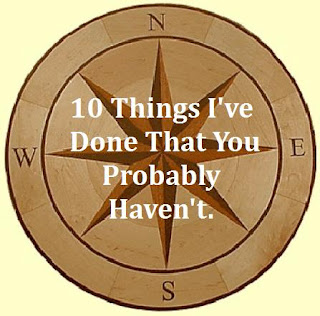 I stumbled across Bev's list at her blog, MY READER'S BLOCK and had so much fun reading it, I thought I'd add my own list. Bev picked up the idea from some previous posters whose links she shares on her post. Feel free to pick up this meme and run with it.


*************************﻿
Ten Things I've Done That You Probably Haven't:
1) A group of us - first graders - were in a documentary when I was a kid. It all had to do with the NYC Library system. I don't recall much except that we were filmed doing 'library type' things. Never saw the film though I searched for it on a NYC vintage docu website a while back. I would love to run across it once of these days. (I remember long black cables trailing along the floor and the large cameras. That's about it.)

2) I attended an art highschool - The School of Industrial Arts in Manhattan, which eventually changed its name to The High School of Art and Design. It also changed it's location. I graduated from the old building in the east 70's with a major in Cartooning. My brother graduated from the new building on east 50 something street a year or so later.
3) In 1960 or '61, I worked as an opaquer for a new batch of Popeye cartoons. Paramount Pictures had a small animation studio on West 45th Street. Didn't like the job much, only lasted six months.
4) Once upon a time, I enrolled in drama school. I was a very shy teenager and thought the lessons would help overcome it. The school was somewhere near the Village, I think - can't remember the name. The actor and TV director, Burt Brinkerhoff was at the helm, I believe. One of my classmates was Frankie (Why Do Fools Fall In Love?) Lymon's brother, Louie. It was fascinating and very intense.
5) I was a contestant on the television quiz show, The Price Is Right. Won a piano. Not that any of us in the family played (except for my long deceased granddmother) but I thought it would be nice to have a piano in case my baby girl wanted to take lessons at some point. But we sold it when we moved out of the city. A decision I regretted for years.
6) While working at Cosmopolitan Magazine in the 1960's, I met Elizabeth Taylor and Richard Burton. (I outlined 'the event' on a piece I did when Taylor passed away.) It was a total thrill.

One of my very favorite fashion spreads was one we worked on with Ann Margret. She was a hoot, so unassuming and fun to be around. I also got to meet, among other famous fashion designers, Bill Blass - the most charming man.

Helen Gurley Brown was the editor in chief and she regularly showed up at the magazine's offices wearing a white mink coat. Very glamorous.

While heading back to the office from a fashion shoot, we once rode down Fifth Avenue in an old fashioned (and very luxurious) Rolls Royce which had been rented for the fashion spread. I felt like Royalty. My first and last time in a Rolls Royce.

Fashion is hard work, but the perks make it all worth while. It was also a lot of fun.


7)  When I was about 19 or so, I traveled cross-country by Greyhound Bus. Alone. (I know!? What was I - crazy?) Part of it was tons of fun - this is such a gorgeous country - but lots of it was excrutiatingly boring. Who knew Ohio had so much corn? But I was young then and what did I know?  I'd decided to go to school in California but after awhile changed my mind and came home. I flew back. The culture shock did me in. I always think if I'd just hung on, I might have been a hippy. Ha!
8) I saw Richard Burton on Broadway in HAMLET. A once in a lifetime experience.
9) A few years ago I saved the life of a hawk one afternoon while out walking my dogs. The hawk had become snared in some prickly bushes (!?) and was hanging upside down, camouflaged pretty well. At first I thought he was dead, but then he turned his head to stare at me. I was chilled to the bone. He was asking me for help. I untangled him - he was quite docile because of shock - and brought him home. Called the wild bird people and they came and got him. They said he didn't look all that bad. They had to keep him for a while though because his wings, I believe, needed some TLC.
(Try to imagine me walking down the street to my house, 2 remarkably calm dogs on leashes and a hawk perched on my arm. A parade.  I can hardly believe it myself.)
10) While in Florida on business years ago, we went skeet shooting off a barge in a lake. I'd never held a gun or rifle or shotgun in my hands before. Ever. I hit a clay pigeon on my third shot and won a prize. Color me AMAZED!
Posted by Yvette at 2:35 PM