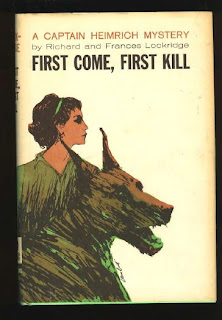 Friday's Forgotten Books is the weekly meme hosted by Patti Abbott at PATTINASE. Don't forget to head on over to Patti's blog to see what other forgotten books other bloggers are posting about today. Here's the link.

FIRST COME, FIRST KILL is not a Mr. and Mrs. North book, in case you were wondering when you saw the Lockridge name. Instead this is my first Captain Heimrich mystery authored by the husband and wife writing team, Frances and Richard Lockridge, who created the more famous series featuring Manhattan sleuthing duo, Pam and Jerry North.

Merton Heimrich is an upstate New York Police Captain, married and the father of a small son, Michael, whom both Merton and his wife Susan, refer to as 'the boy'. The boy is the 'owner' of a huge Great Dane named Colonel. The dog has lots to do with the mystery in FIRST COME, FIRST KILL, primarily because of his curiosity, and his doggy talents for sniffing and scratching.

Though once upon a time I read all the Mr. and Mrs. North books I could get my hands on, they now seem dated to me. (At least the one or two I've read within the last couple of years.) The Heimrich book seems fresher to me.

This is a fairly simple case of murder in which the cover-up and the unexpected identity of the victim, obfuscate the obviousness. Mistaken identity comes into it as well as well one of my favorite mystery gimmicks: dying last words. In this case, the last words of an old handyman who drops dead from a rifle shot in the Heimrich's driveway, in full view of Susan Heimrich and Colonel, waiting for the school bus to drop off 'the boy'.

A fairly low key, though very enjoyable mystery even if I figured out who did what to whom about halfway through. If I find anymore Captain Heimrich books, I'll be reading them.

I first heard about the Heimrich books by reading a review on one the blogs I frequent but damn if I can remember where. I apologize for that.
Posted by Yvette at 9:20 AM