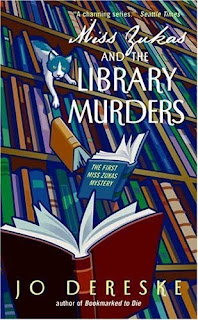 Combine cozy and ascerbic and what do you get? The Miss Zukas mysteries by Jo Dereske. I first began reading these books several years ago and so far, I've read most of them and enjoyed them all.
Wilhelmina Zukas aka Helma Zukas is a librarian (what's more fun than a librarian who solves crimes?) of midwest Lithuanian heritage (ok, what's more fun than a Lithuanian librarian who solves crimes?) who lives in the Pacific Northwest town of Belhaven, outside Seattle. She is a long time librarian at Bellhaven Public Library. The first books in the series were written in the mid-90's before libraries were overrun with computers, though even then, they'd begun their assault. Miss Zukas and her cronies (they more cynically than her) think of themselves as in the business of providing information to library patrons (library-goers are always called 'patrons'), aside, of course, from the process of borrowing books. Miss Zukas, especially when working the phone desk, always responds with patience and fortitude (laced with acerbic wit), no matter how inane the question. She considers it her sworn duty.
I won't get into the changes coming or already established with the advent of computers to libraries across the country, I much prefer to simply enjoy Miss Zukas' crime solving adventures as they stand right now.
These books all depend on the character of Miss Zukas for their entertainment. She is such a well established presence that it's fun just to see how she'll handle any of the plot twists that author Jo Dereske sends her way. Miss Zukas is what used to be known as a spinster of a certain age, she's never married and lives alone in an apartment complex a few miles from the library. In many ways, the Bellhaven library is her life.
In the first book in the series, MISS ZUKAS AND THE LIBRARY MURDERS, you may find yourself not really liking her much, I mean, she is a very rigid personality - everything must be done just so. Spontaenous, she is not. She has her way of dealing with life - apartment kept scrupulously neat, closets and clothing divided a certain way, everything in its own place. She thrives on repetition and order. But as we read further into the series, we begin to understand the excrutiating loneliness at the core of her life. She has solved that problem by dealing with the world in a way she's found that works for her. When I realized that, I began to like her more and more. She's a survivor.
Miss Zukas has a best friend, though maybe the word 'best' is stretching it. Ruth is the exact opposite of Miss Zukas, she is a free-spirited, trouble-making and finding, flamboyant artist (with lovers who come and go) who is always trying to drag Helma off on some hair-brained scheme. They both come from the same area of the mid-west, so that's the basis of their relationship. Helma tolerates Ruth, though in some deeply profound way, I believe she needs Ruth in her life as some sort of balance. Without Ruth, Helma would probably shrivel up and turn into a prune.
Miss Zukas is not fond of animals either, but over the course of the books she finds herself, cohabitating with a cat who takes up residence on her balcony and refuses to leave. She eventually feeds the animal but refuses to name it. How this relationship evolves is part of the charm of the series.
As Helma gets involved in murder, she comes in contact with police detective Wayne Gallant, a divorced, unhappy cop who doesn't know what to make of the strait-laced and very rigid Miss Wilhelmina Zukas. That evolving relationship is fun to watch as well.

Chapter One - The Body in the Fiction Aisle
On Thursday morning, when Jack the janitor stumbled over the body in the Mo-Ne aisle of the fiction stacks, losing his oatmeal and orange juice only a little way from the outreaching shadow of dark blood, Miss Helma Zukas was late for work, a rare occurence that caused her to miss the initial hysteria and excitement of the discovery.
Miss Zukas was just sliding behind the wheel of her Buick, dressed for a day at the public library, all except for the brown oxfords she wore to and from work to save her heels, when she glanced out over Washington Bay and saw sunlight glimmering through the cement gray clouds. Golden beams flickered wanly on the distant crown of Orcas Island. But it was enough of a warning for Helma. She was certain she hadn't pulled the opaque shades that protected her furnishings from the sun.
"I should have known this weather wouldn't last," she said to herself as she climbed the outside stairs to the third floor of the Bayside Arms, avoiding the elevator because Miss Zukas always avoided elevators. She was going to be late for work but it couldn't be helped.
Those few paragraphs give you the beginning of an idea who Miss Zukas is. The reason these books work is because Miss Zukas, as a creation, works.
Far as I know, these books are not available in hardcover, only in paperback. But they are still in print and worth looking for. The first three books together would make a great Christmas present for yourself or for the cozy mystery lover on your list.
Read more about Jo Dereske and her books here.
Posted by Yvette at 12:58 PM