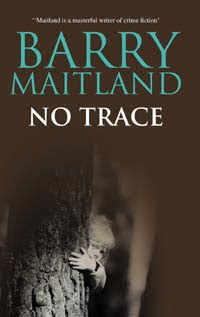 I've never read Barry Maitland, so I didn't know what to expect. (Embarrassed to say I'd never even heard of him before.) Although he was very highly recommended on the Books to the Ceiling blog, you just never know: one person's favorite book is often another person's you gotta' be kidding me. (However, since I've struck gold with Roberta's recommendation of Maitland, I'm going to be trying John Harvey's books as well.) I like police procedurals, especially police procedurals that take place in London or thereabouts, so I jumped right in with the 8th book in the series: No Trace. (Published in 2004.) I could not have asked for a better introduction to the Brock and Kolla mysteries. Long story, short: I will definitely be reading more of Barry Maitland.

The plot of No Trace concerns child abduction, so the story is gut-wrenching from beginning to end. Six year old Tracey Rudd goes missing from the London flat/studio of her artist father Gabriel Rudd. Rudd is an ego-driven, contemporary artist notorious for his flare for publicity and love of the grotesque - his most famous work is based on the suicide of his wife five years before. This time around Rudd is not shy about using the disappearance of his daughter as inspiration for a new and spectacular work of installation art meant to jump-start his fading popularity.

Since Tracey is the third little girl abducted from a London neighborhood, the press is naturally in a frenzy, especially once they realize what Tracey's grieving father is up to. Soon, Northcote Square, the enclave of eccentric artists and bohemians in which Gabriel Rudd lives and works - his dealer and gallery are right across the street -becomes a ghoulish tourist attraction teeming with artist groupies, tourists, the press and the police.

Chief Inspector David Brock and Detective Sergeant Kathy Kolla have little enough to go on: no witnesses and no clues at the hectic crime scene. Tracy Rudd has seemingly disappeared without a trace.

Time is of the essence as Brock and Kolla try to unravel the puzzle, unsure if the current kidnapping is part of an overall plot or a copycat crime. The grim reality is that as more time passes, the hope of finding the little girls alive, dwindles. Then, within Northcote Square, amid the buzz and the crowds and the ugly rumors, murder occurs to confuse the issue. A murder that may or may not be connected to the original kidnappings.

As the bodies pile up, the solution to the initial crimes seems apparent. But is it? One of the main aspects of No Trace is the devilish way that author Maitland gloves one solution inside an another inside another. Just when you think you have an answer, another question pops up.
This neat trick is slightly reminiscent of Jeffrey Deaver's use of multiple 'endings'. When done well, this is a very intriguing way to end a mystery. Maitland does it very well.

I like the stolid presence of Chief Inspector Brock, an older man with years of police experience, devoted to his job even at the expense of his personal life. I get the same feeling about Sergeant Kolla, devoted to her job as well, though her personal life seems to be looking up by the end of the book. This is an unusual combo, I think: older man, younger woman partner. But it works well and without much sentimentality. There is affection and respect, but no romantic inclination, at least as far as this book is concerned. Matiland's no nonsense style of writing suits the police procedural very well. We get emotion and mania, but only just so. No Trace is an ugly story about not-very-nice people doing some very nasty things, but it never goes over the top to the point that you want to drop the book and go wash your hands and rinse out your brain. Except for, maybe, one or two scenes, but I overcame the urge.

If you're not familiar with this series of books either, then I recommend you acquaint yourselves asap, especially if you like a good murder mystery/police procedural with solid, well-written characters and a tricky, involving, can't-put-the-book-down plot.

Check here for more on Barry Maitland and his books.
Posted by Yvette at 12:02 PM