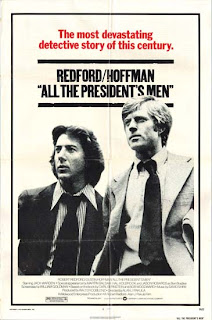 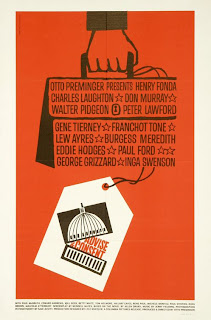 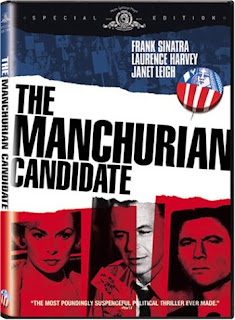 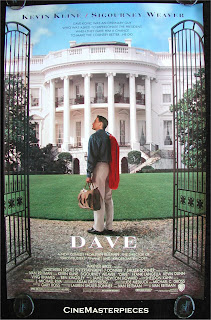 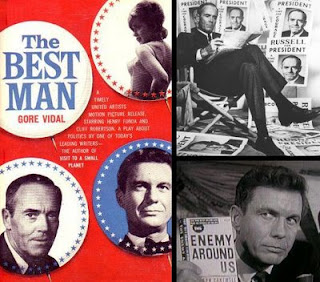 I was going to do a list of My Favorite Political Books, but then I remembered that I don't read political books. Well, occasionally over the years, but none that I recall fondly except:

All The President's Men by Carl Bernstein and Bob Woodward and the Pulitzer Prize winning potboiler, Advise and Consent by Allen Drury. Does The Pelican Brief by John Grisham count as a political book? And I do have warm feelings about Carl Sandburg's Lincoln biography which I read in school a million years ago and The Making of the President 1960. I have a few political books on my shelves, but for whatever reason I've yet to read them. My brother loaned me The Defining Moment by Jonathan Alter and it's still sitting here. Maybe it's time to read it.
So, on to My 5 Favorite Political Films:
All the President's Men Starring Robert Redford and Dustin Hoffman as Washington Post political reporters Woodward and Bernstein - the men and the paper who helped bring down Nixon. To my mind, the greatest political movie of them all.
The Best Man Starring Henry Fonda, Cliff Robertson, Shelly Berman (playing one of the slimiest and creepiest characters ever), Edie Adams, Lee Tracy and Kevin McCarthy, to name just a few. Recently re-watched this and it's just as good as ever, though some of the acting has the histrionic quality of the time. Fonda is superb as a principled man running for the Presidency. Gore Vidal wrote the book and screenplay.
Advise and Consent Starring Henry Fonda (a trend?), Don Murray, Charles Laughton, Franchot Tone, Peter Lawford, Walter Pidgeon and Lew Ayres. The often overlooked and underappreciated Don Murray is wonderful in the role of a young Senator (or congressman, can't remember) with a secret that will destroy his career. Laughton, too, is utterly fabulous as a Southern Senatorial kingpin. Directed by Otto Preminger.

Dave Starring Kevin Kline and Sigourney Weaver. A delightfully witty political comedy with a heart. I loved the whole presposterousness of it. Imagine a President who lies comatose and a guy who just happens to be his spitting image called in to replace him before a major political event. A guy who proves to be more competent, more caring and more politically savy than the original. Imagine the First Lady falling for this guy as well. Fun.
The Manchurian Candidate Starring Frank Sinatra, Lawrence Harvey, Janet Leigh and Angela Lansbury. Superb suspense as well as, political thriller. Several soldiers are captured and brainwashed during the Korean War - the after-effects scenes are particularly theatrical and creepily effective. Sent back home as sleeper agents, Lawrence Harvey is the one the commies are counting on to assassinate a Presidential candidate. Angela Lansbury is the mother of all evil mothers. This film is a must-see.
I would have added a sixth film, Charlie Wilson's War starring Tom Hanks, Julia Roberts and Phillip Seymour Hoffman (brilliant in this), but I couldn't get the damn movie poster to post up above and I like things nice and tidy.
Posted by Yvette at 2:48 PM