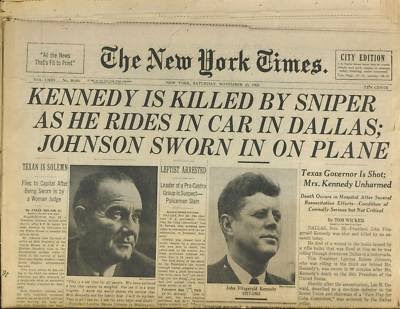 November 22, 1963: Such a sad and shocking day. I remember it vividly still. Not a fun way to begin this week, but it is what it is.

Meant to post this earlier, I seem to be playing catch-up today. I do have some memories of the day I'd like to talk about. Though even now, these many years later, it is difficult to remember without sadness and anger taking over - still.

I was 21 in 1963, working at Decca Records on Park and 45th, in the art department. There were no tvs available except for a small portable in the manager's office (b/w of course). Truth is, none of us knew he had a tv in there, they weren't as ubiquitous then as now.

It was near lunch time or early mid-afternoon, can't remember exactly, when somehow the news began to filter in on someone's transistor radio. At the time the news outlets were scattered and there were only three networks who had the sort of coverage needed for a major crisis. They were going with the story that the President had been shot but was still alive in the hospital. The truth, of course, was that JFK had already died in the car.

As more and more of the story broke, everyone began buzzing, gathering in the hallway as people came in from outside errands or lunch or whatever. When we realized that the manager had turned on his little tv, a few of us went into his office and heard and saw Walter Cronkite declare the President dead - blinking back tears. Cronkite's crying made the news even more unbearable. I mean, if HE couldn't bear it, how could we?

A couple of the women around me began weeping. I was too stunned and I remember my knees giving out and I plopped down onto a chair that, luckily, happened to be nearby. I could not say anything. I mean, what on earth was there to say? None of us could think what to say.

The company realized we were not going to be any good to work that day so they sent us home.
This happened all over the city. We all thought war might be about to break out because no one knew who was involved in the assassination. There were very few details available. We worried that something might happen to the Vice President or Mrs. Kennedy, there were all sorts of wild-eyed ideas and questions no one had answers to. I kept thinking it had to be some sort of crazy mistake.

On the subway going home, most everyone had a newspaper, the headlines in angry black and white, so I knew there was no mistake. The President was dead. Sitting in the subway, there was no talking, I guess no one wanted to say anything that might make the day real. I remember people staring at each other than down at the newspaper pages then glancing up, then staring at nothing. The whole ride was riddled with unreality.

I walked home from the station and it was like, well, what do we do now? Needless to say, our tv was on for the next week or so, the whole family in front of it. The funeral march - the black horse with the boots backward in the stirrups as had been done in Lincoln's day, the burial - the lighting of the flame, the killing of Lee Harvey Oswald on live television by Jack Ruby. (Can't remember which came first.) My memories of the day are imperfect.

It was an enormously heartbreaking yet surreal experience. I truly thought the world had come to an end. It was the loss of our innocence, you see. That was what the assassination meant for my generation: a great loss of innocence. We thought ourselves invulnerable, but if they could get JFK, they could get anyone. A deep feeling of fear and anger settled on the country. The thing was, then and now, no one could tell us WHY THIS HAD HAPPENED.
Posted by Yvette at 9:39 AM

Email ThisBlogThis!Share to TwitterShare to FacebookShare to Pinterest
Labels: JFK