What I Watched Last Night

No, it wasn't the Olympics Closing Ceremonies (I no longer have cable so the NBC online watch was not available to me). Though I'm sure at some point youtube will come to the rescue. And best of all, I won't have to listen to the inane chatter of the commentators.

What I watched last night was the AMC series, THE KILLING, a gritty detective show set in the gray, rain-washed lower middle class neighborhoods of Seattle. A gorgeous city with fantastic views of the water, but here we're treated to scenes of soggy, grungy, teenagers with strange metal parts protruding from lips, ears and noses. Dead end kids messing about with skate-boards and drugs and you name it -  an eerie and unpleasant sub-culture with its own bizarre rules.

Based on a Danish show, this is the grim story of a young girl's murder and its widening repercussions.  Three story threads combine to make a whole: the murder and the cops who will hunt for the killer, the girl's grief-stricken family and a mayoral political campaign, whose dynamic candidate (Billy Campbell) has been keeping secrets. (And you know where that leads.)

The show is a bit slow going at first, but as suspects are grilled and discarded and the evidence begins to form a picture, I was hooked. An added plus: the acting by everyone involved is sensational, as is the casting.

The lead detective, Sarah Linden (played wonderfully by an actress I'm not familiar with, Mireille Enos) is on her last day of duty - she's leaving the Seattle Police Force, heading down south to California to get married. Sarah is a woman under personal pressure, she is uprooting her sullen young son (who isn't happy about it at all) and opting for a major life-change. Her bags are packed, her office cleared. In fact, her replacement, Stephen Holder (another terrific actor, Joel Kinnaman) has just shown up with a box full of his belongings. Don't let the door hit you on the way out, Sarah. 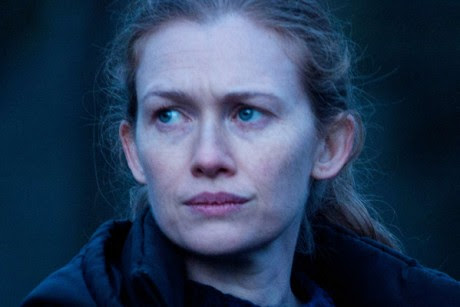 Except that her boss hasn't signed the discharge papers yet and he wants her to look at one final case and show Holder the ropes - he's a transfer from Narcotics. Officially she has until the end of the day and then she can catch her plane and go join her fiancee.

But once Sarah finds the body of Rosie Larsen, a missing teenager, the plot thickens. Her plane reservations keep getting cancelled and re-scheduled and cancelled and re-scheduled. Sarah has doubts about Holder's ability to deal with fall-out. He has rather a 'bull in a china shop' air about him and seems to lack the sensibility to deal with the girl's parents (Michelle Forbes and Brent Sexton) who are dazed with grief.

As usual in these cases, the murdered girl had secrets. (Hey, what seventeen year old doesn't? But in general, not these sorts of secrets.) And As it turns out, the father, Stan Larsen, has his own dark history to deal with. (There's nothing like a murder case for shining a light on every one's peccadilloes.) Though he is almost immediately dismissed as a suspect, Stan's impatience with the cops' seeming inability to catch his daughter's killer only makes a bad situation worse.

There is a lot going on here and some of the time you lose track of the main issue which is: the murder of a seventeen year old girl. Cutting through all the bulls**t is one dogged cop and her slightly resentful side-kick who isn't happy being relegated to secondary status. (And by the way, did you know you could say bulls**t on TV now? I didn't. But it's okay, better than the F word.)

Then, as the case seems about to be wrapped up, it falls apart. Tangling matters, the Feds show up at a potential crime scene and grab all the evidence. Things just get muddier as the rain continues to fall and leaks in the Mayoral campaign as well as down at the cop shop add to the murk of the situation. Just what the heck is going on here?

As Sarah's long lost ex-husband shows up out of the blue to add to the building pressures, she is drawn ever deeper, day by day, into a murder case filled with false leads and an ever-widening list of suspects. And just when I'm thinking the wedding date had better be postponed, the case is apparently wrapped. The police have their man and Sarah and her son board a plane for California.

Except that.....Well, you'll have to watch to see the smasheroo of an ending.

Okay,  I admit fast-forwarding a bit through some of the family histrionics as well as the political machinations. (Those scenes could have been trimmed a bit.) But other than that this is one hell of a murder mystery. I guarantee you will not see the end coming.

View THE KILLING trailer here.
Posted by Yvette at 2:16 PM