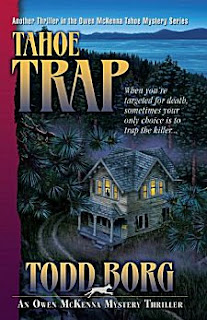 Somehow, I'd never read any of the Owen McKenna series of books before the author, Todd Borg, sent me a copy for possible review. In fact, I'd never known anything about that area of the U.S. except that there is a lake named Tahoe, lots of expensive homes, a resort and gambling casino (I think). The problem with a lot of locally situated books is that most of us (not in the general area) never get to read them because the authors tend to get pigeon-holed as regional.

So I'm glad I had a chance to read this, the tenth in the series - I mean, where have I been?

A small boy witnesses a possible murder and is trapped in the bed of the killers' pick-up as it whisks away from the lonely, wooded crime scene. The boy is eight years old and an illegal immigrant, trapped not only under the topper of a truck fleeing through the night, but also outside the U.S. legal system and frightened out of his wits. His 'foster' mom, Cassie, presumably lies dead on a country road.

Owen McKenna, ex-cop, current private eye and Tahoe resident, gets a frantic wake-up call in the middle of the night. It is the boy, Paco Ipar, calling on a cell phone from his hiding place. McKenna and the boy have never met but the boy had been told by Cassie to call McKenna in case there was ever any trouble. Paco pleads with McKenna to come find him.

Out into the night goes McKenna, desperate to save a small boy.

What happens next is a constantly surprising series of events involving murder, kidnapping, two nasty hired killers from Vegas, the unsparing illegal immigrant laws in which children like Paco fall through the cracks (frustrating and heartbreaking, really), organic farming (in which we learn that tomatoes and other so-called vegetables with seeds are really fruits - who knew?) and Basque nationality. There is a dandy red herring which led me up the garden path - so to speak - and the final motivation of the killer comes as a major surprise. (I love when that happens.)

Along the way, we find out how to make fiendish use of stinging red ants and a concoction of pepper spray (from organic peppers, of course) hot enough to fell a couple of very bad men. Did I fail to mention that McKenna is a very clever fellow? We also find out some interesting tomato lore as the missing Cassie has managed to create a strain of tomato that ripens by itself while being shipped, needing no gas to do the job. Oh, you didn't know that the regular tomatoes you find in the supermarket are 'gassed' to make them ripen? I didn't either. Ugh.

Lots of interesting stuff going on in this fast-paced suspenseful mystery I am definitely recommending and you will want to read. In fact, I've added the rest of the books in this series to my TBR list for future getting acquainted.

Oh, and if all this hasn't peaked your interest yet, there's also a Harlequin Great Dane named Spot. McKenna's extremely large dog, along for the ride.

To learn about Todd Borg and see a full list of his Owen McKenna books, please use this link.