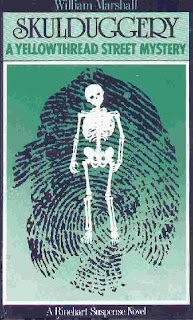 I've had a couple of William Marshall's Yellowthread Street books lying around on my shelves for what seems like ages and there they remained unread. Until a few days ago SKULDUGGERY suddenly showed up in a pile of books I was sorting and here we are.

It's Friday and I'm late with my entry, but it's Forgotten Books day all day. Patti Abbott has off, so Todd Mason is doing the link collecting and display duties. Don't forget to check in and see what other forgotten (or simply overlooked) books other bloggers are chatting about today.

William Marshall is a prolific Australian writer with sixteen books in this particular series. To check out all of Marshall's titles, Yellowthread Street and otherwise, please use this link.

Yellowthread, a shabby street set among the back alleys of the Hong Bay section of Hong Kong is the address of the local - and not very much feared - constabulary. A dreary, neglected building in need of repair serves as headquarters to a harried bunch of locals who do their best to keep law and order in this colorfully byzantine area of the world.

This is Hong Kong 1979, Britannia rules. Brit officers are in charge though discipline is not as stiff-upper-lip as one might think. It is a very eccentric setting for a lively police procedural which most of the time had me rolling my eyes and laughing at the slighly bizarre (okay, not so slightly) doings. Author Marshall has an assured way of handling absurdity as if it were commonplace and creating memorable characters who deal with life in this exotic and complicated locale with as much aplomb as they dare to.

1) Muggings in a two person elevator in a building where the rich live on the top three or four floors and the rest below. The problem is that the coshing and money snatching occur when the elevator indicates it is on the third floor landing even though the door on that landing has been nailed shut by inhabitants tired of being mugged. An ever more frustrated Sgt. Auden has been riding up and down in the elevator for six straight hours or more, waiting to be mugged while trying to figure out how it's done. There are no clues since the muggees have not been able to describe their attacker.

2) The Deaf and Dumb Gang has struck again. Handicapped robbers (one of them blind) who cannot or will not speak and apparently cannot hear are robbing jewelers at an alarming rate. Hopeful of rounding up the gang, the police place a dragnet (well, sort of) around a store likely to be robbed and wait for the gang to show up. Inside the store, the easily distracted Sgt. Spencer sits on the stairs in the storeroom, shotgun in hand, ready to spring into action.

Mr. Fan, owner of P.P. Fan Jewelers, counts his money trepidaciously and none too optimistically, while giving Spencer, sitting behind a half open door, a lecture on career opportunities.

3) A 20 year old skeleton washes up on a beached wooden raft, ankles tied and accompanied by farm fresh sweet potatoes, a dead fish, a set of false teeth and a ten inch length of iron drain pipe. It's murder all right. The problem is the bones belong to an American still very much alive.

Just another typical day for the cops of Yellowthread Street station.

Time to hunt around for that other William Marshall book I'm sure is around here somewhere.