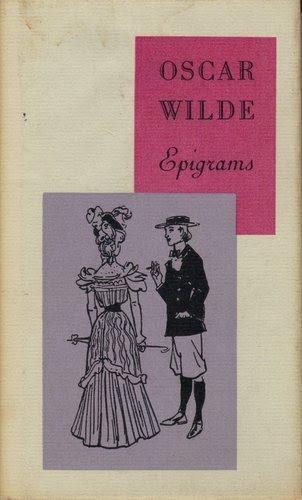 It's Friday's Forgotten Books over at Patti Abbott's blog, Pattinase. And while Oscar Wilde doesn't qualify as forgotten, it never hurts to take another look at his celebrated wit and wisdom. Especially since 'wit' is so sorely lacking in the world these days.

Don't forget to check in at Patti's and check out the many links to other Forgotten (or Overlooked) Books. There's always an eclectic mix.

I've had this little book (published by the Peter Pauper Press) since I was a kid in high school. It's one of the few books which instantly sets me back in a different time. How it's survived the many years of being hauled around from pillar to post and places in-between remains a mystery. I have very few things from the Jurassic era of my youth, this book is one of them.

It's an small anthology of Oscar Wilde's more famous (and some, not so) bits of wisdom culled from his conversation and from his plays. I don't have to tell you much about Wilde, I'm assuming you know he was one of the great Irish playwrights, poets and general bon vivants of the Victorian age. He was also a homosexual at a time when English law claimed this to be a crime punishable by imprisonment. Read more about Oscar Wilde here.

Some of my favorite Wilde-isms:

'The truth is rarely pure and never simple. Modern life would be very tedious if it were either, and modern literature an impossibility.'

'The good end happily, the bad unhappily. That is what fiction means.'

'A cynic is a man who knows the price of everything and the value of nothing.'

'The world has grown suspicious of anything that looks like a happy married life.'

'My experience is that as soon as people are old enough to know better, they don't know anything at all.'

'Actions are the first tragedies in life, words are the second. Words are perhaps the worst. Words are merciless.'

'One should always play fairly when one has the winning cards.'

'The only thing to do with good advice is to pass it on. It is never of any use to oneself.'

"I can believe anything, provided it's incredible.'

'...nothing spoils romance so much as a sense of humor in the woman.'

'To get into the best society nowadays, one has either to feed people, amuse people, or shock people.'

'The public is wonderfully tolerant. It forgives everything except genius.'

'Life makes us pay too high a price for its wares, and we purchase the meanest of its secrets at a cost that is monstrous and infinite.'

'We are all in the gutter, but some of us are looking at the stars.'