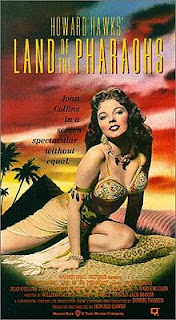 FFT is a weekly meme hosted by Todd Mason at his blog, Sweet Freedom. So don't forget to head on over to link central and see what films, television or other audio/visuals, other bloggers are talking about today. We're an eclectic bunch.

When you think of legendary director Howard Hawks, the first film that doesn't pop to mind is LAND OF THE PHARAOHS, a sun, sand and slaves pot-boiler written by (yes, it's true) William Faulkner (and two other lesser known writers). The film has a heart-pounding (and strangely catchy) musical score by the one and only Dimitri Tiomkin to recommend it as well. It was shot in Egypt and in a Rome studio, and had a cast of thousands, literally. This was back in the good old days of spectacular epics ala BEN-HUR, THE TEN COMMANDMENTS and whatnot - when this sort of thing was feasible.

Can anyone take Joan Collins seriously as Princess Nelifer, captured desert royalty dropped at Pharaoh's feet and almost immediately doing her undulating best to win him over to her bed and his board? Not really. But what the heck, it's so much fun to watch her work her slinky wiles around the palace - a heavy breathing femme fatale with murderous inclinations and a mummified heart. Not to mention, a great deal of body make-up. 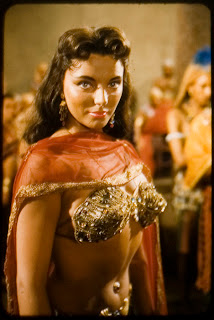 It's that little jewel in her belly-button that does it. How can Khufu resist?

The hapless Pharaoh Khufu (or Cheops) is played by British stalwart, Jack Hawkins, a fine actor here called upon to play second-banana to a naughty chit of a girl out to rule Egypt by hook or by crook. He mostly holds his own and one wonders what was going through his mind in some of the scenes where he must fall victim to the evil machinations of a teenage temptress in skimpy attire and a piquant pout.

The Pharoah, you see, is mostly concerned with the trappings of his after-life though attention to his rampaging libido might have served him to better purpose. Yes, he falls for the vampish allure of the bad tempered little princess. No big surprise there. 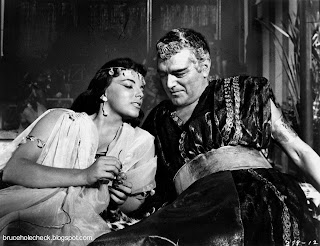 He makes her his number two wife. But unbeknownst to Pharaoh, she is determined to be number one. Really, you'd think the guy would catch on, I mean he's a grown man,  a warrior, a feared and beloved leader of a nation, an Egyptian god, for goodness' sake - presumably he has been around the block a few times. But no, he is putty in Princess Nelifer's capable hands. Men. Sometimes you just have to shake your head.

The soap opera doings of the Pharaoh and his bride are played out against the work of building the great pyramid of Egypt. The tomb of this particular man/god consumes Khufu night and day (when he's not being consumed by....well, you know) and to that end he is fortunate enough to have, among his captured slaves, Vashtar, an architect (played by the always imposing James Robertson Justice). 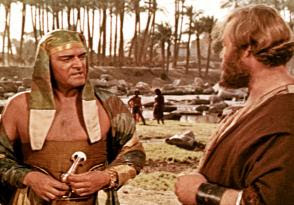 If you make my tomb safe from looters, you'll die anyway, but your family won't.

Vashtar is put to work designing some sort of fail-proof mechanism that will prevent looters from ever entering the final resting place of Khufu. His son Senta (Dewey Martin) is there to help as well. Vashtar must take an oath not to reveal the secret of the tomb to anyone and upon the death of the Pharoah and his placement in the tomb, Vashtar's son and family will go free. (If I'm remembering correctly. It's been a while since I saw the movie.) But Vashtar must die so that the secret stays safe for eternity. Sounds like a plan.

Of course, the best-laid plans of mice and men, you know how that goes.

In the meantime, while thousands of slaves toil in the hot desert sun, Princess Nelifer is up to no good behind gilded palace walls. In her plot, she engages the smoldering attentions of a weak-willed palace guard (Sidney Chaplin - son of Charles). 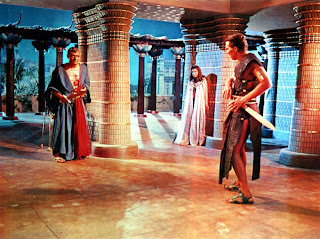 It's all very opera-worthy and Dimitri Tiomkin makes extra sure to musically define all the heavy-breathing and chicanery. The only thing missing is the singing. No wait, we get a singing chorus made up of crowds of Egyptian subjects who gather to hail the Pharaoh alive or dead. I still remember the tune. I did say some of the music was catchy.

Now we come to the truly spectacular ending when all of Nelifer's evil machinations have come to fruition. All I'll say is that the Pharaoh's intelligent (and too old to be affected by female pulchritude) High Priest and life-long friend, Hamar (Alex Minotis) has distrusted Nelifer from the beginning and here in the end, he takes his and Egypt's revenge on the sultry strumpet. She gets her just desserts in a truly horrific way. (And no blood-letting.)

Oh, and the minister allows the architect (now old and blind) and his family their freedom, since he reasons, rightly, that once the mechanism goes into play in the pyramid, it doesn't matter who knows what. It will be impregnable. A mighty fine B-movie epic and I'm told that the color of the current dvd is brilliant - always a good thing. It's on my queue as we speak.

Link to the movie's trailer which shows very dark. I hope the dvd doesn't follow suit.

Email ThisBlogThis!Share to TwitterShare to FacebookShare to Pinterest
Labels: Joan Collins, Land of the Pharaohs, Movies