The Second Ode to A Mustache : MORE Movie Pencil Thins 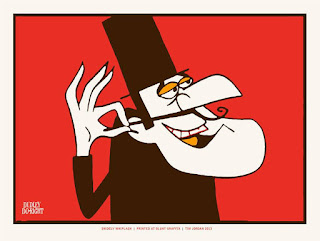 I believe my original Ode to A Pencil Thin Mustache post is still my most popular post. I love that so many movie mavens get my sense of humor and share my love of pencil thin lip fuzz. And so in the furtherance of movie mustache love, here is my second Pencil Thin post created after I realized that I was, WAY overdue in the Pencil Thin Stakes. And also because I was chastised by a reader for leaving Douglas Fairbanks, Jr. off the original list. 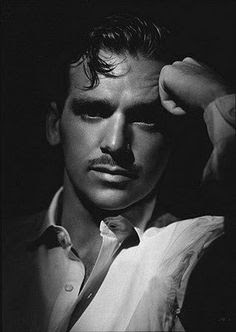 Douglas Fairbanks, Jr. is looking particularly elegant and fetching in this gorgeous photo by George Hurrell. Son of a silent film giant, Douglas Fairbanks, Jr. never did quite rise to the stardom level of his iconic dad, but did quite good enough career-wise. (He was also a highly decorated Naval officer.) I loved him best in SINBAD THE SAILOR with Maureen O'Hara.

Fairbanks remains one of the most elegantly groomed and tailored stars of that era (in fact, of any era). He is also one of the very few actors whom I could have seen playing in The Thin Man movies had William Powell not been available. 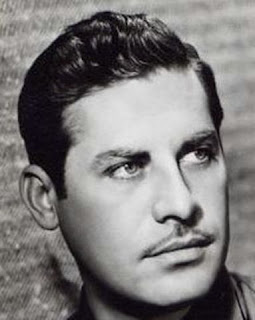 In my view, John Hodiak, an actor who died too young (at just 41) was one of those leading men called into action when a slight oddity in the lead or secondary role was needed. He somehow managed to radiate strength and weakness in equal amounts - not that easy to do. And he usually looked as if he were hibernating some godawful truth. There's just something about his face that tells you this is not a man to turn to for cozy warmth. Without the 'stache his face just looked all at sea and kind of blank. Opposite Judy Garland in THE HARVEY GIRLS, he intimidated almost without meaning to and yet somehow made it work. Though in truth he looked better alongside statuesque Angela Lansbury who played the tough saloon girl he dumps for diminutive Judy. 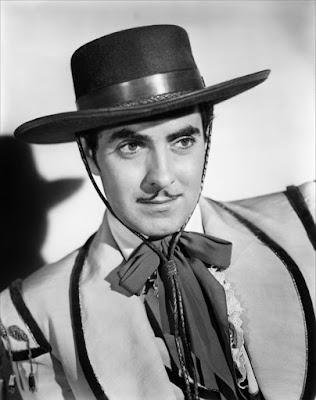 Tyrone Power, always an underrated actor, never looked quite right minus his mustache - he was too beautiful, too vulnerable and fragile looking. Here he is in THE MARK OF ZORRO (in which he is both insouciant and dangerous), playing both the foppish dilettante and the athletic righter of wrongs in old California. Power also wore a mustache when going the swash and buckle route, which he did in several films. But Power was not physically imposing where one would expect a pirate to be - think Erroll Flynn. Actually neither was John Payne (who also played at pirates), but that's a story for another day. Power died young at the age of 44 of a heart attack while filming SOLOMON AND SHEBA in Spain. 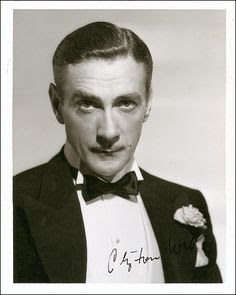 Well, we all loved the very elegant Clifton Webb as the eccentric and mean-spirited Waldo Lydecker in LAURA, but he played a variety of roles in his long and varied acting life, usually with mustache in place. Webb had one of those larger-than-life personas that tended to take over the screen even in a group scene and don't think he didn't know it. I loved him best as Ewen Montagu in the superb spy thriller, THE MAN WHO NEVER WAS and as the doomed, aging writer in THREE COINS IN THE FOUNTAIN alongside Dorothy McGuire - both actors make the most of a lackluster script and manage to steal the film away from their younger and very bland co-stars. I also loved Webb in the film about marching king, John Phillip Sousa, which I kind of remember seeing in the theater. I'm a big fan of marching music. 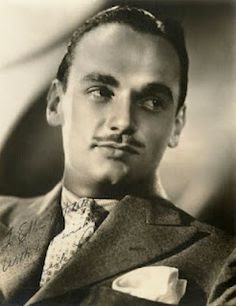 The oh-so-wonderful Erik Rhodes (no, not the porn star - be warned if you google the name) was a tremendously funny actor who practically stole any movie he was ever in for more than ten minutes. He managed to hold his own opposite Fred Astaire and Ginger Rogers in THE GAY DIVORCEE and TOP HAT, in one as a paid divorce co-respondent (dues paying member of the co-respondent union) and in the other a fashion designer who refers to himself in the third person. Two hilarious performances which must be seen to be believed - Rhodes' onscreen persona was that of a foreign fellow slightly at sea, language-wise and the mustache was part of his slightly sleazy on-screen charm - so hard to imagine him without it. 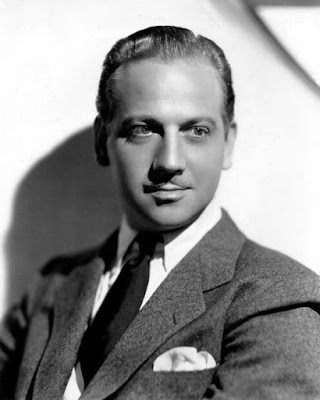 Academy Award winning actor, Melvyn Douglas, was the best first and second banana leading man in the business. A very enjoyable screen presence, he had the kind of face that simply begged for a mustache so he was rarely seen without it - at least that I can remember. He always entertained with his performances but most of the time I got the impression that he'd stopped off at the studio for a few scenes on his way to somewhere else. In fact, I read that he resented the lightweight parts he was offered in the early years of his career. (Though he tended to be awfully charming in those roles.)

In my view, the older Douglas got, the better his acting. Most especially memorable were his Oscar winning supporting roles in HUD (1963), playing Paul Newman's father and later in BEING THERE (1979) with Peter Sellers and Shirley MacLaine for which he won his second Oscar. 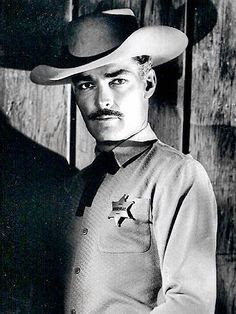 In my biased view, John Russell was one of the handsomest men in the history of movies; his hard, chiseled good looks defied categorization. He also had a rich, deep speaking voice - swoon. Russell never became a Movie Star in the sense that some of his contemporaries did though during the early days of television he starred in the Warner Bros. show LAWMAN, as a wooden faced marshal who kept the peace in his town with the help of youthful Peter Brown as his deputy. In films Russell mostly played bad guys and to my eye, always seemed out of place in modern day clothing.

As a teenager I fell madly in love with John Russell when he played the Hunkpapa Sioux Indian chief, Gall (sans mustache, naturally) in YELLOWSTONE KELLY, a western starring Clint Walker who was not a bad looker himself. The problem with Russell was that he had limited acting scope but oh, who cared, he was so broodingly good looking. One of those rare few who didn't need the mustache to carry the day, though it did add a certain warmth to his often cold film persona. 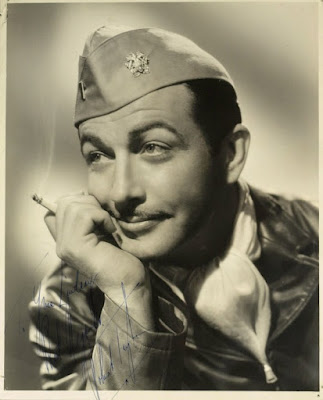 Robert Taylor was a huge star when being a huge star meant something. In the beginning he was almost as good looking as Tyrone Power (evidence: see CAMILLE where Taylor played opposite Great Garbo and it was hard to tell who was the better looking), but his looks seemed to be cast in a slightly more rugged vein than Power. Though his acting chops were not of top caliber form, he often managed to overcome a tendency to emulate wood. Under questioning during the outrageous (and unfair) McCarthy Hearings (meant to roust Communists from the Hollywood movie community, but all it did was ruin lives and careers) Taylor apparently named some actors he said he 'thought' were communists because of their behavior during SAG meetings. He didn't age well and died relatively young, at the age of 57, from lung cancer. 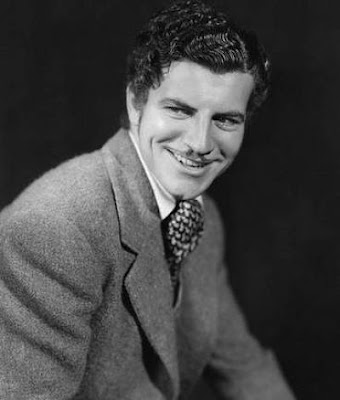 Robert Preston didn't always wear a mustache onscreen, but when he did I think he looked much more dashing than when he didn't. Preston was most famous, I suppose, for playing the lead in THE MUSIC MAN on Broadway, for which he'd won a Tony (he also played the role in the film adaptation). I remember him most as Centauri, the endearing, other-worldly guide who helps turn a young, trailer-park teen into a warrior in THE LAST STARFIGHTER - a wonderful part which he played with obvious relish. I also loved him as the flamboyant gay impresario in VICTOR, VICTORIA. 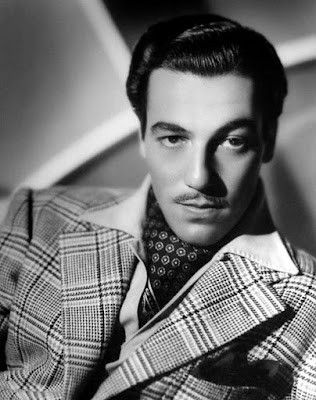 Oh look at this sinister picture of Cesar Romero - Latin lover extraordinaire and gay icon. A charming man and competent actor who over the years squired a bevy of beauties to all important Hollywood events only to remain a 'confirmed bachelor' all his days. Of course he spent most of his life in the closet, self-protection in the days when being gay meant the death of a career. Romero aged wonderfully (amassing a gorgeous head of white hair) and always seemed to me to be a true gentleman delighted with life. I know he played The Joker in the Batman series on early television with Adam West, but I remember Romero best as the sulky gigolo groom in THE THIN MAN with William Powell and also as the elegant psychic in CHARLIE CHAN ON TREASURE ISLAND.

Mandrake the Magician back in the day when men slicked their hair and flexed their eyebrows in the most alarmingly fetching way. (Nobody does this anymore - have you noticed? Slicking and flexing are lost arts.)  This is such a gorgeous drawing that I had to include it on my list even if the movie version was live action starring Warren Hull WITHOUT a mustache - obviously a major tonsorial faux pas. I'm not sure who the artist of this particular drawing was, perhaps Phil Davis or Fred Fredericks.

First created in 1934 by Lee Walker (who also created The Phantom), Mandrake and his cohort, Prince Lothar, were an unlikely but very popular crime stopping duo, a strip which continues to the present day. In 1939 the characters' adventures were turned into a serial by Columbia Pictures. And later, an unsold television pilot filmed mostly in Bermuda starred real life magician Coe Norton WITH mustache and the always imposing Woody Strode (who later went on to a Hollywood career) as Prince Lothar.

So there you have them, m'dears. But please don't expect a third installment, I think I've probably exhausted the pencil thin mustache annals of Hollywood heart throbs.
Posted by Yvette at 12:30 AM