Friday Forgotten Book: THE DOORS OF SLEEP (1955) by Thurman Warriner 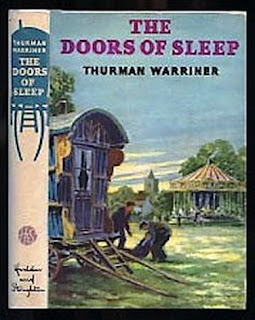 I know nothing whatever about this author except that he was an English writer who wrote mysteries and most of them are impossible to find. (Though the ones he wrote under the pseudonym of Simon Troy are easier to find in this country.) But thanks to my friend John at Pretty Sinister Books, I am now the proud owner of a Penguin copy of THE DOORS OF SLEEP (as unprepossessing a mystery title as anyone can imagine but there's method to the madness) and even more importantly, I loved reading it and getting to meet the quirky crime-solving, twosome, Mr. Ambo and Archdeacon Toft.

Since John reviewed this just last month on his blog, all I'm going to do is link to his post and let you read (if you haven't already) his excellent review. He will reveal to you the ample delights in store.

THE DOORS OF SLEEP is a nice, old fashioned good against evil type plot, the evil part being troweled on with a heavy hand (not that I mind that) in the person of one rather vile individual named Charlesworth Vinery. A creature who positively dotes on nasty behavior, especially towards his young and saintly wife who for reasons unknown hasn't yet stuck a knife in him and run off with his younger brother, the composer. She and the younger he are bound by honor though her hubby is bound by nothing. He even keeps a room in the house dedicated to evil thoughts (or some such thing) - a room known as the 'the sanctuary' - yeah a very nasty type is Mr. Vinery.

WORSE YET, he was known, once upon a time, to have killed a cat, or at least so the rumor goes. I mean, can it get any worse than that?

How is such a man to be dealt with? More importantly, why did his wife marry him in the first place? That part of the story isn't fleshed out much, and since we enter the story when all this is a fait accompli, we push forward from there.

The elderly Mr. Ambo and his pal, the also elderly and rather rotund, Archdeacon Toft have been invited by Vinery for a few days stay. Mr. Ambo (whom I instantly adored) has known the heroine since she was a child and is worried not only for her safety but for her sanity. Something has to be done, but what?

Okay, enough from me - go read John's review, he has all the plot details - the stuff I always forget.

In truth, THE DOORS OF SLEEP is a cozy masquerading as a dark tale of terror. Which it also kind of is. You'll see.

Since it's Friday, it's Forgotten Book Day over at author Patricia Abbott's blog, Pattinase Don't forget to check in and see what other forgotten or overlooked books other bloggers are talking about today.