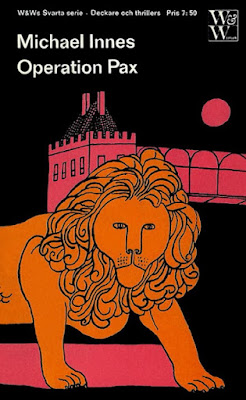 I know, I know, I promised no more Michael Innes.  I lied.

So here we are again. And you're probably relieved to learn that I'm not reviewing THE CASE OF THE JOURNEYING BOY as well, another amazingly wonderful Innes book. In fact, that and OPERATION PAX were so good (read them one into the other) my brain is till humming. But I'm only going to review the one this time out. Tossed a coin.

Note: It's no secret that I will love any book set in or near Oxford especially if they are as exciting and well written as this one.

More a thriller than a mystery, OPERATION PAX is another in the decidedly loony adventures into which Michael Innes was so fond of tossing his Scotland Yard Inspector, John Appleby. The occasionally too sedate Appleby began life at Scotland Yard and somehow along the way, became landed gentry, an unofficial 'spy' and a dogged suppressor of bad guys bent on world domination, all rolled into one. How he manages to remain so calm is beyond me. Extreme and willing suspension of disbelief is needed if you're to go along with these plots and accept as rational all manner of absurdity. Luckily, I have more than enough willing suspension for all of us.

The story begins in a rather unpromising sort of way, we're at a bank alongside a weaselly con-man and thief named Routh, who, when we first meet him is in the midst of trying to profit from his latest small time con. A coward and a sneak, Routh quickly finds himself on the run in the English countryside where he is soon caught up in the sinister activities of the inhabitants of a manor house in Milton Porcorum, another of those oddly named places the English are so enamored of.

Routh on the lamb is never for one moment allowed to become sympathetic (although I kind of wish he had been) but he is, nevertheless, the unlikely magnet which draws the various ingredients together in this, yet another Innes plot of world domination.

In OPERATION PAX we will meet Jane Appleby, Inspector Appleby's college-age sister who is up at Oxford, engaged to be married and becoming concerned when her fiance goes missing. Later, the most thrilling part of the story is very nicely turned over to Jane when she jumps deep into the fray with a heroically inclined cab-driver named Roger Remnant (who first tells her he is a twin named 'Enery) at her side, to hunt down a nest of culprits who, earlier, may or may not have kidnapped her fiance.

Just short of Witney, it occurred to Jane that the young man styling himself 'Enery might eventually find her behaviour odd. She had very little to go upon. Indeed, all she could do was to poke about Milton Porcorum inquiring for an ambulance. And that must be a proceeding that would strike anyone as a little out of the way. She had better, therefore, do some explaining. On the other hand it would not do to explain too much. It she announced that it was her aim to track down and interview a number of men who had just carried out a highly criminal abduction, he might suppose her to be mad or at least unwomanly. He would probably suggest applying to the police.

But she had done that - she was sure in the most effective way possible - by sending John the telegram; and now it was a point of honour to push straight in herself. If the ambulance led to Geoffrey [Jane's fiance] , and to piercing the dark veil that had made a nightmare of her life week after week for what seemed an eternity, she must follow it at any hazard whatsoever, and with all the speed that a hired car could muster.

Jane determined to reopen communications. She therefore leant across the front seat. "May I explain a little?" she asked.

"Does a romantic secret cloud your birth too?"

Jane ignored this. "What I'm looking for," she said, "is an ambulance."

"Isn't that a trifle pessimistic? I'm quite a careful driver - although you are making me go at a fair lick."

"It's impossible to talk to you."

"Not a bit. I'm attending. And I'll find you an ambulance if I possibly can. Any particular sort?"

"I want to trace an ambulance. It left Oxford - Radcliffe Square, to be exact - at eleven o'clock, and I think it's going to this Milton Porcorum, or to somewhere near there. There is somebody in it that I want to keep in contact with. Only I wasn't told just where it's bound for."

The young man received this in silence. But he had the air of giving the matter a good deal of thought. When he did speak, it was with appearance of irrelevance. "My name is not 'Enery."

"I didn't think that it was for a moment."

This is the kind of writing that speaks volumes to me and which will keep me reading ad infinitum. Why? Because I love this sort of adventure and these sorts of people. Have done so since I was a kid.

The last part of the book which mostly takes place in the vaulted underground beneath Oxford's Bodleian Library is mysterious, atmospheric, thrilling, spooky and a library lover's delight.

Look, OPERATION PAX is a book filled with surprises galore, a very major red herring, a group of clever, sinister and seemingly omniscient bad guys, a remote estate in the middle of nowhere, lions (yes, lions, well, one lion) and tigers, a bunch of obstreperous school boys and girls on bikes who arrive just in the nick of time, a man inside a cat, bizarre experiments, and as if that weren't enough, there's a mysterious formula copied on a slip of paper by the aforementioned Routh, which must be found at all costs. You've heard the expression, 'villains who will stop at nothing' - well, this is a prime example. If that's not enough to tempt you, then there's no hope for you at all. Ha!

When Innes was writing this type of book, all bets were certainly off and anything was possible. Thank goodness.

And finally, since it's Friday, don't forget to check in at author Patricia Abbott's blog, Pattinase, to see what other Forgotten or Overlooked books other bloggers are talking about today.