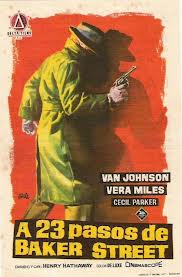 The Spanish poster for 23 PACES TO BAKER STREET - Of all the film's posters online, this is the one I liked best. So A 23 PASOS DE BAKER STREET it is.

The last time I watched this film it was years ago on late night television, prior to that I'd seen it in the theater with friends. Admittedly, this is the sort of film that does very well in a theater setting, less so on TV and even less so on my computer screen. But there's no denying it has its moments, primarily because of its foggy London-town atmospherics.

My main problem is that Van Johnson is so caustic in the lead role that you can't for one moment imagine anyone having tender feelings for him (Johnson almost always had this screen persona which is what, in my view, kept him from reaching the very top tier of leading men during the heyday of ). But the film still works on other levels, still engaging and still drawing you into the vile mystery at its heart: the worst sort of crime, the kidnapping of a child.

23 PACES TO BAKER STREET is a 1956 film directed by Henry Hathaway with a screenplay by Nigel Balchin based on a Philip MacDonald's suspense novel. (MacDonald of THE LIST OF ADRIAN MESSENGER writing fame.) The stars are Van Johnson, Vera Miles and the always appealing Cecil Parker. It's shot in the color of the day which tends to look grubby in hindsight and you might as well forget about the outside night scenes - black and nearly impenetrable. 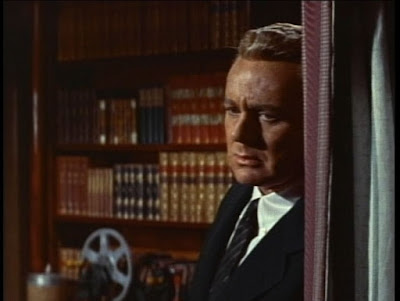 At any rate, Phillip Hannon (Van Johnson) is a successful American playwright living in London. For reasons unknown to us, he has lost his eyesight and as the film opens, he is a blind, bitter and resentful man. Not a lot of laughs is our Philip. He does, however, have an associate, Bob Matthews (Cecil Parker) who (for reasons equally unexplained) remains at his side to run errands, transcribe Hannon's work and handle whatever else needs handling.

Having left behind a broken engagement to his one time secretary, Jean Lennox (Vera Miles), Hannon is surprised one evening when she shows up in London on a holiday. Though she nervously behaves as if she's stepping on eggshells when dealing with the playwright, it's not hard to tell that she's still in love with him. (The question is: why?) Well, it's equally obvious that Hannon wants nothing to do with her in any romantic way and he basically dismisses her visit and thanks for stopping by - that sort of thing. Very ungentlemanly. But you're supposed to understand that he's only behaving this way for her own good. Right.

That same night he makes his way to a local pub to have a drink. While there he overhears a sinister sounding conversation. (And may I chime in with a word for the delightful Estelle Winwood who plays the barkeep at the pub. She's wonderful as always.)

Alarmed by what he overhears, Hannon goes to the police with his story and naturally enough they have a hard time believing what he believes  - that some sort of crime is being planned. But since Hannon is a famous playwright, they humor him and do make some desultory inquires which lead nowhere. 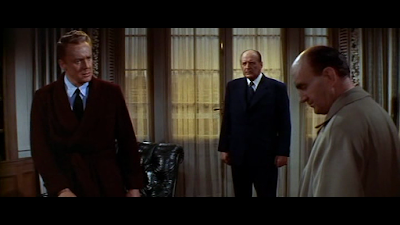 But Hannon - from memory - has recorded the conversation he overheard at the pub, on his large taping apparatus (which he uses to create his plays). "Dialogue is my business," he says, rightly enough and he broods over the thing until he comes up with a couple of ideas that may or may not put him and his friends in peril. You see he'd overheard a couple of names and a date and knows that time is of the essence.

Putting his friends in peril doesn't seem to bother Hannon much and the fact that his blindness might put him in physical danger doesn't seem to occur to him. It's full speed ahead most especially when he figures out that what he overheard has something to do with the possible kidnapping of a child. Then, of course, we say go right ahead and get yourself killed - the saving of a child is worth any risk. (Though one wonders why Hannon doesn't just hire a private detective to do his running around - but why quibble.) Very quickly, Hannon and Bob (Cecil Parker) and Jean (Vera Miles) team up to figure out the who and the what of the nasty  plot, Jean, grateful, that Hannon is showing an interest in life. But soon after that, Hannon stupidly finds himself in deadly peril of his own making but is rescued by Bob and the cops. And that very night, Scotland Yard shows up to discuss the murder of the young woman whom Hannon had initially overheard speaking in the bar. But clues are few and far between and the Yard hardly knows where to begin their investigation though Hannon tells them that whatever is going to happen is going to happen the next day.

This is a good film that could have been even better, but maybe I'm being picky. We do get a proper hair-raising encounter in the and a surprise which is no real surprise to those of us who have been reading and viewing mysteries since the dawn of time, though the effect is still good.

Actually this is the sort of film that passes muster on a cold winter night when one is comfortably ensconced before the television with a hot cup of tea and a scone or two. Though I watched it again on a hot summer night with a glass of white wine. Good enough.

Just a thought: This would probably lend itself to a rather good remake starring, oh, say, Colin Firth.
Then again, what film wouldn't benefit by the inclusion of Colin Firth - thinking out loud here.

And since it's Tuesday, don't forget to check in at Todd Mason's blog, Sweet Freedom, to see what other forgotten or overlooked films, television or other audio-visuals other bloggers are talking about today.