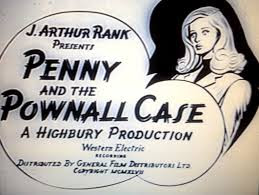 Though it may not look it, this fast-moving little film is an early J. Arthur Rank production. It tells the story of a ditzy model named Penny Justin (Peggy Evans) who poses for an artist named Jonathan Blair (a very young Christopher Lee) who in turn works for - I suppose - a newspaper syndicate who publishes a comic strip about the adventures of a girl named Penny. Confusing I know, but it's how things were supposedly done in the old days. I mean, live models posed for the artists who drew for the comics. (Remember the Martin and Lewis musical, ARTISTS AND MODELS? Sort of like that but with no singing, no Shirley MacLaine and no yucks.) 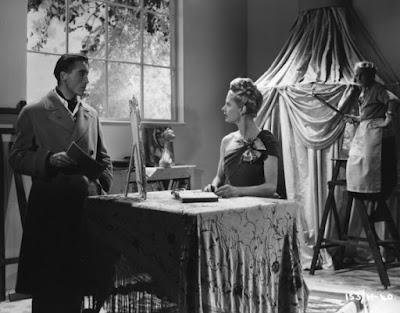 PENNY AND THE POWNALL CASE is a 1948 film directed by Slim Hand (that's what it says here), with a screenplay by W.E. Fairchild based on his original story. The film's cast includes a very young Diana Dors (in dark, unflattering hairdos) as Penny's roommate Molly who also happens to be private secretary to Scotland Yard Inspector Michael Carson (Ralph Michael). 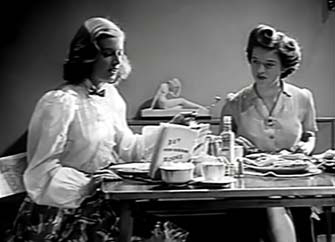 Penny is annoyingly enamored of dashing detective stories. She dreams of mystery and adventure and of playing heroine in a real-life detecting case when lo and behold one drops directly into her lap. A spy named Pownall has been killed while attempting to deliver secret information regarding Nazi war criminals still on the run. These Nazis are attempting to escape retribution using the ports of Calais, France and a port city in Spain. (Not sure of the geographical connection, but this is what I surmise.) 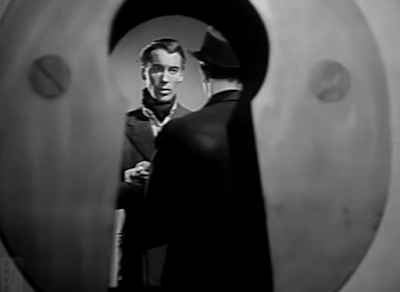 Anyway, it conveniently turns out that the comic strip Blair and Penny work on is somehow being used to give the war criminals necessary information on dates and such. Penny spies on her boss and sees something suspicious which she then decides to tell her friend Molly who works at Scotland Yard but has zero interest in playing detective. 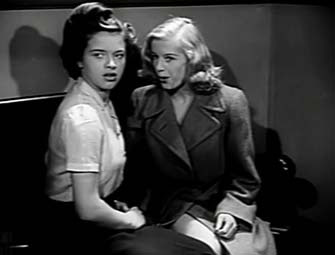 When her artist boss tells Penny they must go to Spain as part of their work (I know - huh?)  and they will be travelling together, Penny at first demurs but then when she decides her boss is an agent she resolves to go along and do some sleuthing on her own. 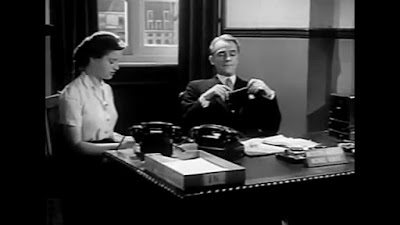 At the same time, Molly's boss, the Scotland Yard Inspector finds out that Spain needs looking into and decides to go sleuthing. Might as well, the previous agents having all been done in by the bad guys.

Once in Spain, Penny and the Inspector will run into each other (actually, she saves his life) and soon enough, Penny is making her dream come true: she is working on a REAL spy case with Scotland Yard!

This is an enjoyable little film less than an hour long, about the length of a television episode - so there's little time investment. For me, the most interesting aspects of the 45 or so minutes are these: 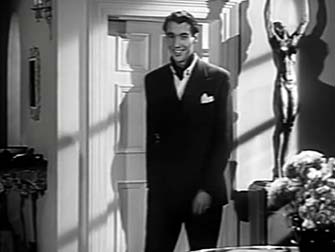 1) Seeing the young Christopher Lee playing his first villain. (I'm not telling you anything you won't figure out almost immediately.) From little acorns mighty oaks will grow.

3) Watching, in stupified awe, the most godawful dress designs ever created for a movie heroine in the history of the cinema. In one scene, Penny wears a heart-shaped bonnet (yes, a bonnet) and a frock with two heart shaped pockets. This hilarious outfit has to be seen to be believed. (In truth it's like a cartoon get-up, something Minnie Mouse might have worn) I think it's probably worthwhile to see the film just for this AND the hat Penny wears near the end with a feather about a yard long sticking straight up. Oh my goodness. Poor Penny, she may be a fine, if clutzy, detective, but her taste in clothing needs so much refining I wouldn't even know where to begin.

And since it's Tuesday, don't forget to check in at Todd Mason's blog, Sweet Freedom, to see what other films, television, and other audio/visuals other bloggers may be talking about today.
Posted by Yvette at 12:30 AM