Tuesday Forgotten (or Overlooked) Film Turned On Its Head - Sort Of. And A Quiz - Sort of. 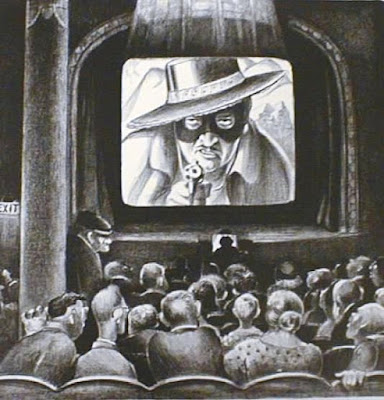 And now for something a little different:

Off the top of my head (no looking things up), I've listed a few viscerally unforgettable moments from movies of the past. Things I'll never forget (even burdened with old lady memory).

When you finish reading my faves, I expect you to name a few of yours (that's kind of the quizzy part) off the top of your head(s) and no fair looking things up.

Listed in the order I thought of them, (more or less) and separated by color to make them easier to read:

The lit match cut to the heat of the desert in LAWRENCE OF ARABIA. One of the great examples of the film editor's art.

The approach from a far off distance of Omar Sharif on camel-back from LAWRENCE OF
ARABIA.

The very first glimpse of C3PO in the first chaotic scenes on board the enemy ship in STAR WARS. I was thunderstruck.

Fred Astaire and Ginger Rogers dancing Cheek to Cheek in TOP HAT, where his dancing is tantamount to making love to her.

'What are the 39 steps?' question shouted by Hannaday from the music hall audience near the end of THE 39 STEPS

Woman with knife in back stumbles out of the kitchen into Richard Hannay's arms near the beginning of THE 39 STEPS.

The heart pounding opening credits of one of the more underrated westerns, THE BIG COUNTRY.

The thunderous approach to the canyon of Charles Bickford's riders in THE BIG COUNTRY.

'Generosity! That was my first mistake.' Eli Wallach as the Mexican bandit responds as the seven gunfighters pop out of the woodwork in THE MAGNIFICENT SEVEN.

The scene where La Bete (the Beast) laps water out of Beauty's cupped hands in LA BELLE ET LA BETE.

The scene where the Beast carries Beauty into her bedroom and as they move into the room, her clothes change magically in LA BELLE ET LA BETE.

The glove, and the mystical white horse in LA BELLE ET LA BETE.

The scene where Beauty walks through the long tiled hall of the castle and the candelabras are arms holding candles which sway as she glides by in LA BELLE ET LA BETE.

The end of A NEW LEAF where Walter Matthau is resigned to his fate.

The scene in LAURA where Gene Tierney (Laura) walks through the door and catches Dana (the gloomy cop) Andrews off guard.

The scene at the museum with the fragile dinosaur skeleton near the very end of BRINGING UP BABY.

The Manhattan lightning storm at the beginning of THE GHOST BREAKERS.

The erotically charged close up of Jean Simmons lying on the beach after she's escaped from the yacht (she'd been kidnapped) in THE BLUE LAGOON.

The extraordinary opening sequence by, I think, Saul Bass to a very bad film, WALK ON THE WILD SIDE. Ignore the film, but watch the opening credits.

The scissor scene where Grace Kelly kills the man trying to kill her in DIAL M FOR MURDER.

"Is this England?" asks Mel Brooks (dressed as Hitler) at the very, very end of his imperfect interpretation of the Jack Benny classic, TO BE OR NOT TO BE.

How many of these moments do you remember?

Here's the chance to name some of your own favorites. Don't be bashful. We're all movie mavens here.

In addition, here are more moments that I remembered afterwards and banged my head for not remembering them the first time around:

The shipwreck in THE BLACK STALLION, the horse jumping over the railing.

The horse's hooves as they swim underwater for the first time in THE BLACK STALLION.

The horse gingerly approaches the boy on the desert island and takes the food offered him in THE BLACK STALLION.

The boy wakes to find a cobra about to strike - the horse appears out of nowhere and pounds the snake into the sand in THE BLACK STALLION.

The helicopter shot of the boy riding the horse for the first time in THE BLACK STALLION.

Later, in the credits, the boy and horse rolling in the sand in THE BLACK STALLION.

The opera scene in THE SHAWSHANK REDEMPTION.

The scene in BAMBI when the frantic doe tells her boy, "Run. Run and don't look back!"

The nude swimming sequence in TARZAN AND HIS MATE.

In ET, the magical moment when the kids on bikes fly away as they're about to be cornered by government agents.

Since it's Tuesday, don't forget to check in at Todd Mason's blog, Sweet Freedom, to see what forgotten (or overlooked) Films, Television or Other Audio/Visuals other bloggers are talking about today.
Posted by Yvette at 12:30 AM