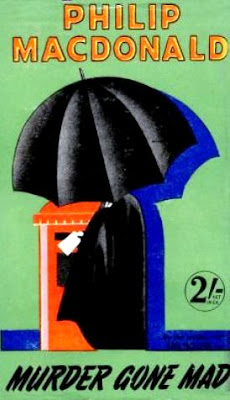 I suppose Philip MacDonald is best known as the author of THE LIST OF ADRIAN MESSENGER - an Anthony Gethryn book - which was turned into a rather strange 1963 Make-up Fest movie joke by John Huston, a joke that didn't work. The only things that saved the film (at least for me) were the basic plot (one of the most ingenuous of all time), the actors George C. Scott, Jacques Roux, Herbert Marshall, Clive Brook AND a terrific ending. In fact, the movie has a much better ending than the book. MacDonald's endings always seemed to need work.

MURDER GONE MAD as another example, a very odd book in one major respect: the murderer is really, REALLY mad but no reason for the madness is given by the author. Now, normally, I wouldn't mind that so much if only I got a hint of the sort of mania plaguing the killer (not that I want a whole chapter devoted to the killer's thoughts - no, I hate that) but a hint here and there seems, to me, a bit necessary for this sort of thing.

Killer mania in and of itself - existing in a vacuum so to speak - is just not that interesting. So the ending of MURDER GONE MAD is a bit deflating, even if the choice of killer is surprising. (Mystery experts among us might begin to figure it out about three quarters of the way in.) I mean, why was this person driven to kill? Give us a hint. (Or maybe MacDonald did and I missed it?)

Still, I'm recommending this book for those who enjoy a real, rip-roaring, can't put it down, old fashioned serial killer rampage set in an English country town. Warning, though, the first murder is very hard to take and I wonder at MacDonald's beginning the book this way, but if you skim it, you'll be all right - the rest of the book is terrific. It all depends on what you read these books for. They're not meant to be real life after all - that's what I tell myself. Hard as it may be to believe, I read vintage mysteries for relaxation. Yeah, strange, I know. But I think it's all about the bad guy getting it in the end. I'm not, lately, in the mood for ambivalence.

What makes MURDER GONE MAD eminently readable - at least to me - is the frenzied hunt for the killer. Philip MacDonald was a master at creating mass hysteria, nasty murderers and police turmoil.

In MURDER GONE MAD, we have a killer sending taunting letters (significantly signed, 'the butcher') to the newspaper, and a bunch of local cops unable to get a handle on things as the murders mount. Superintendent Arnold Pike of the Criminal Investigation Department - a guy with an obvious rep - is taken off another job and sent to the village of Holmdale, in order to catch a clever killer and most importantly, stop 'questions from being asked in the House'.

"...If only these country police would ask us in at once instead of waiting until they've made a mess of everything, life might be easier."

Pike nodded. "By jing, sir," he said, "I echo that wish!" He turned to the door; then checked. "By the way, sir," he said, 'heard anything of Colonel Gethryn [Anthony Gethryn] How he is, I mean, sir?"

Lucas grinned and shook his head. "No. Beyond the fact that he's going to be in bed for another three weeks with that leg, nothing." He smiled at Pike with some slyness. "Why? Want help already?"

Pike laughed. "I'm not proud, sir, you know. I was just wondering whether, if he wasn't doing anything, he might like to come down."

"Well, he can't," said Lucas and laughed again. "And, anyhow, it's not his line, and you know it. This isn't a job for a man so much as a job for an organization. When you can't find a motive - in fact, where there isn't a motive, you're dealing with some form or other of lust-killing; and to pick a lust-killer - who may be, on the surface, a most ordinary, respectable citizen - out of a crowd of six thousand citizens isn't a job which can be done by deduction. It's got to be done by massed police work, cleverly directed..."

So Pike is sent to 'cleverly direct' and we know it's not going to be an Anthony Gethryn book.

But all in all, despite the ending, MURDER GONE MAD is worth tracking down. (Abe Books has some very cheap copies with free delivery.)

An aside: MacDonald wrote at least one other serial killer book (also read recently by yours truly) called, MYSTERY OF THE DEAD POLICE which is almost as good (despite needing major editing and tightening). But the difference is that in this book, we do learn the killer's motivation through several chapters written from his point of view. Yeah, yeah, I said I hated that - but I hung in there with this one (the chapters aren't that long or involved). You all know how contrary I can be.

I will definitely be hunting down more Philip MacDonald books even if I didn't like the first Anthony Gethryn, THE RASP and didn't think much of THE RYNOX MURDER, (mainly because I figured out the big surprise early). Thankfully, MacDonald wrote a lot of books.

Friday Forgotten (or Overlooked) Book is a weekly meme hosted by author Patricia Abbott at her blog, Pattinase. Don't forget to check in and see what other forgotten or overlooked books other bloggers are talking about today.
Posted by Yvette at 12:30 AM