Friday (Not so) Forgotten (or Overlooked) Book: DOWN AMONG THE DEAD MEN by Peter Lovesey 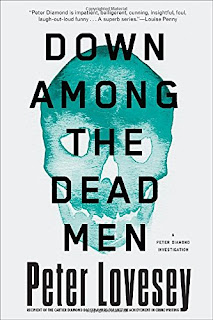 Not really forgotten or overlooked since this is Lovesey's latest in the popular Peter Diamond series set in Bath, England, but what the heck. I did have a couple of other books lined up but then I saw that John (at Pretty Sinister Books) had already beaten me to the punch. So I got into a snit and decided to review the Diamond book since it was still lingering in my mind and you know how rare an occurrence that can be.

I've been reading Peter Lovesey's Chief Inspector Peter Diamond books for several years and while they can be either hit or miss, I'm glad to say that I enjoyed this latest one very much. Nothing can beat THE HOUSESITTER which I think is Lovesey's best Diamond book so far (of the ones I've read, that is) - a classic in police procedural detection - but I keep hoping he'll come up with something as good or better one of these days. So far - no dice. But still I liked this latest effort. (My second favorite, since you must be wondering, is THE VAULT.)

The last few Diamond books have been so/so in my opinion, though others have liked them more than I. What can I say? I'm either hard to please or maybe I don't know what I'm talking about. Take your pick.

In DOWN AMONG THE DEAD MEN, we finally have Lovesey getting back to form or at least, the form that I like.

Here, a very reluctant Peter Diamond is forced to take a trip out of Bath alongside his boss, Assistant Chief Constable Georgina Dallymore. The officious Dallymore is very hard to take and nowhere in any of the books does she actually come alive as a real person. Hard to tell why, but there it is. Still she's in the story more as a prop for Diamond to play against and for that, she's fine.

The two are on their way to check up on a fellow cop who's been relieved of duty because of some sort of bad show. Unfortunately, the cop is Hen Mallin, a detective whom Diamond admires and has worked with in the past. (Actually there is a Hen Mallin series begun by Peter Lovesey which is about three books along - I have one waiting for me at the library as we speak.)

At any rate, we suspect going in that all is not how it seems, but we wait to find out how Diamond is going to get to the bottom of a case (while partially keeping his boss in the dark) that begins as alleged police misconduct but spreads outward to include an egregious multitude of missing persons, several murders, a man wrongly convicted, a bunch of eccentric artists, a girls' school, a guy who specializes in an ingenious method of disposing of bodies and my only quibble (a very minor one) is that in the end the guilty person confesses all in a most unlikely way.

When it comes to modern day police procedurals, Peter Diamond is an acquired taste; I like that he operates out of Bath (mostly) and the clever cases contrived by Lovesey are usually pretty hard nuts to crack. However, Diamond lacks charm and can be off-putting. He is a widower with a gruff persona (and little sense of humor) who shines at police investigation especially when he's rubbing his superiors the wrong way. Sound familiar?

For charm I'd go to inspector Bill Slider in the London police procedural books written by Cynthia Harrod-Eagles. Very similar type series but set in London and Slider has a quiet charm so lacking in Diamond. But in truth, they're both good series if you like this type of thing, and I do.

Since it's Friday, don't forget to check in at author Patricia Abbott's blog, Pattinase, to see what forgotten or overlooked books other bloggers are talking about today.