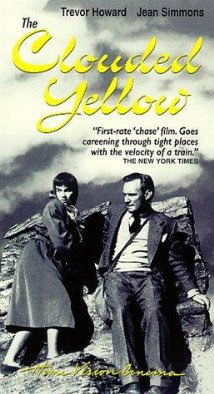 THE CLOUDED YELLOW is directed by Ralph Thomas from a screenplay and story by Janet Green with cinematography by the brilliant Geoffrey Unsworth. I've only just recently learned that it is available on youtube, but I'd remembered the film from having watched it MANY years ago, once upon a time when terrific films like this were regular fare on my local television channels. 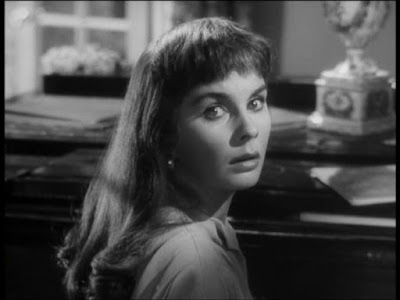 This is a dark little British thriller featuring the radiantly beautiful Jean Simmons, who plays Sophie Malraux, a young woman at the center of an oddly uneasy household. Into that household comes Trevor Howard as Maj. David Somers, a recently cashiered secret service agent improbably hired to catalog butterflies. (Hence, the film's title.) The setting is a secluded country estate in Hampshire belonging to Nicholas Fenton (Barry Jones) a middle-aged gentleman fond of collecting butterflies. He lives there with his wife Jess - they are Sophie's guardians.

Jess Fenton (Sonia Dresdel) is younger than her husband and rather tightly wound. She has an eye (and more) for Hick, the local handyman (and poacher) whom we are given to understand all the ladies in the area find very attractive. Though why that should be one can't imagine since he is played in a very sleazeball manner by Maxwell Reed. He makes himself especially obnoxious drooling over Sophie.

At any rate, when Hick is found stabbed to death, the police fasten on Sophie as the most likely murderer when they find blood on her coat and she has trouble explaining what she was doing walking on the grounds at 3 a.m. in the morning. You see, the poor troubled girl has memory lapses. All along we've been told that Sophie tends to get '...things muddled' and what's more, she takes after her unfortunate father who murdered her mother and then killed himself. Uh-oh. 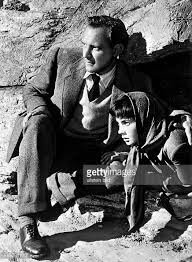 David, not for a minute believing Sophie capable of murder, convinces her to flee with him. The two take off in the night for parts unknown with the police hot on their trail. Thus we are in for a treat as the pair head first to London, then Newcastle where friends (from the old days of David's secret service work) lend a hand, then off to England's beautiful Lake District (and boy do I wish this film had been in color) - all the while stalked by secret service agent (Kenneth More) as well as Scotland Yard.

An all out manhunt like this seems a bit over-the-top to me, viewing this film so many years later. In view of the fuss (and overtime pay to the coppers), one would think that there'd been a murder spree or at the very least, stolen national secrets, but let's not forget that this is England and they do things differently there.

Finally, Sophie and David make their way to Liverpool as Sophie's memory returns and there's a real culprit to catch which leads to a very thrilling ending on the Liverpool docks.

THE CLOUDED YELLOW is another one of those 'small' films, perfect to wile away the time as summer comes to an end and we head towards the baseball playoffs. After all, one can't watch baseball all the time. 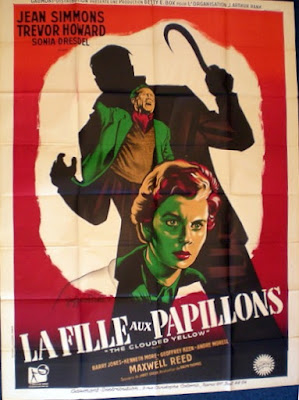 The French film poster which is much more exiting than the British one or, for that matter, the American one.

And since it's Tuesday, don't forget to check in later today over at Todd Mason's blog, Sweet Freedom, to see what other forgotten or overlooked films, television or other audio/visuals other bloggers are talking about today.


Here's the movie (incorrectly titled TRIO) on youtube for as long as it lasts: