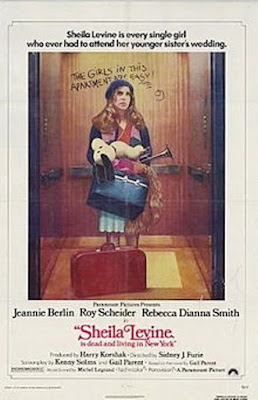 The book by Gail Parent was one of my favorite reads many, MANY years ago even if it was then what is now known as 'chick-lit'. I've always had a warm spot for SHEILA LEVINE IS DEAD AND LIVING IN NEW YORK (great title) even if I couldn't actually remember much about it except a vague good feeling. You get to a certain age and your memory refuses to conjure up much, but it does conjure up feelings.

My blogging friend Sergio is working on a review of the book even as we speak, so there's that to look forward to. Can't wait to see what he makes of it.

But in the meantime, let's talk about the film which was adapted by Kenny Solms from Gail Parent's book. Even if the darker humor and overall suicide motif didn't make the cut to the big screen, there is still some nostalgic humor to be had (and one or two laugh out loud moments) though, in truth, most of the film feels as if it can't quite decide what it wants to be. A shame, really, because the source material was pretty damn rich.

SHEILA LEVINE IS DEAD AND LIVING IN NEW YORK is the familiar (and often told) story of a young, insecure, unmarried woman gone to the Big City to make her fortune and more importantly find a hubby. It was a book for a certain time and a certain age. Hubby-hunting is not, one would like to think, such an active sport as it once was - correct me if I'm wrong.

It was 1975 after all. Lots of good movies from the 70's even if we wish now that the film color, set design and fashions had been different. Looking backwards, society was not very aesthetically pleasing then. (And don't get me started on the ugly furniture.) Garbage strikes in the city were not uncommon and there was a lot of vulgar polyester going on. Though surprisingly, Roy Scheider still manages to look pretty good in his duds, especially in one scene sporting a white suit.

The screenplay too is burdened by signs of the times and a plot which is herky-jerky, giving the film an episodic look. Of course, with a film, it could just be that the editing needed more work.

At any rate, I watched SHEILA LEVINE IS DEAD AND LIVING IN NEW YORK last night (it is available for viewing for $2.99 at google plus and, unknown to me until I found out today, available for free on youtube even if, probably, very temporarily) and was reminded how Jeannie Berlin's face was/is capable of enormous emotion while not doing much emoting at all. A lot of the film, directed by Sidney R. Furie, is done in close-up (probably because of the aesthetic ugliness I mentioned earlier) so we're treated to nice big views of Berlin's melancholy persona as well as nice big views of craggy faced Roy Scheider who, for reasons unknown, could take a good close-up despite his boxer face (same as George C. Scott though one might have thought otherwise - the camera does love an interesting face).

And before we go any further, let me add that Jeannie Berlin is the daughter of Elaine May whose brilliance needs no exaggeration. May starred in and directed one of the best romantic comedies of all time, A NEW LEAF (with Walter Matthau), a film I never tire of recommending.

Back to the movie:

Roy Scheider seems a bit miscast as Sam Stoneman, the male lead - in the role he manages somehow to look too intelligent to be who he is even as he's playing a doctor with a roving eye and a raging libido. But as I mentioned, he's good to look at and is such a fine actor that we go along with him even when it's obvious he doesn't belong there. And even, more importantly, when he isn't especially likable.

Jeannie Berlin plays Sheila Levine, a clumsy. strangely likable Jewish-American woman who is drowning in Harrisburg, Pennsylvania and has come to the big city to breathe a bit of freedom while trying to fashion some sort of career and (as mentioned before) find a hubby. She is at that humbling stage in life where the marriage of a younger sister is cause for humiliation.

Despite her mother's protestations, Sheila takes up residence in a dark, cramped, ramshackle apartment (termed a 'penthouse' because it's on the top floor) as roommate to skinny Kate (Rebecca Dianna Smith), a free spirit who says she's an 'actress' and therefore, doesn't eat. In fact, Kate is a self-centered, self-described 'hustler' who sleeps around and leads the sort of New York City life that we were all warned about.

I don't understand why a prettier actress was not given the role of Kate or at least, someone who had a better look. A blond would have been good as visual contrast. But maybe I'm quibbling. In the book, Sheila is supposed to be overweight, but in the film she isn't. She is just a different body type than Kate, though in looks they are not that far apart and Jeannie Berlin is actually more attractive which isn't supposed to be the case.

Anyway, Sheila gets a job as a typist/singer/office clerk at a Manhattan company that produces records for children.

At a club, she meets a brooding and slightly sloshed Jewish doctor, Dr. Sam Stoneman (Roy Scheider), a guy on the make, who is taken with Sheila's awkward mumbling. He talks her up to his apartment and later that night, poor Sheila thinks she's found true love.

Most of the film didn't ring many bells, memory-wise, though some of it did. I liked seeing Jeannie Berlin who has a kind of  klutzy, sleeping princess look which works very well in this and I enjoyed watching Roy Scheider trying to worm out of an untenable situation and remain a hero. Doubly difficult once he begins sleeping with Sheila's roommate, Kate.

SHEILA LEVINE IS DEAD AND LIVING IN NEW YORK is a movie that had been hanging around at the edges of my mind for years and if it wasn't as good as I'd imagined, I'm still glad I got a chance to revisit.

Since it's Tuesday once again, don't forget to check in later at Todd Mason's blog, Sweet Freedom, to see what other forgotten films, television or other audio/visuals other bloggers are talking about today.