Friday Forgotten (or Overlooked) Book: PASTIME by Robert B. Parker - A Spenser book. 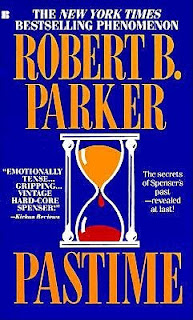 As I was clearing out my paperback bookshelves and discovering books I hadn't read in a while, I ran across PASTIME and promptly dropped everything for a reread. I'm happy to say it is still just as good as the two or three previous times I'd read it.

This is the book that introduces us to Pearl the wonder dog, a German Short-Haired pointer new in Spenser's life. It is the sequel (sort of) to my favorite book in the series, EARLY AUTUMN, the book which introduced us to Paul Giacomin, Spenser's (sort of) son. Don't know what else to call the boy since 'son' is the part he was fashioned to play. Paul is not related to the Boston private eye and was already a teenager when he debuted in Spenser's life many books ago.

Though PASTIME has more of Susan (Spenser's psychiatrist girlfriend) than I would like - as some of you know, I can't stand the character and it shows how much I love Spenser that I still read the books DESPITE she who makes my flesh crawl -  this is still one of my all time favorite thrillers. And it isn't necessary to have read EARLY AUTUMN, though it doesn't hurt.

At any rate, here are the basics:

The adult Paul Giacomin is an interpretive dancer in NYC and on the verge of getting married; he shows up on Spenser's doorstep in Boston, worried about his mother Patty. Though they aren't very close, Paul still likes to keep in touch with mom. But now she seems to have disappeared from her life and Paul wants Spenser to help find her. The young man is in a mood to touch base with his past.

Patty Giacomin is the sort of needy woman who can't make a move without a man beside her, so almost immediately Spenser finds that Patty has a new boyfriend. He is Richard Beaumont, a ruggedly handsome, small time hood working for Gerry Broz. Uh-oh.

Gerry Broz is a psycho (no way to sugar coat it) and the only son of Joe Broz, elderly head of the Boston mob. A killer with little self-control, Gerry is not good man to cross. Now Beaumont is on the run (with Patty in tow) after having skimmed more than a million bucks from an ill-advised criminal enterprise. Not very smart, but then Beaumont is not exactly a mental wizard. He is necessarily the sort of loser that Patty Giacomin always seems to attract. So no big surprise there for either Spenser or Paul.

PASTIME evolves in the Parker conversational tone we love and look forward to, in conversations about family relationships, the past, (we learn quite a lot about Spenser's heretofore unknown childhood in Wyoming), about love and dependency, weakness and strength and honor. Of course, this being a tough guy thriller, there's tough talk, menacing behavior and Hawk, whose spiel, sad to say, is becoming (for me at least) a little wearisome. But still, he is necessary in this book.

We also meet up with Vinnie the hitman, second in command to mob boss Joe Broz, both of whom have an accepted if uneasy relationship with Spenser and Hawk based on indefinable codes which make sense only to them. Vinnie is a killer whose loyalty and word of honor can be trusted if you can believe that and I do. In this book, he will make a life altering decision, so look for that as well.

There are two incongruities in the plot which you might not notice unless you've read the book more than once as I have, but they don't/didn't obstruct my enjoyment.

Then there are the thrilling scenes near the end when a wounded Spenser and gun-shy Pearl are forced to take to the woods with Gerry Broz and an assortment of hoods in pursuit. You know how I am about plot details, I usually forget them as soon as I've finished a book. But not this time.

Despite Susan, PASTIME is a special book featuring a private eye many of us have grown up with or discovered late (as I did) written by one of those writers whom we wish could have lived forever. (But there are really many, many books in the series, so if you haven't read any Spenser, there are plenty of good times still waiting for you.) And, as it turns out, Spenser lives on in the hands of another remarkable writer, Ace Atkins, who has taken over the reins from the late Robert Parker and is doing an excellent job. I don't normally like this sort of thing, but Ace is truly worthy of the trust placed in him by the Parker family.

Link here to a complete list of Robert Parker's books.

Friday is Forgotten (or Overlooked) Books day over at author Patricia Abbott's blog, Pattinase . So don't forget to check in and see what other forgotten or overlooked books other writers are talking about today.