Forgotten (or Overlooked) Books: DROPPED NAMES (2012) Famous Men and Women as I Knew Them by Frank Langella 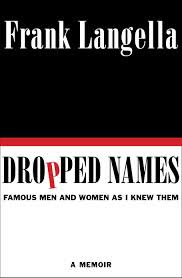 The actor Frank Langella (I always remember him from Mel Brooks' long lost classic, TWELVE CHAIRS though perhaps he's more well known for playing Nixon and Dracula - not at the same time) turns out to be a pretty terrific writer of memoirs - if DROPPED NAMES is anything to go by. Reveling in his own star-studded history and memorable encounters with the very talented and the very celebrated and occasionally with those of near mythic status, Langella coyly reveals almost all and leaves us wanting just that little bit more. Not only is the book full of engaging encounters between Langella and a whole host of entertainment lovelies, but the book is well designed - each person profiled in his or her own essay, the sort of thing that makes reading this sort of thing easy and fun and perfect for the beach.

I think Langella understands what readers of this type of book are looking for. It's not rocket science.

And yet, there's nothing to sneer at in such a perceptive, well-written and occasionally wicked memoir of past times and beautiful people who captured our imaginations, our admiration and from time to time broke our hearts. Langella shares his opinion of a whole slew of stars and celebrities he interacted with and observed over the many years of his career. He doesn't spare us his dislike of Rex Harrison (whose unpleasant reputation was no secret) and Charleston Heston and Yul Brynner's egos also come in for a bashing. Still you don't get the feeling that Langella is out merely to bash, he is not especially mean-spirited or over the top in his observations.

But some rancor is to be expected in books of this sort. Not everyone can love everybody - not everybody is worth loving - and if they did, it wouldn't make for an especially entertaining book. Langella is most kind to the women who flitted in and out of his orbit - as is to be expected of a gentleman.

Overall I get the impression that Frank Langella is comfortable enough in his own skin and basically satisfied with his long-lived career. Plus the older he gets, the more attractive he gets. Nothing wrong with that.

"Langella's book celebrated sluttiness as a worthy - even noble - way of life. There was so much happy sexuality in this book that reading it was like being flirted with for a whole party by the hottest person in the room. It was no wonder Langella was invited everywhere." Ada Calhoun in the New York Times.

I don't know about the sluttiness aspect, but certainly the reader knows almost right off the bat that Langella is having a ball. And yeah, he was usually the hottest guy in the room. I don't mind that ego plays a part in this as it must do in any memoir of this sort. Don't read a memoir (especially from an actor) if you don't want to confront a huge ego. But ego with charm is often a delight, especially if you get the sense that the guy speaking is maybe not such a bad guy and best of all, he is someone with whom the reader wouldn't mind spending time with.

Though on screen Langella often gives the appearance of a deep, dark intensity (the man played Dracula after all), this is not apparent in his writing and isn't missed at all. He very wittily describes (and maybe embellishes) moments with Marilyn Monroe, Rita Hayworth, Robert Mitchum, Elizabeth Taylor, Montgomery Clift, Jackie Kennedy, and others of the glamorous set to whom he was introduced or worked alongside as he established his stage and film career. Not bad for a star struck Italian boy from New Jersey.

It's funny how happenstance and luck can play such an important part in someone's life and career. It was through an early friendship with Bunny Mellon's daughter, while both were at the Cape Playhouse in Massachusetts, that Langella was introduced to the grandiose, outsize life of society and celebrity. From then on there was no stopping him.

The one on the wonderful Billie Burke who seems to have been a total delight - remember her as the Good Witch in THE WIZARD OF OZ and also as Topper's slightly ditzy wife? In fact, she played slightly ditzy almost always and almost always won our hearts. Langella clearly adored her.

And the one on gifted Puerto Rican actor Raul Julia who was most famous, I suppose, for playing Gomez in the THE ADDAMS FAMILY film, though he was a brilliant stage actor as well. There is an element of homo-eroticism in Langella's dealings with Julia (Langella eagerly admits he was 'in love with Raul Julia', but gives the impression that their relationship didn't go beyond the 'bromance' stage). Who knows? At the time Julia was married and a father and had the Latin man's fear of being thought less than a manly man. Langella tantalizes and leaves us wondering.

I recommend DROPPED NAMES if you are the sort of reader who likes their Hollywood/Celebrity memoirs clever, inviting, well-written and chock full of charm. 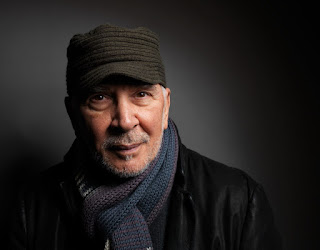 Since it's Friday, we would normally check in at author Patricia Abbott's blog, to see what other Forgotten (or Overlooked) Books other bloggers are talking about today. But since Patti's away, the links this week will be corralled at Evan Lewis' blog, here.
Posted by Yvette at 12:30 AM