Forgotten Book: DOUBLE FOR DEATH (1939) by Rex Stout - Not a Nero Wolfe book. 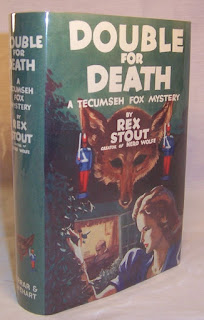 Don't you wish you had this edition? I do. source

I've read (and mostly loved) every single Nero Wolfe book over the years, many of them over and over. There is no mystery writer I revere more. I also loved ALPHABET HICKS, another non-Wolfe book to cross my path a while back and wish Stout had written more featuring Hicks, but alas, there is only one.

Having said that, I'm still not sure what to make of Tecumseh Fox, a character who starred in three books by Stout.

Of course I'd heard of Rex Stout's Tecumseh Fox over the years, but I'd never read any of the books until recently. I got my copy of DOUBLE FOR DEATH in e-book form for $2.49. A great deal. I wish the other two Fox books were as readily available. Though of course, I'd rather have nice hardcovers or yellowing paperbacks with lurid covers. But for inexpensive vintage reading, Kindle is hard to beat. Especially when actual copies of certain books remain too expensive for my budget.

DOUBLE FOR DEATH is a quick read - I finished it in one evening. It's not really comparable to other Wolfe books but then what is? Wolfe and Archie are a classic duo operating within a brilliant environment in a very brilliant series, very hard to equal. So, let's forget the comparison. Try and forget that Tecumseh Fox was created by Rex Stout. Without Stout's imprimatur, the book would probably read better than it is.

Plainly put: While I did enjoy the puzzle of DOUBLE FOR DEATH, the story lacks the kind of cast you want to hang out with. Except for Tecumseh Fox himself, the rest of the characters in the book are easily forgettable and one, at least, is rather annoying - that he's the 'second-in-command' is a major weakness.

(Although I do remember disliking Archie Goodwin - yeah, I know, what was I thinking? - when I first began my lifelong love of the Wolfe books. Yes, I admit it, I'm one of the few who can claim that Wolfe himself is what won me over in the beginning. Of course, now I love Archie equally.)

I don't really know what to make of DOUBLE FOR DEATH since it is so different in tone, in temperament, in style and in pace from you-know-who-and-what.  So the result is this mish-mash review.

Stout himself thought this was his best plotted book ever, so who am I to to quibble with the master? But that's all the book is - a clever plot. It's a 'forest for the trees' type thing - enjoyable, but not memorable. In fact, I'm having trouble now remembering most of it. (I know, I know, you're thinking, 'But Yvette, you NEVER remember what you read'. Yes, I agree, but there are different ways of dis-remembering.)

Tecumseh Fox lives in an enclave - a large house and property (there are cows and horses) - somewhere in, I think, upstate New York. Apparently, Fox is one of those self-made men who can live as he pleases and has no real need to make a living. He shares his house with a bunch of eccentrics, 'guests' who come and go, none of them very interesting. Fox is empathetic, imposing, suave, elegant, brilliant and somewhat eccentric.

"She heard quick light steps, twisted her head again and saw a man carrying perhaps fifteen more years than her own twenty-two, in a brown Palm Beach suit and without a hat. Her first swift thought, as she rose, was that he looked like a fox, but then she saw, his face towards her, that his chin and nose were not actually pointed and his brown eyes were opened too wide to look sly. The eyes took her in, all of her, with so brief a displacement of their focus into her own that it might have been lightning leaping a gap, and she was disconcerted.

"I'm Tecumseh Fox. Mrs. Trimble says your name is Nancy Grant. You want to see me?"

Fox has a second in command, a guy named Dan Pavey, square faced and given to tramping in and out as opposed to Fox's 'quick light steps'. As a sidekick, Pavey turns out to be pretty unreliable which begs the question why Fox should rely on him so heavily. So we look for more than meets the eye and in this book, at least, we don't get to find the answer. At least, I don't think we do.

At any rate, we begin with the death of Ridley Scott, millionaire industrialist. Apparently he has been murdered while at his secluded bungalow in upstate New York - Mr. Kisco, to be exact. Nancy Grant's uncle Andrew has been arrested and she's come to Fox to untangle Uncle Andy from the entanglement. I might add that in my view, the motive for suspecting Grant is weak to begin with.

But the rest of the plot is pretty entertaining (if slightly far-fetched) given that nothing at first seen is as it first seems. People rise from the dead and then are dead again and characters who were thought to be in one specific place turn out to have been someplace else. Lots of mis-direction.

The problem with all this is that none of it is believable on any level and worst of all, while reading, you don't really care who is who and what is what and eventually, who did what to whom. The characters are just not especially likable. Even Techumseh Fox takes a while to warm up to. And yet I kept reading. How does that work? I don't know, maybe it only works with authors you love. Or maybe it's one of those books that is better in the actual reading than in the thinking about it afterwards.

I would not turn down the chance to read the next two in the series.

P.S. Here is Tracy K's review of DOUBLE FOR DEATH from last year, with a bit more detail.

Friday is Forgotten Book day around these parts (most of the time, anyway) so don't forget to check in at author Patti Abbott's blog to see what other forgotten books other bloggers are talking about today.