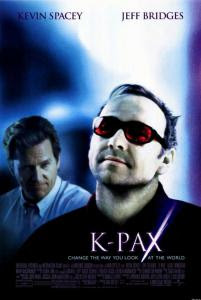 I watched K-PAX a while back only because my daughter assured me it was a terrific movie. I had steered away from it (though I like Kevin Spacey) because this was apparently the kind of story line I dislike, i.e. a sympathetic main character sees or believes or knows or is something that nobody else in the movie sees or believes or knows or is. In this type of screenplay, the easiest ending is often an accommodation which is neither fish nor fowl. (Some might think that this film has that sort of ending and they might be right.)

Here's my gripe: For this sort of thing to work for me, the plot MUST provide a big pay-off in the end, otherwise why bother setting it and us up? 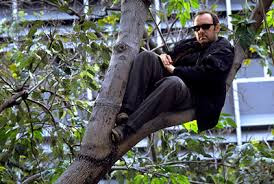 Prot up a tree.

Well, I'm happy to say that though I began to despair  three quarters of the way through, eventually, K-PAX delivered very nicely, despite the 'fish nor fowl' comparison. The film is a 2001, sci-fi, mystery(sort of) film directed by Iain Softley with a screenplay by Charles Leavitt based on a novel by Gene Brewer, starring Kevin Spacey, Jeff Bridges and Alfre Woodard.

Spacey (who is wonderful here) plays a troublesome patient (most of the film takes place in or around a mental institution) named Prot, a self-assured, philosophical type who claims to be from the planet K-Pax. Bridges plays psychiatrist Mark Powell who attempts to 'cure' Prot of his 'alien delusion'. But the thing is, Prot and his beliefs are having a beneficial effect of several of the good doctor's more hard-case patients. 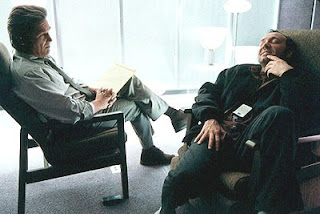 In fact, Prot's beliefs, opinions and philosophy soon begin having an effect on the doctor himself. Not that that part of the plot mattered much to me one way or the other. Jeff Bridges is part everyman, part wooden Indian and part filter, a kind of requisite - occasionally tone deaf - wall for Prot to bounce (philosophically speaking) against. Otherwise who would Prot expound to? Powell is soft and squishy to Prot's hard charm. That Powell begins to doubt himself is to be expected but not really, that overly interesting. Or maybe I should sat that Bridges doesn't make it that overly interesting.

And expound Prot does, in a very dreamy but self-assured way that catches you up, makes you want to be in his presence as often as possible. He is full of empathy and complexity, a charmer with a hidden agenda, perhaps messianic, perhaps not. 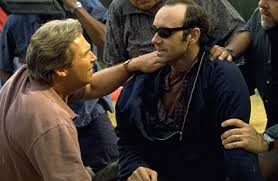 Perhaps inviting Prot to a family event was not the best decision.

The audience is meant, I think, to believe completely in Prot simply because Spacey does such a fine job of believing in Prot himself. Even when his story begins to fall apart - or so we think - we want to keep believing. But the truth is, I almost turned off the film at that point, sensing I was doomed to disappointment.

In the end you need to pay strict attention because if you leave the room for a minute or two, you'll believe the film ends one way. But if you stay glued to the screen, you'll see that the film actually ends another way - it just requires a bit of thinking and putting two and two together. Ambiguity works here though in truth, there's less ambiguity than first meets the eye.

Lots of people, i.e. reviewers, probably would have preferred a rational ending with explanation - it seems to be that way these days (though this movie was made fourteen years ago) with audiences inured to 'what if'. And yes, there is some sentimentality on display, but since my (not really mine but can't remember where I read it) meaning of sentimentality in plot lines is 'unearned emotion' - I'd say it doesn't completely apply here. Besides, sentiment is not always the kiss of death.

I'm probably going to want to see this film again one of these days, just to make sure that the ending I saw is the ending they meant. Jeez, I hate to be cheated. 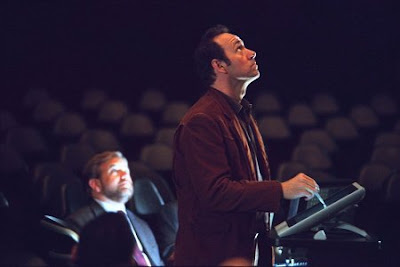 Where exactly is K-Pax?

Later, don't forget to check in at Todd Mason's blog, Sweet Freedom, to see what other Films, Television and/or Other Audio-Visuals other bloggers are talking about today.
Posted by Yvette at 12:30 AM