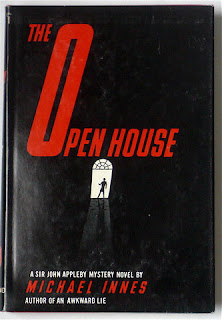 This book has one of the best beginnings EVER! (At least the kind of beginning I love.) Retired Scotland Yard man, John Appleby, now Lord Appleby, is driving alone on a lonely stretch of road at night...

"The sudden immobilizing of his car hadn't much discomposed John Appleby, but the subsequent failure of his electric torch was another matter.

Not that what had happened to the car wasn't absurd enough to make anybody cross. The night was uncommonly dark and the road unfrequented; he had neither overtaken nor met any other vehicle for miles; there seemed to be no nocturnal pedestrianism or bicycling in this part of the countryside, so that his powerful headlights had the verges comfortably to themselves. Then suddenly there had been the tail-lights of a slow-moving van ahead of him and the brow of a hill beyond. So he had slowed, and changed down to third. Only the gears somehow hadn't engaged, and in a moment he knew why. He was waving the gear-lever in the air.

It hadn't been difficult to steer on to a reliable-looking grass verge, and there he has come to a halt and investigated. He was in neutral, he found, and in neutral he was going to remain. The confounded lever had broken off close to the gear-box. There was nothing whatsoever to be done..."

So he gets out of the incapacitated car and goes out into the night on foot expecting his trusty flashlight (electric torch to you) to last indefinitely - which it almost immediately doesn't. Then there are several more paragraphs of Appleby lost in the dark, looking for help, musing upon his predicament (and of course a Shakespearean quote comes into the mix) until:

"...Appleby moved on, and almost at once sensed that he was heading for an even deeper opacity than that which had hitherto surrounded him. Deep and large. A great rectangular block of darkness, which for a moment he thought to interpret as an enormous barn. And then, in another moment, the scene (if it could be called that) was shatteringly transformed. In place of blinding obscurity there was equally blinding light. For seconds Appleby's night-attuned vision was utterly confounded. Then he saw that what had sprung into existence before him was an imposing mansion-house. Its every window was uncurtained - and all had been simultaneously illuminated. The effect was as a great fanfare of trumpets released upon the dark."

A few moments later, eyesight adjusted, he finds the front door of this huge Palladian house standing wide open. What is a policeman (even a retired one) to do but enter and find himself suddenly thrown into an odd mystery of very strange proportions - complete with requisite dead body, of course.

Not to mention an eccentric professor named Snodgrass, an enigmatic woman, a malevolent servant named Leonidas, a long lost heir, and a suspicious vicar named Absolon. Just the usual.

Truth to tell, in the end there's not much satisfaction, as mysteries go: what the plot boils down to is a murderous tussle over an inheritance and a very odd yearly ritual gone wrong. But in this particular book, it's the weird journey along the way that saves the day and of course the company of Appleby for whom a seemingly insoluble puzzle is like a wounded gazelle to a lion.

I read this alongside (right after) Innes' SHEIKS AND ADDERS - a terrific duo if you're in the mood for this sort of thing and I have been, lately.

Friday Forgotten Books is a meme hosted by author Patti Abbott at her blog, Pattinase. Go check out the rest of today's terrific listings, I'll still be here when you get back.