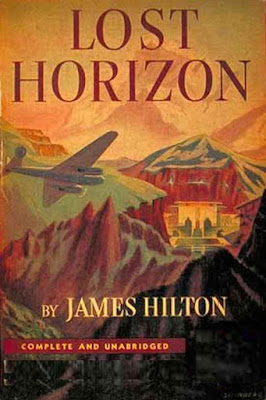 I'd seen the movie many, MANY, years ago, with Ronald Colman . But I'd never read the book until now. What brought me to it at this moment in time? Who knows. Maybe I waited just long enough. There's always the enticing possibility that due to serendipity, you are reading certain books at the perfect time in your life.  At any rate, LOST HORIZON will stay with me for a while. Don't you love when that happens? Of course this makes it difficult to jump right into another book, but I can live with that.

Let's face it, most books don't stay with you, not these days of hurried reading two and three books at a time, trying to fulfill a challenge or deadline or blog post, every one's in a hurry, hurry, hurry.

LOST HORIZON is all about not being in a hurry. Not rushing about in a frenzy. It is a book about spiritual acceptance and rationality. About taking the time to be true to your innermost self. In a way it is a book about selfishness and how that's not such a bad thing. It is also a book about - the world being what it is - the inevitability of war. An anti-war polemic about the follies of mankind that carries a grim prophecy of war (WWII was on the horizon even then). A pragmatic book full of dreams if that makes any sense. A book abundant in themes - political, moral and spiritual - worth discussing in detail. But that's something for another reviewer. I don't do that kind of thing well, so I'm keeping this short.

The main protagonist is my favorite kind of hero, the competent man. This we accept from the beginning - Hugh Conway is seen by most as an exceptional man, a natural born leader, an ex-soldier, stalwart, intelligent, handsome, with an appeal that is instantly recognizable though not entirely accessible.  In a fix, he is the man to turn to. His old school chums remember him with fascination.

Aware of this, Conway is burdened by an inner duality which he occasionally has a difficult time coming to terms with. He is a disillusioned man risen from the horrors of WWI; a contemplative man who wants to be left alone to nurse his psyche.

"A pity you didn't know him at Oxford. He was just brilliant - there's no other word. After the War people said he was different. I, myself, think he was. But I can't help feeling that with all his gifts he ought to have been doing bigger work. All that Britannic Majesty stuff isn't my idea of a great man's career. And Conway was - or should have been great. You and I have both known him, and I don't think I'm exaggerating when I say it's an experience we shan't ever forget. And even when he and I met in the middle of China, with his mind a blank and his past a mystery, there was still that queer core of attractiveness in him."

Conway has one of those vague government jobs as consul for the British colony in Baskul (he is regarded as too independent to be given anything more important to do), a country situated in the Middle East. He seems to be coasting through life because as he says, his real life took place between the years 1914 and 1918. The war has derailed him, in a way, made him unfit for 'normality'. I believe this happens to many soldiers, probably, in every war. I often think: how could it not?

On the night when Conway and three other passengers: a woman missionary, an American ex-pat, and a young British soldier who had fought alongside Conway in some battle and holds Conway in extreme hero-worship, are evacuated from Baskul in the midst of escalating unrest, the plane is hijacked by the pilot.

After a harrowing journey, the plane crash-lands high in a remote area of the Himalayas, and the hijacker is killed.

We all kind of know what happens next, but it's still thrilling to read. Of the four passengers, Conway is the only one who realizes at journey's end that he has come home. That here is the place he's always yearned for and never knew existed, the place where he can, perhaps, compromise the duality in his troubled nature.

Shangri-La: an almost inaccessible (but not quite) paradise hidden away from the world, where time has little meaning, and everyone lives in relative harmony. A spiritual place of beauty and mystery. To this day, even if you haven't read the book or seen the movie, the name of Shangri-La still carries a magical resonance.

Upon their perilous arrival at the lamasery, The High Lama, an old man ancient in years, recognizes in Conway, a fellow 'passionless' being, someone with whom he can talk, someone to whom he can reveal the secret of Shangri-La.

LOST HORIZON is a mystical fable with an extraordinarily pragmatic view of religion and was, I think, Hilton's favorite book. Though, to Hilton's surprise, it took a while to become the classic it is today.

Because of the time in which it was written, there is, of course, some hint of 'the white man's burden' but not overly so since everyone in Shangri-La lives in harmony, primarily because each person there knows his or her place. (And perhaps that is the secret to human happiness.) It is a community of workers and thinkers - the thinkers in the lamasery on the plateau of a high mountain, the workers below, separate but happy in their separateness. They know of the outside world, but are content not to travel there.

What happens then to the four travelers from the outside world when they land in this strangely enigmatic place, makes for an intriguing and thought-provoking tale of folly and courage.

Usually we check in at Patti Abbott's blog, to see what other forgotten or overlooked books other bloggers are talking about today. But I see that Todd Mason is doing hosting duties today at his blog, Sweet Freedom. So don't forget to check in there.