Forgotten Book: APPLEBY'S END (1945) by Michael Innes. Okay, one more post about Appleby and Michael Innes' writing and I'm done. With Appleby that is. For now, that is. 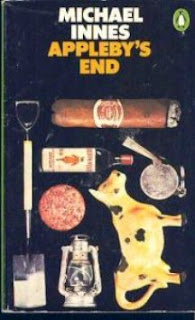 Bear with me, I simply have to tell you about this one and then I promise to stop - for awhile. Lately, in between other books, I've been re-reading a few of Michael Innes' Appleby books - the ones I have in my own library and while I'm at it, making up a list of the Appleby books I don't have and must get. Always a good thing to do, I think. But I'm not going to heap tons of Appleby reviews on you - not to worry (three isn't 'tons'). This is the last one. You know how much I enjoy the books.

So I beg your indulgence. I don't get into these moods often.

Well, actually, yeah, I kind of do.

But I mean no harm.

The very bizzare, APPLEBY'S END is a one of Innes' more surreal (the perfect word, Les) endeavors and suffice to say you'll either like it or hate it and if you hate it you'll put it down and never pick it up again. Or if, like me, you keep chugging right along and roll your eyes at the parts you don't quite get and enjoy the parts you do, then fine. Don't expect a long, detailed review - this is a kind of mini-review (well, maybe not mini-mini) - I'm hoping that Sergio or John or Les will take up Innes on their blogs one of these days and give us several of their well-written, well-wrought, well thought-out reviews and expert analysis, so we can take the books apart and have a really good, long chat on the fascination of Innes and Appleby.

APPLEBY'S END is the book in which Appleby meets his future wife Judith Raven, an erstwhile sculptor with an eye for what she wants. Needless to say, it is not the most conventional of romances - if, indeed, it is a romance at all. I'd call it more or less the inevitable outcome of the meeting of two well-bred pragmatists (with a well-bred tolerance for absurdity) with standards to uphold. But maybe that's just me. Appleby, ever the gentleman, apparently has no fear of his future wife's relations, though possibly he should have. But after all the strange things he's seen in his life, it's possible that the spectre of outlandish eccentricity holds no fears for Appleby.

At any rate, forget about that, as I mentioned, this is not the sort of book that inspires instant affection in the reader, it's more a book you may instantly hate or, perhaps (like me) you'll be stunned into a trance-like state, transfixed into immobility. It all depends, in the end, on your tolerance for British eccentricity and literary preening. I happen to enjoy it and can tolerate quite a lot.

In this book, there are destinations improbably named Sneak and Snarl. Yes, a village called Sneak. And a village called Snarl. Appleby needs to get to Snarl, and in that effort, he is on a train chugging along in the night though we are not given a specific reason as to why he should be.

One of the passengers sharing the compartment is a gentleman with a literary bent (he's in the middle of writing an encyclopedia) and an odd willingness to make himself useful to Appleby.

"I beg your pardon."

"Yatter. A ghastly little place. Yatter, Abbot's Yatter and King's Yatter. Then we come to Drool...I think you said you hoped to change at Linger?"

"You think there may be some difficulty about changing at Linger?"

"But presently" - Mr. Raven spoke briskly and inconsequently, as one who avoids the premature disclosure of discomfiting intelligence - "but presently we shall be filling up. .....I suppose it was your aim to get to Sneak or Snarl?"

"I've booked a room at the inn at Snarl. And I certainly hope to get there tonight."

Mr. Raven shook his head. "I am very sorry to have to tell you that it can't be done. The train for Snarl never waits to make this connection."

Appleby stared at his companion aghast. "But," he said feebly, "the timetable - "

Again Mr. Raven shook his head - in commiseration, and also perhaps in some amusement at the extravagant expectations of the urban mind. "My dear sir, the timetable was printed long before Gregory Grope's grandmother fell down the well."

"For a long time she was just missing, and her house at Sneak - a very nice house - stood empty. But when she came up with the bucket one day......and it was quite clear that she was dead, Gregory Grope's mother moved to Sneak from Snarl."

"Do I understand," asked Appleby resignedly, "that Gregory Grope is the engine-driver?"

"Exactly so. If I may say so, Mr. Appleby, you possess a keen power of inference. Gregory Grope drives the Snarl train, and the train of course spends the night at Snarl. But Gregory has to get home on his motor-bicycle to Sneak, and his mother is decidedly strict about late hours. It appears that it was as the consequence of a nocturnal diversion, somewhat surprising in a woman of her years, that old Mrs. Grope came to her unfortunate end. But I digress. The point is that Gregory and his train now leave Linger somewhat earlier than before. Of course you could complain to the district superintendent and I dare say something might be done about it in time."

All manner of strange events will occur, a near disaster on the river in the middle of a snow storm, resulting in Appleby's having to spend the night in a barnyard - in a haystack, actually, alongside the previously mentioned Judith Raven - an event that more or less necessitates an instant matrimonial engagement when gossip in the village runs a bit amok. Appleby is a gentleman, after all. Although nothing of import actually happens in the haystack - that I can tell, anyway.

Of course, I haven't mentioned the head buried in the snow...

Later, if you're still reading, you'll get to meet one of the more endearing characters Michael Innes is so adept at creating, Mr. Smith, the local vicar:

'Appleby knocked and the door was opened - or rather manipulated, for it seemed to be possessed of only one hinge - by a red-faced, white-haired clergyman standing some six-feet-four in badly cracked shoes. "Come in," said the clergyman; "come in, by all means. I don't know you from Adam - though I've always had a shrewd idea, mark you, that Adam would be eminently recognizable if one passed passed him in the street. Bother this door! I must tell the village carpenter that here is something very like a work of corporal mercy...A wise dispensation, no doubt, since we come rather noticeably short at present in the matter of Faith. Come in. Smith is my name and this is Hodge, my cat." He pointed to a large brindled creature sedately posed in the crook of his arm. "I was just going to butter the buns."

Near the end the denizens of Sneak and Snarl and Drool and Linger (among others) run about the snow covered countryside in frenzied pursuit of a witch and just when all seems lost - inheritance-wise - and the reason for all the madness revealed, there's a final exclamation/revelation which will leave you smiling and shaking your head.

Unless you gave up early and threw the book across the room.

Friday Forgotten Books is a meme hosted by Patti Abbott at her blog, Pattinase. Don't forget to check in and see what other forgotten books other bloggers are talking about today.

Oh by the way, here's my previous APPLEBY'S END review from a couple of years ago - John reminded me that I'd written about this book before. Sorry about that.
Posted by Yvette at 12:30 AM