Tuesday Forgotten Movie,Television, and/or Other Audio-Visuals: AS YOUNG AS WE ARE starring Pippa Scott and Robert Harland

I'd remembered this little potboiler of a movie as one I'd seen with my mother on a double bill at the local movie palace once upon a time in the long ago world of such things as double bills and ten cartoons - all inclusive. I also remember being embarrassed because there are several heated clinches between the 'hero' and the 'heroine' and I wasn't used to sitting next to my mother during this sort of 'realistic' love scene. But to my surprise, my mom seemed remarkably complacent about the whole thing.

At any rate, this is not exactly a shining gem of a movie, but still, I think, worth seeing for the anachronisms (most of them laughable) of the times and the aforementioned 'heated clinches' which seemed to me to be rather daring, then. Not so much today when a kiss singles the immediate jumping into bed of the people involved. Ah well, back then, we used our imaginations. Remember when we had them?

Robert Harland and Pippa Scott were steamy enough for 1958 and then some. If you enjoy the good old fashioned clinches of the past, then this movie is for you. Not to mention Robert Harland's smoldering eyes when he looks at his Pippa aka Kim Hutchins, early in the movie. It's hard to fathom why Harland never made it big as a leading man, his acting wasn't great, but surely his good looks and 'smoldering' should have counted for something.

AS YOUNG AS WE ARE is a 1950's film directed by Bernard Girard and written by Meyer Dolinsky based on a story by William Alland, which purports to show the plight of a couple of young California teachers just out of university, who, for vague reasons, can't seem to get jobs in schools at the locations of their choosing so are forced to travel to an isolated desert town which apparently has the only school district willing to give them work. I know - really?

Well, anyway, off they go with the misgivings of their families. The naive Kim Hutchins (Pippa Scott) and the less naive Joyce Goodwin (Majel Barrett - remember her from Star Trek? She was married to Gene Roddenberry.) driving off into the desert looking for their fortunes - not in gold, but in educational careers and husbands.

On the way they have car trouble on a lonely road and sure enough, a couple of drunken louts stop to give the young ladies a hard time. But when all seems lost, our hero, Hank Moore (well, you knew his name had to be Hank or Joe or something like it) drives up in his truck with, not one, but two giggling girls sitting beside him. He coolly stops to help the ladies in distress, routs the drunks, takes a good look at Kim (Pippa Scott) and is instantly smitten.

Hank (Robert Harland) is a tall, muscular, smoldering lad (yeah, I stress the smoldering, but really he's so good at it) whom Kim finds hard to resist. Later, after the road side incident, he shows up at the young teachers' boarding house and asks Kim out for a beer. She goes with him, eagerly, much to Joyce's chagrin at being left behind, but hey, threes a crowd. Of the two teachers, starry-eyed Kim is supposed to be the pretty one and Joyce the 'not-so-pretty' and there are hints that Joyce is the more experienced one. And you know where that got you in the 1950's.

Anyway, it's not much of a date destination, but what can you expect from a desert town in the middle of nowhere? They go to the local bar and grill, have a couple of beers and are soon slow dancing and well, you can guess the rest. Think: heated clinch. Actually, for a teacher, a supposed molder of young(er) minds, Kim seems a bit, well, the word 'easy' comes to mind, but maybe I'm just being picky.

Soon enough storm clouds appear on the horizon as we kind of thought they would. Imagine Kim's shock and horror when on her first day of teaching at the high school, who should stroll into class but Hank Moore. He is a Senior at the school - hard to believe since he looks older than everyone else and in real life was actually a year older than Pippa Scott. But there he is. Suprise. Poor Kim, she had no clue since Hank hadn't troubled to tell her once he'd found out she was one of the new teachers. 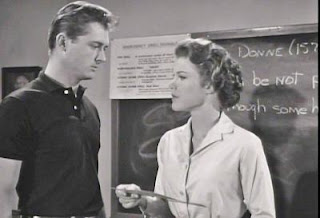 Of course, Kim immediately cancels their personal life. But Hank isn't having any of that. He is thoroughly smitten to the point of idiocy and smitten he will stay.

The second half of the film is an over-reaction by EVERYONE, and I could have thought of several other ways out for the characters, but this was the 50's and as everyone knows inappropriate sex or even the hint of inappropriate sex back then caused histrionics. Remember SPLENDOR IN THE GRASS? - sex caused nervous breakdowns if you weren't careful.

At any rate, do see the film for the reasons I've given you - I think it might be available on Netflix. (Amazon has it too on pay for view.) It's a fun anachronistic piece worth a look if only for all the prurient smoldering or perhaps for the chance to shake your head and think back to the good old days when everything seemed so clear cut.

Another thought: a film based on this sort of forbidden relationship should give you a bit of the creeps, don't you think? Well, this one doesn't. Probably because you don't believe for a moment that Hank Moore is a Senior in high school.

Don't forget to check in at Todd Mason's blog, Sweet Freedom, to see what other films and whatnot other bloggers are talking about today.
Posted by Yvette at 12:30 AM