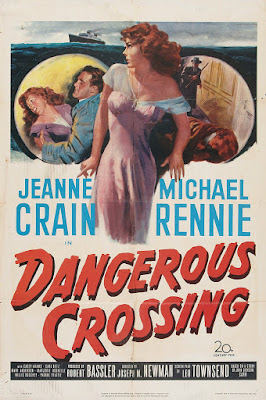 Stumbled across this film on youtube the other day and when I saw the magic name of English actor Michael Rennie, that's all it took. I am a HUGE fan of actor Michael Rennie's cheekbones. I mean, if you remember THE DAY THE EARTH STOOD STILL, you'll know what I'm talking about.

Rennie usually looked as if he had, indeed, come from another world. He was so soothingly charismatic and never quite seemed to mesh within any given cast of any given movie (well, except for the above named one ), and as the future Saint Peter in THE ROBE he was - unintentionally, I'm sure -  super sexy, putting lead actor Richard Burton in the shade. Rennie always stood out in the crowd. As an actor he was quietly unique, elegant, and exceptionally sexy and my dears, those cheekbones. I mean, swoon. Rennie was also, one of my mother's favorite actors, so there's that in his favor as well. 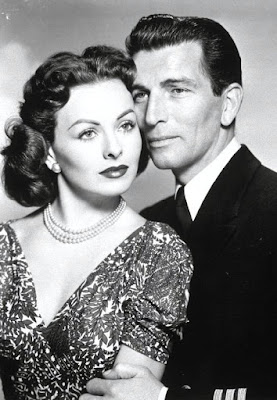 Between you and me, besides the fact that DANGEROUS CROSSING takes place on board a luxury ocean liner and Michael Rennie plays the sympathetic ship's doctor, there is NO other reason to see this movie. Unfortunately Jeanne Crain is spectacularly awful in the part of a young bride whose hubby disappears even before the luggage is unpacked in their stateroom. Her scenes of frantic hysteria border on the laughable, the kiss of death in a supposed thriller. Ms. Crain (ordinarily a decent actress) is so over-the-top that you really do not blame the captain of the ship for wanting to lock her up.

But in a perverse kind of way, it's sort of fun to watch Crain emote, especially alongside the always calm, cool, and collected Michael Rennie. 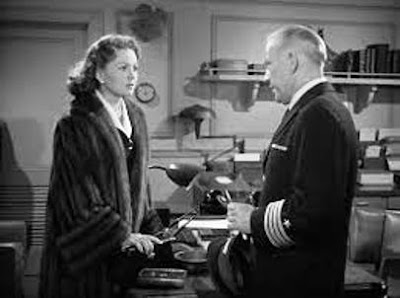 Willis Bouchey as the harried ship's captain, a man with zero tolerance for loony ladies. 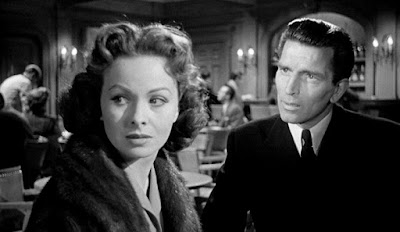 Are you very sure you're married?

DANGEROUS CROSSING is a 1953 film directed by Joseph M. Newman with a screenplay by Leo Townsend based on a radio play by the American mystery writing great, John Dickson Carr. The film co-stars Carl Betz (who went on to play Donna Reed's hubby on the popular Donna Reed Show for years). In this film, Betz oozes with sleaze, cast as the boyish hubby (with a penchant for disappearing) on his honeymoon. (She should have pushed him off the gangplank.) 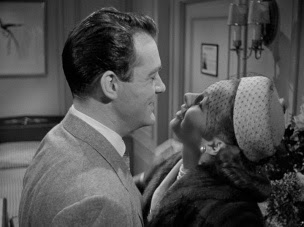 Carl Betz, so slimy as a young married.

Since this is a thriller of a certain sort, there are almost constant billows of fog, creepy passengers lurking - seemingly concerned with the heroine's flights of hysteria - there's even a passenger with a cane that tip-taps ominously as he walks the deck. Uh-oh. 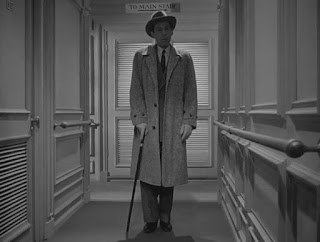 (Lots of red herrings crossing the Atlantic on this trip.) There also a very annoying fog horn which blows almost constantly through the night scenes. No wonder the bride is terrified. Jeez. 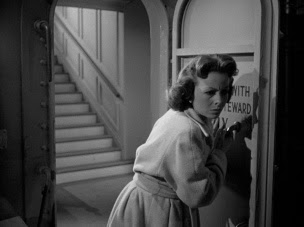 Searching for hubby in all the wrong places.

If you, like me, are a fan of Michael Rennie's cheekbones (or, for that matter, have a deep appreciation for the sound of foghorns), then you must watch this film, available (for now) on youtube. (See link below.) 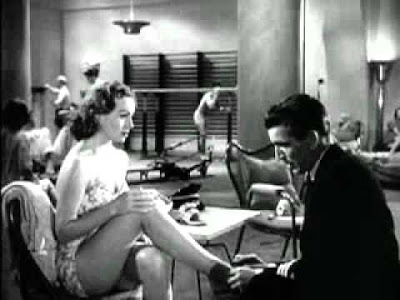 Let me tie up your sandals, m'dear.

It is hard not to like a film which is overloaded with shadowy atmospherics and all the action takes place on board a luxury liner AND you get to watch the leading lady and Michael Rennie play shuffleboard and other shipboard games. 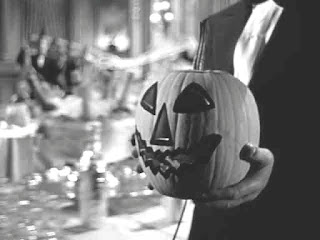 PLUS there's a Halloween night dance in which the heroine gets to make an emotional fuss.

DANGEROUS CROSSING's story-line has a slight resemblance to the British classic (at least, classic to me) SO LONG AT THE FAIR which starred the fabulous duo of Jean Simmons and Dirk Bogarde. A marvelous film that I can't recommend highly enough and which, unfortunately, is not available to watch - anywhere. I live mostly on the memories.

John Dickson Carr's radio play, CABIN B-13 on which the screenplay is based, was apparently part of a series of stories in which the ship and the doctor were the only constants. You can learn more about the film, in terms of relevant details and more about the radio productions including a listening link, from Sergio's terrific post at his blog, TIPPING MY FEDORA. I've just realized he wrote about DANGEROUS CROSSING three years ago.

Since it's Tuesday, don't forget to check in later at Todd Mason's blog, Sweet Freedom, to see what other Forgotten (or Overlooked) Films, Television or Other Audio/Visuals other bloggers are talking about today.