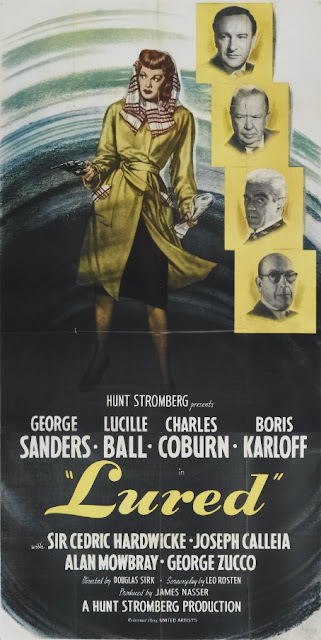 The cast of LURED is a veritable 'who's who' of character actors from the 40's including a couple of actors cast against type which is something I always find intriguing. LURED is a 1947 black and white film directed by Douglas Sirk who, as you might know, later went on to direct a bunch of sumptuous 1950's films in dramatically lavish color. In fact, I checked the list of his films and discovered I'd seen quite a few - in theaters and later on television. All Sirk films had a certain symbolic style and look to them and all starred the most beautiful movie stars of the day. My favorite? ALL THAT HEAVEN ALLOWS with Rock Hudson and Jane Wyman.

LURED (the film was later re-named PERSONAL COLUMN, a lukewarm title that may have doomed the film's success at the box office) stars the very glamorous Lucille Ball and a dapper George Sanders, but never mind that, check out this cast of supporting characters:

Sir Cedric Hardwicke plays a  nightclub owner/businessman. Hardwicke was the father of Edward Hardwicke who played a memorable Dr. Watson to an equally memorable Jeremy Brett as Sherlock Holmes for Granada television.

Alan Napier (who later went on to play Batman's man-servant in the TV series starring Adam West) plays a detective. I'm a big fan of Napier. Most especially as the charming veterinarian in THE UNINVITED, a terrific ghost film starring Ray Milland.

George Zucco (one of my all time favorite villains, especially as Moriarity in a Sherlock Holmes film with Basil Rathbone) plays a lovable detective. Yes, I said, 'lovable'. Go figure.

Boris Karloff plays a poor, demented fashion designer with delusions. He lures Sandra to his apartment where he has her put on one of his designs and sashay around in a pretend fashion show for an audience of empty chairs, two mannequins and a bulldog.

Gerald Hamer plays a tout. Those of you familiar with the Sherlock Holmes films of the 40's starring Basil Rathbone will easily recognize Hamer (if not by name) as one of several actors who repeatedly worked in these films, sometimes playing the villain, sometimes playing a victim or witness or whatnot.

It's a veritable feast of recognition - that is, if you enjoy vintage films or like me, grew up watching all these actors in a variety of roles in a variety of films. In those days, character actors were memorable and seemingly plentiful.

The plot of LURED is a kind of mish-mash mystery/thriller/romance. The first half or so of the film has to do with the disappearance of several young women in London (Hollywood backlot). The police are stumped but aware that a serial killer is apparently at work. The killer's modus operandi involves placing ads in personal columns to lure his victims.

After a show she was in closes in four days, American dancer Sandra Carpenter (Lucille Ball) is stranded in London and working in a dance hall. She is concerned when her friend Lucy disappears after dating an unknown man whom she met through a personal ad. Uh-oh. 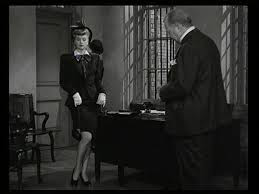 Sandra goes to Scotland Yard and is almost immediately recruited by Inspector Harley Temple (Charles Coburn) to act as bait for a killer which he explains has probably done away with her friend Lucy, not to mention a few other young women as well. Since Sandra has smarts and gumption, she goes along with Scotland Yard's plan and is soon answering personal ads accompanied by detective guardian H.R. Barrett (George Zucco) who lurks in the shadows and springs into action as needed. 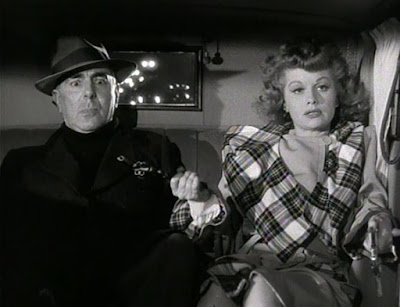 The best scene in the movie. It showcases Lucille Ball's snappy comedy timing and also shows us a rare side of George Zucco. I can't help it, I'm a George Zucco fanatic.

Previously, while at the dance hall, Sandra had been approached by an emissary of London nightclub owners Fleming (George Sanders) and Wilde (Cedric Hardwicke), the chap had liked Sandra's classy looks and handed her a card, mentioning an upcoming audition for a new club. Manna from heaven for a stranded showgirl. She keeps the audition in mind as she sets out on her detecting duties. When she does meet up with Robert Fleming (Sanders), its at a concert where she's gone to meet a 'music lover' who'd placed a personal ad. The sparks fly between Sandra and Robert (a definite ladies man) and before you know it, they're in love and planning a future. Yeah, I know, George Sanders? I don't think so. But I did mention casting against type. 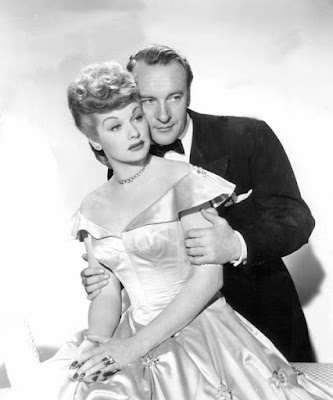 First let's back up a bit, when Sandra goes to work for Scotland Yard, there are a couple of hair-raising (sort of) episodes in which she meets up with several men who might or might not be the serial killer, including one of those 'meet me under the bridge at midnight' scenes so beloved of thriller makers. Though in this case it's not under the bridge but under a lamppost in the dead of night. I know, I wouldn't either, but this is the movies. 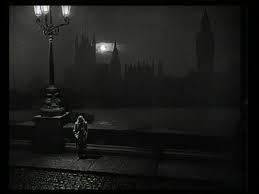 Meet me under the lamppost on a dark bridge and come alone. Okay.

Incongruously, at some point the film goes off the rails and becomes, for a while, a romantic comedy. It's almost as if Douglas Sirk forgot all those dead girls. But then near the end, the serial killer returns, the wrong man is arrested, and finally, with Sandra as bait once again, the real killer is apprehended in the nick of time. The villain's identity is no real surprise, especially for those of you familiar with the actors involved. I can say no more. 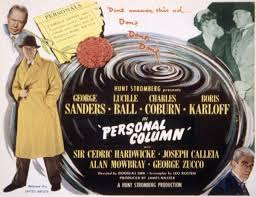 Yeah, that title will absolutely lure them in. source

An entertaining, fun movie. Not great, but good enough to pass the time with on a rainy afternoon or evening. Lucille Ball is always interesting and let's not forget that great cast of character actors.


Remember to check in later at Todd Mason's blog, Sweet Freedom, to see what other Forgotten Films, Television or Other Audio/Visuals other bloggers are talking about today. There's always something interesting.