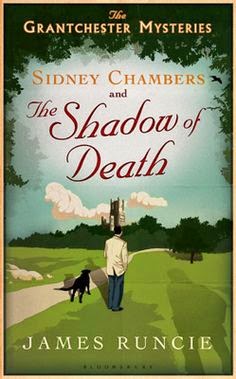 SIDNEY CHAMBERS AND THE SHADOW OF DEATH by James Runcie.

Thanks to Nan at Letters From Hill Farm for her introduction to Canon Sidney Chambers, the quietly intriguing 'hero' of Runcie's evocative tales. This was just the sort of thing I happened to be in the mood for. (In truth I am generally eager to read these sorts of gently told mysteries which are, really, lately, few and far between.)

Though some of the puzzles unraveled by the good Canon are violent in nature (you can't get more violent than murder), the stories are really about the man himself and how the good Canon goes about dividing his time as a soul-searching man of the cloth and a clue-searching detective. The time and place is 1950's Grantchester, Cambridgeshire (and occasionally London and even Germany). Cambridge University is just a stone's throw away and that ambiance, though occasionally one of quiet menace, is of a busy, sheltered university center with all its induced prejudices, contradictions and intrigue. The stoies are perfect for a late night comfortable read. In fact, I read both of the Sidney Chambers books over three nights, though I did pause to linger lest I go through them TOO quickly. 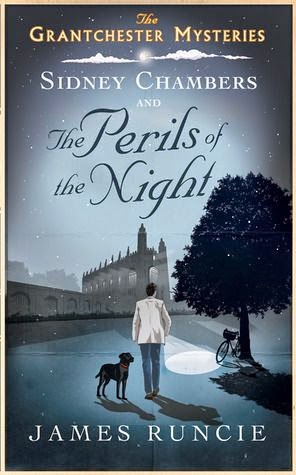 SIDNEY CHAMBERS AND THE PERILS OF THE NIGHT by James Runcie

The second book in this new and very beguiling series featuring Canon Sidney Chambers, full time Vicar of his church and congregation and part time detective. With the help of his close friend Inspector Keating (with whom Sidney has a weekly pub date to play backgammon and drink a couple of pints), the good Canon is usually 'in' on the latest Cambridge mystery. Keating is only occasionally reluctant to use the Canon's keen mind and deductive abilities.

These books are a loving though clear-headed (and inventive) look back at times long gone. The atmosphere of a claustrophobic university town is perfectly captured by the author and his characterizations make for the sorts of people one would want to know and live side by side with and that's about as good a compliment - as a reader - I can make to a writer.

In this second book, there's spying and secrets and an unexpected incarceration in an East German jail - don't forget that Cambridge after the war was a hotbed of espionage recruitment. There's also a long term cricket match with all the cricket minutiae one could want - unfortunately I don't understand word one about cricket - but despite that, I enjoyed Sidney's enthusiasm for the game and didn't skim the chapter at all.

Both books are made up of six linked short stories each, with recurring characters and setting. Both books are a very special look back in time to a world getting a grip on itself after a shattering world war. 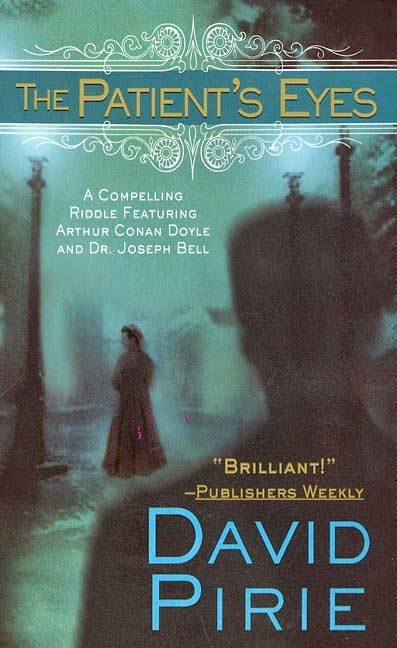 THE PATIENT'S EYES by David Pirie

The exact opposite of the Sidney Chambers books in nature and grim deed, this darkly absorbing newish series (three books along) by David Pirie, another author I'd never heard of, tells the story of a young and impoverished Dr. Arthur Conan Doyle (before he took to the writing of the Holmes tales) and his mentor and teacher Dr. Joseph Bell of Edinburgh University.

The brilliant Joseph Bell, highly skilled at deductive reasoning, is said to have been the model for Sherlock Holmes and indeed, the second book refers to 'the strange beginnings of Sherlock Holmes' as a sub-title, in case the reader wasn't aware. I looked askance at these stories since I am not completely fond of Holmes pastiches (unless they are exceedingly well done) but since these books don't technically feature Holmes but his creator, I took the plunge.

Doyle, just out of university, opens his first medical practice with the questionable help of an old university chum and fellow doctor. One of his patients is an enigmatic young woman named Heather Grace. She is an orphan whose parents were brutally murdered years before and who has been lately bothered by eye trouble, not to mention that she thinks she's being followed as she cycles her way daily along a lonely country road near her home. Of course here we get a glimpse of the Holmes story which Doyle will later write and title, The Solitary Cyclist.

There are other hints woven throughout both books which foretell later Holmes tales, hints especially intriguing to those of us familiar with the Holmes canon. Since this is fiction the author is free to invent various sorts of crimes and murderous villains for the real-life Bell and Doyle to encounter.

Behind these dark doings, there are two underlying tragedies: first, the continued incarceration in a mad house of Arthur Conan Doyle's uncontrollably alcoholic father and second, the memory of Doyle's lost love - a young woman brutally murdered (I think in the second book, THE NIGHT CALLS, which I haven't read yet simply because my library doesn't have it) by the vicious sociopath Thomas Neill Cream (1850 - 1892). Cream was a real person, a serial killer who used poisons as his weapon of choice.

The settings are Edinburgh and Victorian England, but far removed from the niceties of country manor living and afternoon tea. These are grim and often ghastly tales which kept me reading (a bit uneasily) late into the night. 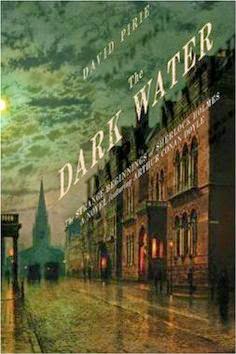 THE DARK WATER by David Pirie

Here we meet the odious Thomas Neill Cream, mass murderer and nemesis of young doctor Doyle. In fact, the book begins with Doyle in harrowing captivity. How he escapes and makes for his mentor Dr. Bell who at first has a hard time believing Doyle's outlandish story, makes for a grim and daunting sequence in and of itself. But there will be more.

Soon Doyle and the brilliant Bell begin their own personal man hunt for a merciless killer who has apparently vanished yet again. Evidence against Cream is non-existent hence their reluctance to involve the actual police. Doyle and Bell are on their own. (More or less.) Doyle very much a Watson to Bell's Holmes.

The setting in the latter half of the book is one of the most anguished areas of Great Britain: Dunwich in the English county of Suffolk. Once a thriving seaport with many hundreds of residents, it was by Doyle's time a wretched, secluded and lonely place with very few actual inhabitants. Sunk into the sea by storms over centuries, and riddled with tales of witches, runes and dark doings, this seems the perfect place to hunt down an unspeakable villain. 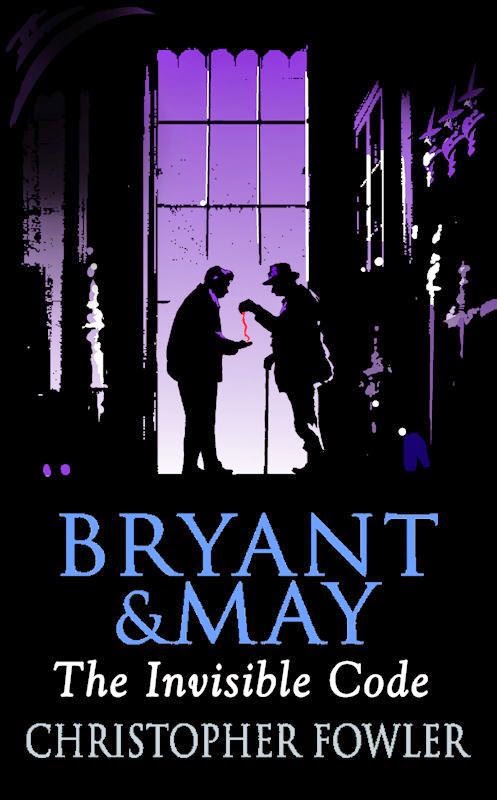 THE INVISIBLE CODE by Christopher Fowler

If you're not familiar with this amazing series, then drop everything and make yourself familiar as quickly as you possibly can. I know I tend to overuse the word 'brilliant' but really I can't think of another word to describe this incredibly rich and engaging series. It is so different, so uniquely Christopher Fowler, so rapturous in its love of the minutiae of history (London and its environs) that I can't liken it to anything else being written today.

THE INVISIBLE CODE is the tenth in the series featuring and unlikely pair of policemen: the extraordinarily cranky, sartorially challenged, octogenarian detective Arthur Bryant and his cohort, the slightly younger, cleaner and more sartorially elegant John May. Both are members of London's Peculiar Crimes Unit which is exactly what its name implies. Peculiar and eccentric go hand in hand in this series known for outlandish, inventive and violent criminal happenings.

This is a series that probably benefits from being read from the beginning, although not necessarily. It's all up to you. Though the first book in the series, FULL DARK HOUSE, is a total WOW! And you shouldn't miss it.

The setting is modern day England, but the story telling and ambience seem of another time. I read and often forget it's the London of today. That's what I love most about these stories. Oh, and the characters too, of course. When I'm not smiling or laughing out loud, I'm recoiling from the ghastly doings that some of Fowler's villains get up to. It's an often disconcerting combo of emotions, but damn if Fowler doesn't make it all work.

This time out a young woman alone in a church literally drops dead. No visible signs of foul play.

Then - Bryant and May's arch enemy, their saturnine boss Oscar Kasavian, (a man who has the power and indeed has threatened to disband the PCU and force the retirement of its two nominal heads) asks for their help. His wife has been acting oddly.

(This tale by the way features two of the most sinister children it has ever been my misfortune to meet.)

Oh, and Crippen the office cat who has heretofore been assumed to be a male, is pregnant. 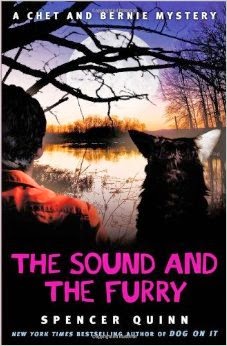 THE SOUND AND THE FURRY by Spencer Quinn

Another delightful and 'world unto its own' mystery from the prolific imagination of Spencer Quinn. Hard to explain this series without giving the impression that it's just another 'cute' gimmick. Believe me it's not. Here's the thing: the series is told from the point of view of a dog named Chet. But don't worry too much about it, jump right in. You'll get it. Don't be misled. This is as well-written a series as you will ever read. There is nothing 'cute' about it.

Chet's partner is Bernie Little (the smartest human in the room), soulful private eye in the Raymond Chandler mode. Sort of.

Somehow, the author has learned to speak the language of dogs (as we imagine their interior lives to be) and makes the whole thing perfectly plausible and occasionally hilarious. There is also the underlying warmth of Chet's touching all encompassing, all forgiving love for his human, Bernie.

Normally set in the 'wilds' of Arizona where Bernie and Chet spend most of their time rousting out unfaithful hubbies and/or wives and other assorted miscreants, this time the duo have a long distance job. They're headed to the bayous of Louisiana on the trail of a missing nephew, the only brainy member of a lamentably lack-witted family. In fact, Bernie has been hired by a member of that family, a guy he and Chet sent to prison.

There is a sequence in this book where Chet is separated from Bernie, caught up in a net by the bad guys and tossed into a river which is the domain of a huge alligator - hard to read those few pages which deal with Chet's desperate struggle to survive. Absolutely brilliant. There, I've used that word again.

Email ThisBlogThis!Share to TwitterShare to FacebookShare to Pinterest
Labels: Bryant and May, Chet and Bernie, Christopher Fowler, David Pirie, James Runcie, Sidney Chambers, Spencer Quinn, The Dark Water, The Patient's Eyes, The Sound and the Furry