Friday's Forgotten (or Overlooked) Book: NOBODY WORE BLACK aka DEATH OF A FELLOW TRAVELER by Delano Ames 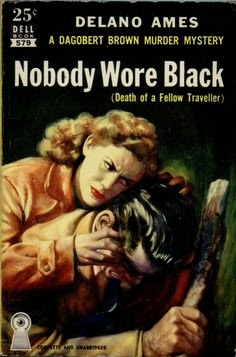 Cover art by Robert Stanley. This is the copy I have. I was lucky enough to find it though not as cheaply as I might have liked. But after all, it was Delano Ames and who knows when I might ever come across it again. (Or so I told myself.)

Yes, ladies and gents, we're touting the one, the only, Delano Ames for the umpteenth time! Step lively, step closer, you don't want to miss any details.

NOBODY WORE BLACK aka DEATH OF A FELLOW TRAVELER (I prefer the second title) by Delano Ames is yet another mystery delight featuring Dagobert Brown, a keenly intellectual chap who still hasn't found a decent job suitable to his talents (not that he's looked very hard) and his very patient and loving wife, Jane. The book begins as usual with husband encouraging wife to write yet another 'thriller' (she's got two under her belt) in an effort to fund the family exchequer.

Dagobert points out that novel writing is a domestic industry and can be done in the home. He will mend his own socks and queue up for Grippeminaud's [their cat] fish on the way to the British Museum where he is doing research - on Mayan Civilization, I believe....

"What we want" he says "is somebody to get killed. We could easily spare some of your friends."

This is true, of course, but hardly to the point. "But I don't like murders!" I say, returning to the Autumn issue of Vogue.

As usual, a trip is the only thing which will apparently remedy their financial woes. (Don't ask.) Anyway, soon the happy couple is off to Cornwall.

That is the main attraction of this particular book by the way: the setting. I love just about anything set in windswept Cornwall. Plus the delicious and unexpected episode halfway through the mystery - oh yes, mystery follows the Browns wherever they go - there's the most luscious afternoon tea that it has ever been my privilege to read about. I could easily read those particular paragraphs over and over. One day I must try and duplicate the meal that a very hungry Jane Brown indulges in. I love when characters in a book actually pause to eat a meal. Happens so infrequently, especially in mysteries and never in thrillers. (Have you ever noticed that?) Don't you sometimes want to shout at the hero STOP AND EAT A MEAL FOR GOODNESS' SAKE! I know I do.

The fact that the particular meal takes place at a run down farm with a slatternly hostess dressed in slovenly clothing makes the excellence of the tea that much more fascinating. No explanation is given. It remains a culinary mystery for all time. The food is so good that Jane is hardly inclined to decipher the mumblings of her hostess which have something to do with the mystery at hand and which, really she should have paid more attention to.

But as usual I'm getting ahead of myself.

A rather unlikable fellow traveler has fallen off a cliff and remains unmourned by all and sundry. Was the fall an accident? A suicide? Murder most foul? What do you think?

Questions that plague: Why is the victim's sister so oddly nervous? Why is her devoted hubby so calm? Come to think of it, explain this marriage please. And oh by the way, why is that beautiful young actress (travelling with her director and filming a few scenes for her latest movie along the way) so obviously unsettled? Why is the voluptuous proprietor of the pub so skittish? Why is her lout of a boyfriend (a local farmer) so jealous? Why is his frowzy mother so talkative? And what about those two obstreperous harlequin Great Danes?

This time out Dagobert faces a definite moral quandary and just when he thinks he's found the way out, turns out, he hasn't.

Another wonderful entry in this charming series which should, I say again, be much, MUCH better known and appreciated.

Since it's Friday, don't forget to check out the other Forgotten (or Overlooked) books list at Patti's blog Pattinase.
Posted by Yvette at 8:00 AM