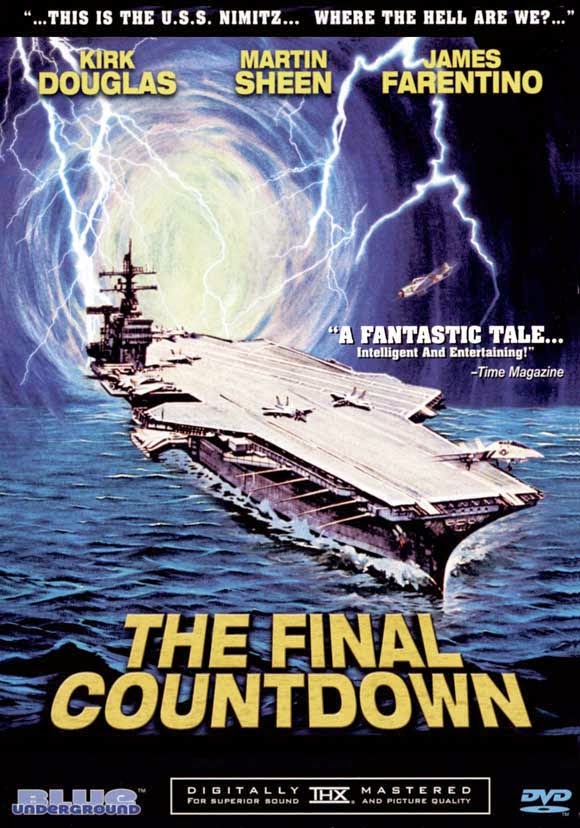 This is a film that is best seen up on the big screen so there's that to consider. It's also one of those films that could and should have been much better since the original premise was so fantastically inventive: What if a modern day (well, let's say modern day 1979) aircraft carrier with full compliment of planes and bombs and whatnot, was suddenly scooped up into some sort of time vortex tunnel (kind of like a sideways tornado complete with noisy special effects) and then spat out the back end into 1941? Specifically, December 8th, 1941 - the day before the surprise Japanese attack on Pearl Harbor. The possibilities are endless.

THE FINAL COUNTDOWN (1980) is a film directed by Don Taylor and written by seven writers at least according to the imdb page and as we all know, that many hands on a script rarely heralds anything brilliant. The cast includes many actual U.S. Nimitz crew members and Kirk Douglas who is kind of wasted in an uninspired part as Matthew Yelland the bewildered captain of the U.S. Aircraft Carrier Nimitz. We also have James Farentino as Commander Richard Owens, Martin Sheen as Warren Lasky a Department of Defense trouble shooter who just happens to be on board, Ron O'Neal as Commander Dan Thurman and Katherine Ross as Laurel Scott assistant to Senator Samuel Chapman (Charles Durning). None of these competent actors really have much to do except react in various stages of befuddlement to the on-going on board crisis.

The Senator and his aid (and her dog) do not come aboard the Nimitz until 1941when their little beauty of a wooden yacht (mint condition) is blown out of the water by two Japanese Zeros on a reconnaissance mission. They are air lifted to safety by a Navy helicopter from the Nimitz. But not before an exciting air display by two 'modern day' jets buzzing around the Japanese planes and finally, annoyed, shooting them out of the air.

But wait, I'm getting ahead of myself as usual.

In between we're treated to scenes of thrilling flights and views of the wonderful job done by those charged with making sure planes land and take-off safely. There are few things as exhilarating as watching planes take off from an aircraft carrier - at least for me. This is my favorite part of the movie actually. I love all that military hullabaloo. Like most women (or at least women like me) I'm fascinated by the colorful (but orderly) display of military brawn, the nuts and bolts of an alien world - the rugged maleness of it. It's like viewing the workings of a secret club. Yeah, I know that now there are probably women serving on board these sorts of ships but this was then.

At first everyone assumes the on-coming vortex is just some violent storm unexpectedly headed their way though the on board weather equipment says all should be sunny and clear. Uh oh.

Long story short, as the aircraft carrier and crew find themselves back in 1941, they're called upon to pick up a couple of survivors of a Japanese air attack: a Senator and his aid (and her dog). The captain tries to keep these unexpected passengers from interacting with the crew or seeing the 'modern' equipment, but to no avail. Things go from bad to worse as no good deed goes unpunished: a very confused Japanese pilot found floating in the water clinging to wreckage - a survivor of the original attack on the woody yacht - is brought on board. Uh oh.

Once the captain and crew realize - finally - that they really, REALLY are back in 1941, the captain is, understandably, bent on attacking the planes and ships headed for Pearl Harbor even if he more or less understands the ramifications. His argument is this: He works for the U.S. Navy and he and his ship are charged with protecting the U.S. against aggression no matter what year it is. Makes sense to me.

But I don't have to tell you about time travel paradoxes and all that, we've read enough books featuring the 'what if you do or don't do this and that does or doesn't happen?'. We've watched enough Star Trek episodes.

In the end the movie cops out. Things are left undone (maybe for the best), questions are left unanswered and we get, instead, a quirky little smiley-face ending featuring James Farentino, Katherine Ross, Martin Sheen and Charlie the 40 year old dog.

So why am I bothering to talk about this movie if I'm so lukewarm about it? Well, I think it's because of what might have been - it's the sort of 'high concept' story that makes you think about possibilites. I keep imagining what better writing, a better cast and maybe Spielberg at the helm would have done with it. Plus let's not forget, there are those fabulous flying sequences.

And by the way, what is it about movies from the 70's and 80's? Everything always looks so cheesy. I lived through that time - it didn't seem so tacky back then.

Well, it's Tuesday and that means checking in with Todd Mason at his blog, Sweet Freedom, to see what other films, television and/or other audio-visuals, other bloggers are talking about today. We're a stellar bunch.