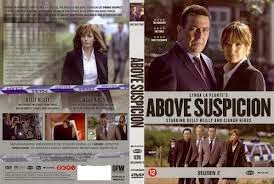 ABOVE SUSPICION is based on books by Lynda LaPlante who writes and is a producer on several of the shows. I will say this right off the bat: ABOVE SUSPICION is not a nice show. It's a very dark police procedural about unpleasant people doing extremely unpleasant things. Even the cops are hard to like although you do like them a smidgen better than the vile criminals who ply their odious trade in every episode. Who knew that England was such a hotbed of loathsome criminality?

Obviously the British cop system is all about politics and how to rise to the top by making less waves than the next guy. (Oh wait, that sounds familiar.) Of course catching the bad guys counts, but doing it as briskly and quietly as possible. At least, that's the impression I get - nobody likes bad press. Secrets are routinely swept away in order to keep things tidy.

I will say that the newspapers over there seem to screech louder than ours and a juicy crime screams loudest. 'If it bleeds, it leads,' that sort of thing. There's also not a lot of comfort to offer the victims of these assorted crimes.

The episodes I've watched (Netflix DVDs) reveal some pretty repellent crimes in pretty repellent detail. So keep that in mind. I don't, normally, go in for this sort of thing but I admit that there's something repulsively compelling about the show. Probably the cast. Not that they're repulsive. Not really. 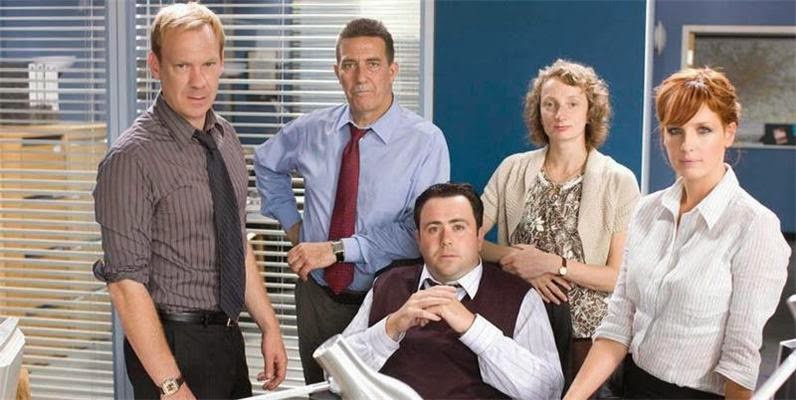 As is usual in most Brit shows, the entire cast is pretty top notch and most of them look viable as detectives and so forth. The villains are also extremely well cast, most especially Simon Williams (who is still a handsome devil) of Upstairs Downstairs fame as a rather dreadfully creepy bad guy.

You know my affection for Ciarin Hinds, the Irish actor whom I go into rhapsodies over every now and then. Well, he's the star here although Kelly Reilly is supposed to be. He plays DCI James Langton, an over-whelming type-A personality who comes onto a case short-tempered and larger than life, aggressively ready to stampede over everyone and anyone in the interests of catching the bad guy and advancing his career. He's the best thing in the show.

Kelly Reilly plays red-head DC Anna Travis, a trainee who must prove her mettle. She is beautiful (of course) and goes in for high heels even when she has to traipse through the mud (?!) or hit the rutted back of beyond farm roads where one can't help feeling uncomfortable for her poor feet. It is, I admit, distracting. She also appears to only have one suit of clothing. But I'm digressing.

DC Anna is one of those intuitive detectives who seems destined for great things if only she can stop making stupid mistakes like sleeping with a newspaper reporter who goes through her case notes (in her pocket book!!!) while Anna has a post-coital snooze. Needless to say, she wakes up to find secrets of the current case splashed all over the front page of the tabloids. Lucky to still have a job she's forced to apologize to everyone down at headquarters for her ridiculous stupidity.

And by the way can someone please comb this woman's hair? Anna has a habit of looking as if she just rolled out of bed, hair usually dangling in her face. She also needs to buy some boots. And a couple of more work suits wouldn't hurt. 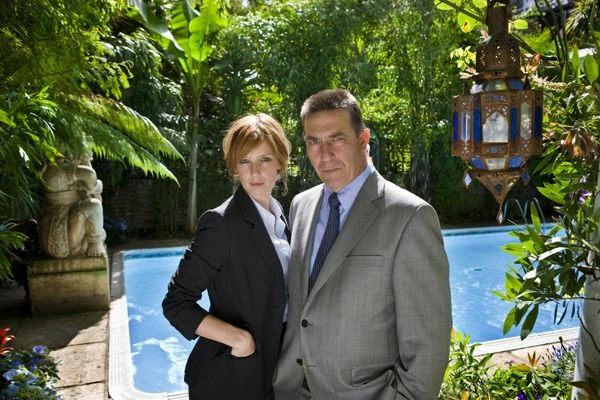 In the meantime, the beautiful Anna (despite her mess of a hair-do and limited wardrobe) has caught the eye of DCI Langton, though he is currently having a secret thing with his boss, a woman more in tune with his age and personality. Langton, to his credit, makes no move on Anna. It's all very nebulous. But we're given to understand that beneath the surface, attraction is briskly simmering away. Not that much is done about it. It's one of those either/or things. Of course I haven't seen the last episodes in the series which, I understand was cancelled in 2012.

Everyone who works down at police headquarters is unhappy. Did I mention that? Well, that's hardly a surprise considering the job stress and the rotten crimes that fall to their division to solve. But funnily enough, you do get inured to the violence after the first couple of shocks. At least that's how it worked for me. Oh, and the language, too. The F-word is fairly flung around, so there's that to consider as well.

On the whole, I recommend the show with the obvious cautions mentioned above.Which just goes to show that I must be a real Ciarin Hinds fan-girl.

Since this is Tuesday, don't forget to check in at Todd Mason's blog, Sweet Freedom, to see what other forgotten (or overlooked) films, television or other audio/visuals, other bloggers are talking about today.
Posted by Yvette at 4:00 PM