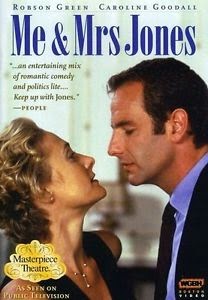 This is a Masterpiece Theater 'film' from 2002 directed by Catherine Morshead, written by Caleb Ranson and hosted by Russell Baker who immediately informs us that ME AND MRS. JONES is nothing less (or more) than a 'fairy tale', going on to explain why. (In case we couldn't figure it out for ourselves.) Nothing wrong with fairy tales I always say. Especially one as delicious as this one. The Brits are so good at this sort of light-hearted fare. And as always, the casting is impeccable. 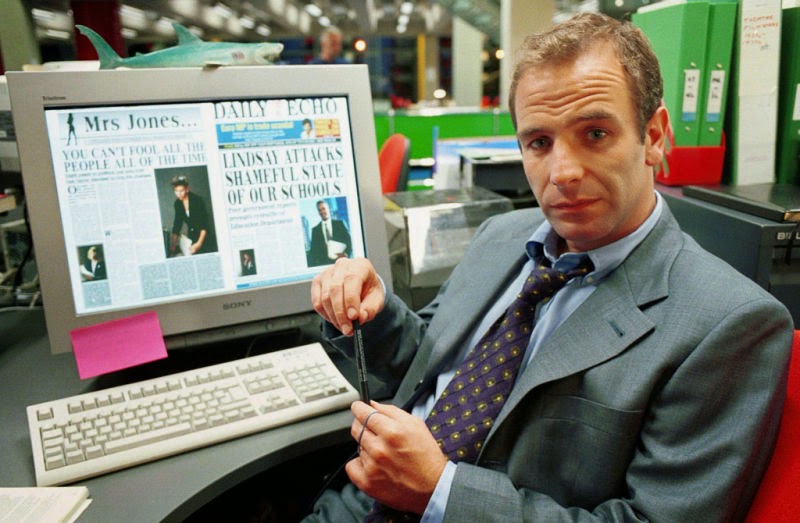 I'm a fan of the actor Robson Green - he of the curiously saggy-sexy face, flat voice and direct approach, who nonetheless makes a woman sigh in anticipation. At least he does me.

And he does the Prime Minister, Laura Bowden (Caroline Goodall who manages to link that fine line between vulnerable woman and aggressive world leader) when first she sets eyes on him at a government function/tea party at Number 10 Downing. Of course she's married and has two children as well as being the P.M. caught up in a fierce election. But she's also young enough to feel the stirrings of inconvenient lust.

Oddly enough, in reality, Green is the host of some sort of Extreme Fishing (?) Show in England, while at the same time pursuing his day job of sexy, hard-boiled actor. Go figure.

Anyway, here, Robson Green plays reporter (and would-be novelist) Liam Marple otherwise known as Mrs. Jones (a kind of Page Six gossip chronicler) always on the look-out for the next juicy headline. Since it happens to be six weeks before another party election and the current P.M. Laura Bowden's chances look 'iffy', Liam is assigned (by his boss who also happens to be his ex-live-in girlfriend or maybe his ex-wife) to rake up some dirt on the P.M. Though politics are not his usual beat, Liam relishes the idea of a front page byline and takes on the assignment.

Cunning and intuitive, Liam immediately gets himself invited to a 'fete' at Number 10 Downing Street thanks to a malleable friend, Ivan McDermott (the oh-so-wonderful and dependable Michael Maloney) who happens to be a party fund-raiser. 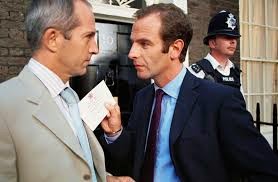 Once inside the P.M.'s offices, Liam promptly plants a tape recorder in a conference room. (Where on earth is the vaunted British security one might ask - out to lunch, one might answer. But don't forget this is a fairy tale.) He then makes a show of 'blending' in with the rest of the guests, pretending to be just another money man. 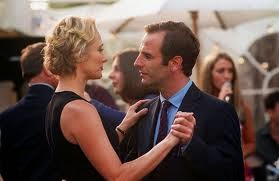 In the meantime, there's tea and dancing on the terrace and wouldn't you know it - the P.M. is a bit restless and in the mood to dance so that when Liam seizes his chance, she is intrigued enough to say yes. And by the end of the dance, you can tell that some serious sizzle has been set in motion by the intent expressions on the P.M. and the reporter. So much so that everyone around them is wondering who Liam is and what the heck is the P.M. doing dancing with him. Not the least of which is her bemused hubby (Philip Quast) who we later learn has his own personal agenda which includes spending a heck of a lot of time working late at the office. Uh-oh.

This is the sort of story in which London at night looks softly romantic (there's even a ride on that big Milennium Ferris Wheel) and everything works out as expected (more or less), the rocky but politically accommodating marriage of the P.M. and her hubby is explained - not especially dense hints are dropped along the way - and true love is allowed to triumph. In the end even the adorably hapless Ivan gets a chance at love, as he dances with Max (Aisling O'Sullivan), the P.M.'s very tall (but sternly attractive) female bodyguard.

Needless to say, the P.M. wins her election, given a chance by the electorate to prove herself despite family scandal published by the new Mrs. Jones reporter (a sleazy, sweaty, beefy guy with less scruples than the love-stricken Liam.) And last but not least, Liam writes a best-seller.

A very nice way to spend a couple of hours. I love a good romance.

Since this is Tuesday, don't forget to check in at Todd Mason's blog, Sweet Freedom, to see what other sorts of films and/or television and/or audio/visuals, other bloggers are talking about today. We're an esoterically inclined bunch.