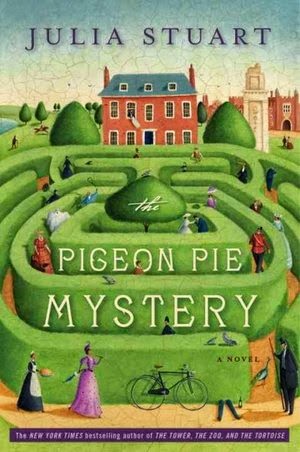 Love the design by John Fontana and cover art by Alison Jay.

I zipped through this engaging historical mystery, one of those books that you take a chance on because of the enticing cover-art and the warmth of a few online reviews. I'd never read anything by Jill Stuart before.

Though I did still take a look at the first page on amazon just to see whether or not the writing made me wince. I'm not really happy with a lot of what passes for 'cozy' these days: too mechanized, too forced, too precious - know what I mean?

Anyway, Jill Stuart is none of these things. Thank goodness.

THE PIGEON PIE MYSTERY by Julia Stuart takes place in Victorian England, in a setting I was not at all familiar with: the vast palace grounds of Hampton Court where the Queen (at her discretion) can offer what is termed 'grace and favor' homes to impoverished gentle-ladies, widows and the like. I'd never heard of this before. Needless to say, it turns out to be the perfect setting for a murder mystery.

Faced with no other choice but to accept the Queen's largess is the newly penniless Princess Alexandrina (nick-named Mink) of Prindur, who, upon the (very) scandalous death of her father, the Majarajah, finds herself not only grief-stricken but destitute and out on her ear, forced to sell her home and worldly goods to pay off her father's mountain of debts. Never one used to economizing, it's a brand new world for the beautiful Princess (born in India, but raised in England), who, nevertheless, is determined to make a life for herself. So she and her devoted but oddly agitated servant, the large-footed Pooki (who spots ghosts and goblins in every shadow of their new abode) reluctantly move into a dark and uncomfortable residence rumored to be haunted.

I know, I know, it all sounds too precious and cute, but believe me it isn't. Julia Stuart is clever and talented, she knows how to handle the permutations of this sort of tale, never once straying into the wasteland of cute for cute's sake.

Being the object of choice gossip doesn't bother the Princess in the slightest and soon she is befriended (out of curiosity more than anything else) by three eccentric elderly widows who take it upon themselves to spread the latest on dits and to warn the Princess against the various pitfalls of 'grace and favor' living. Speaking of 'pitfalls', they will soon witness a death, that of the loathsome and very married Lothario, Major-General George Bagshot - he of the roving eyes and hands.

Unfortunately, the Major-General dies after eating copious amounts of Pooki's specialty: pigeon pie. So when suspicion immediately centers on her servant, it's up to Mink to save not only the only person left over from her old life of royal luxury, but the only person left who still cares about the Princess at all. Speed is of the essence since the Queen is in favor of a quick and tidy outcome. One can't have servants poisoning residents after all.

The denouement, by the way, is a surprise, both for the culprit and the murder method. Not so much the motive.

The real enchantment of this tale lies in Julia Stuart's creation of a colorfully insular world filled with an odd assortment of quirky characters. Among them: the Honorable Dowager Lady Montfort Bebb, the Lady Beatrice Fisher, the Countess of Bessington, William Sheepshanks, the Keeper of the Maze, Mr. Blood the undertaker, Inspector Guppy, the local arm of the law, Thomas Trout, the Keeper of the Great Vine, the Organ Grinder paid by the public to keep quiet, Albert, the Majarahah's monkey resplendent in a red velvet suit, Victoria the hedgehog (brought in to make a feast of the thousands of black beetles which crawl about the Princess's residence - ugh!) and so on and so forth.

It's a delightful, if slightly off-beat world of misfits and eccentrics, among them my favorite character in the book: the hapless Doctor Henderson, bicycling enthusiast and love-struck physician given to bad hair days. He is smitten by the Princess and bent on impressing her if only he could.

It's the quietly awkward love story that wins the day, at least as far as I'm concerned. I was struck with charm and left hoping for a second book featuring these same endearing characters.

Even if you're not a fan of 'cozy', this book will win you over.