Tuesday's Forgotten (or Overlooked) Audio: FROM LONDON FAR audio book / THE MAN FROM THE SEA audio book - Both by Michael Innes

And now for something a little different. I normally do a visuals post for Tuesday's Forgotten (or Overlooked) Films, Television and/or other Audio/Visuals meme over at Todd Mason's blog, Sweet Freedom, but today I'm touting audio.Two audio books to be precise. I don't know about you, but I love books on tape (as we used to call them once upon a time) - I love being read to. I used to listen to tapes and CDs in my car, but now I listen on my computer. If, like me, you love the sound of the English language, then audio books are the way to go. I do tend to concentrate on books set specifically in England or Scotland, but that's just my own quirk. 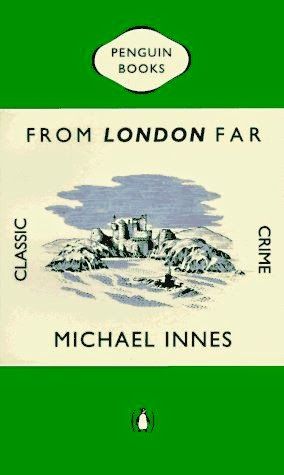 Keeble does a superb job of narrating this episode in outrageousness by Michael Innes, one of my favorite Golden Age (sort of) authors. While this is my first experience 'listening' to Innes, I have read many of his Inspector Appleby books, falling immediately under the Innes spell with my first one, THE SECRET VANGUARD (which, by the way, remains my very favorite).

At any rate, FROM LONDON FAR is not an Appleby book, but here's the thing, you don't miss the urbane police inspector at all.

The resourceful Richard Meredith, an elderly scholar musing on various bits of poetry as he enters a tobacco shop, is suddenly thrust into a rip-roaring adventure involving art theft on the grandest of scales. The setting is England and Scotland just after WWII.

This is very much an Alice in Wonderland sort of story in which the unlikeliest of heroes falls through a hole (more or less) in the floor and straight into a game of danger and pretense. Meredith, heretofore, a quiet academic type, must keep his wits about him lest he, at any point in the story, be immediately killed. He will shortly also have to contend with a young woman caught up in the same surreal out of control events.

Now some people may cavil at the sheer lunacy of the plot and in listening to the words, I can well see that perhaps, reading the volume of zips and zags as well as the volume of thoughts (both conjecture and literary musings with bits of art history thrown in) that catapult through Meredith's brain might make for a few difficulties. But listening to narrator Jonathan Keeble zip right along in his precise English (and later in the story in various accents including Scottish, American and Italian) is utterly spell-binding. I could have gone on listening for hours and hours more.

Yes, there's lots of extraneous meanderings - you have to expect that with Michael Innes, he's really like no other thriller writer - and for part of the story you have to wonder if you've wandered afar and into a different book, but once you get the hang of it, it's all perfectly wonderful and very, very English. Thanks to Jonathan Keeble's vocal agility and facility with language, the entire farcical enterprise begins to make some sort of insane sense. My personal conjecture: Listening rather then just ruminating in your own brain seems to help this sort of story along.

As events barrel forward, picking up speed, there's nothing for it but to hang on. The uproarious finish, when it comes, is so absurd, so ludicrous, so damned brilliant, that it somehow works as outlandish burlesque, if nothing else. Does Innes lose control of the story? Yeah, just a little bit, but believe me, I didn't mind in the slightest. I'm always willing to believe six impossible things before breakfast. 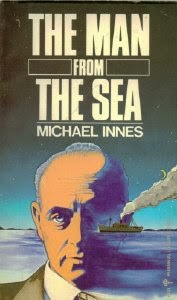 2) THE MAN FROM THE SEA (1955) by Michael Innes, narrated by Daniel Philpott

Philpott is equally superb in bringing another Innes boys own tale to vivid life and has no problem handling whatever accent is required. I especially loved his Scottish brogue.

The man from the sea in the title is the infamous John Day, a British atomic scientist who'd defected to the Russians years before. The seemingly repentent turncoat has washed up naked on a Scottish beach and into the life of twenty two year old university chap (and son of the local doctor) Richard Cranston, who until a few minutes ago was happily cavorting with Lady Blair, his married mistress. She's just run off to hide in the rocks as part of their nightly hide and seek routine.

Being one of the exceptional sort of intelligent young men (even if a bit callow) who populate Michael Innes' storybook world, Cranston is almost immediately drawn into a cloak and dagger escapade. Soon he is on the run (with a temporarily blinded Day in tow, as well as a couple of adventuresome friends - one an amazonian cousin from Australia newly arrived in Scotland for a family visit) from sinister Russian agents who will stop at nothing to get their hands on Day who, in turn, is bent on getting to London even if the odds against the little band seem insurmountable.

Why is Dick Cranston helping a traitor?

You'll have to listen and/or read to find out.

This is an Innes tale that begins briskly enough then picks up speed. (I had to take a couple of tension breaks while listening.) There is chicanery galore and hairbreadth escapes across the Scottish moors by ambulance, on foot and by hearse, it's the kind of reckless romantic stunt that any of us might want to get involved in while still young enough to - hopefully - live through it all.

Despite it's outlandishness, Innes does manage to make the whole thing heart-stoppingly plausible, at least, so far. I'm still listening to the story so haven't reached the ending. What happens next I cannot say.

I'm having a lovely time.

To read about Michael Innes and for a list of all the author's books, please use this link to Fantastic Fiction.
Posted by Yvette at 10:00 AM

Email ThisBlogThis!Share to TwitterShare to FacebookShare to Pinterest
Labels: Daniel Philpott, From London Far, Jonathan Keeble, Michael Innes, The Man From the Sea