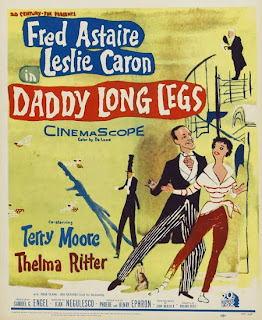 Let me say going in that I've never found Leslie Caron a scintillating screen presence except for maybe, in GIGI. So there's that to consider. But I can see Fred falling for her French bubbly effervescence - why not. He's an old guy, she's young and vibrant. There's that accent AND she really, really knows how to dance. Plus she's awfully cute. What more could any man want?

And I know that there are MANY people who think Fred was just too old for this role - I've even heard that some people find the whole thing creepy. I don't, but then far as I'm concerned Fred was ageless. But let's not dwell on the reality, ladies and gents. This is a movie. A musical. In Technicolor. It's Fred Astaire. Honestly, who cares how old he really was? It's make-believe!

I'll tell you a secret, I found Gene Kelly much more objectionable (age-wise) opposite Caron in AN AMERICAN IN PARIS. But that's just me. 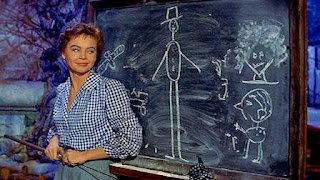 DADDY LONG-LEGS (1955) is a film directed by Jean Negulesco with a screenplay by Phoebe Ephron and Henry Ephron based on the wonderful (maybe even legendary) epistolary novel of the same name by Jean Webster. Read more about that version on my earlier blog post here.

As with most adaptations of novels, the movie takes liberties, but that's to be expected. For instance, in the book, the young American waif is named Jerusha 'Judy' Abbott. But since Caron is so obviously French, her name was changed to Julie Andre and she becomes a waif in an orphanage in the French countryside.

Traveling in France, Jervis Pendleton III (Fred Astaire) a fabulously wealthy businessman, stops off at an orphanage which he sponsors. He spots a charming young girl, Julie Anders (Leslie Caron) and decides to underwrite her education in the states. To that end, Julie shortly gets shipped off to a college in New England where her roommate and friend will be (coincidentally) Jervis's niece, Linda (Terry Moore). (Not that Julie knows about the family connection. She has no idea that Jervis is 'her' Daddy Long-Legs.)

You know how girls's colleges were depicted in movies once upon a time: fun, fun, and more fun. Sweater-sets, plaid skirts, saddle shoes, singing, dancing, the students all perky and bright-eyed and looking to connect with husband material. (There's a male college conveniently near by.)

At the orphanage, Julie's only glimpse of Jervis had been of his shadow - just enough to capture her imagination. He is tall and thin with long legs, hence the moniker 'Daddy Long-Legs'. But she is told by the orphanage administrator that she and her benefactor will never meet, that is one of the scholarship's provisos.

Jervis worries that if anyone found out he was sponsoring a lovely young girl, gossip might be hurtful not only to her but to his corporate dealings - Jervis is a hard headed business man first and foremost. He has no interest in friendship with his new ward. In fact, before too long he forgets about her.

Julie, however, has been told she must write to her mysterious sponsor and let him know of her life at school but she must not expect any replies to her letters. Huh?

I don't know about you, but that seems just the teensiest bit off-putting to me. But hey, she's getting a scholarship and a chance to have a better life, so why not. Besides she doesn't really believe he actually means not to respond to her letters.

But as the years pass and she writes her 'Dear Daddy Long-Legs' letters to Jervis - letters which he doesn't even bother to open - she finally realizes that her guardian did, indeed, mean what he said. Though that doesn't stop her continuing to write and unburdening herself to him. She is, after all, very grateful for this chance at a new life, not to mention his continued generosity.

When over time Jervis's gruff secretary, Alicia Pritchard (the wonderful Thelma Ritter) reads some of Julie's letters, she is so touched, she begins to chide her boss for not responding. Even Jervis's equally gruff associate Griggs (the equally wonderful Fred Clark), eventually gets in on the notion. Life is more than just about business, Miss Pritchard insists, to Jervis's surprise. Really? At the very least, he decides to read a letter or two.

Despite his inclination to keep ignoring the young girl he's uprooted and installed in a state-side school, Jervis decides - finally - to check up on her. Yes, he is touched by her letters too. He will drop in at the school to visit his niece Linda never admitting to Julie - whom he meets and is again enchanted by (in the way that only a younger woman seems able to enchant an older man) - who he really is. 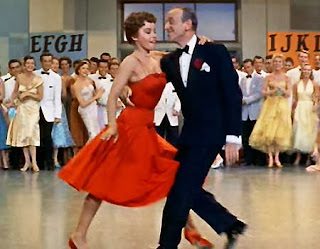 Once they dance together (Sluefoot!), of course, it's all over but the wedding invitations. But that's a little later in the story. First Julie and Linda (who can easily see that her uncle dotes on Julie) travel to NYC on school break while Jervis tries to figure out how to tell Julie who is and Julie, smart girl that she is, begins to suspect.

It's all happily ever after of course, and even if we all know (including Jervis) that he's too old for Julie, it doesn't seem to matter much - love will find a way. It's only thirty or so years difference after all. 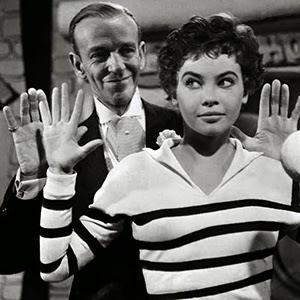 Several terrific songs and dances later, all's well that ends well. You know how that goes.

Don't forget to check in at Todd Mason's site, Sweet Freedom, to see what other films and/or audio visuals other bloggers are talking about today.
Posted by Yvette at 1:53 PM