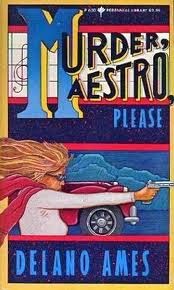 Before you run screaming out the door, I really am trying to curb my crush on Delano Ames' books (and obviously not succeeding very well). But I promise that this is the last one for awhile. It's getting harder to locate Ames' books online especially when you don't want to pay big bucks. But mostly it's because they're just not available. Oh how I wish someone/anyone, would reprint the entire Jane and Dagobert series.

MURDER, MAESTRO, PLEASE (1952) is another 'let's take a holiday with Jane and Dagobert' book - honestly, do these folks ever stay home? Nah, then we wouldn't have all these murderously fun adventures to read.

This time the amateur sleuths are traveling in the Pyrenees area between Spain and France when suddenly they're shot at - a nice way to begin a couple of weeks off. They're supposed to meet up with a cousin of Dagobert's, a young woman traveling with mutual friends - one a long ago school pal of Jane's - and all will be attending a slightly off the beaten path music festival.

But back to the shots which have momentarily caused a crimp in Jane and Dagobert's forward motion.

"We were as a bird (or a bullet) flies, very near the frontier of Andorra where, according to the guidebook, it is the 'inalienable right' of every adult male to carry firearms. On the slopes of the Pic des Quatre Vents they shoot the isard. It was out of season, but we had had an exquisite civet d'isard for dinner last night. It is a shy animal, difficult to shoot. Doubtless you stalked it in the dense fog.

Then there were smugglers. Probably the frontier people fired at smugglers from time to time. In brief, there a dozen satisfactory explanations. I wished I could think of one.

Dagobert had been pursuing a different line of speculation.

"I was wondering, " he said, "what mortal enemies we have made in the neighborhood."

"Don't..." my voice rose, but immediately sank to a controlled croak, "say things like that. This is supposed to be a holiday."

He picked me sympathetically out of the ditch and dusted me off. "You don't like the idea of mysterious assaults on our life?"

"Sinister attempts to make us abandon our project?"

"I wouldn't mind those so much," I admitted.

Our 'project' was to reach Puig d'Aze on a tandem bicycle via Andorra and the less accessible regions of the Eastern Pyrenees; I was quite willing to abandon this project on the spot. It had been formed four evenings ago at the Cafe de la Gare in Perpignan when the question of how to get to Puig d'Aze had first become acute.

There is, of course, a train and a regular bus service, but Dagobert had been reading a guidebook which was written before these things existed. It was full of maps showing mule paths. I had seen him gazing at the shop window next door which displayed hobnailed boots, steel-tipped sticks, campers' and cyclists' equipment. Recognizing the far-away look in his eye, I said quickly:

"There's a place down the road with motor-cars for hire."

Before you know it, Jane and Dagobert are honorary life members of the Club du Cyclisme des Pyrenees Orientale  and riding away on a tandem bike built for two, making their decidedly not uneventful way to their destination.

Once in Puig d'Aze, they (and we) meet up (at various times) with the usual (but very welcome) Delano Ames cast of colorful characters which, this time, include:

Perdita, Dagobert's cousin-by-marriage, a lovely, limpid girl for whom Dagobert assumes a natural family responsibility. She is newly engaged to:

Squadron Leader Johnny Corcoran, a famed test pilot and dashing man about Europe who, in turn, has his roving eye on any female within his immediate radius. He and Naomi appear to have a secret. Uh-oh.

Tyler Sherman, an American from Texas with a drawl and a suspicious way of popping in and out when least expected. He has his eye on the lovely Perdita and he may or may not be a spy.

Vicky Stein, a young and prickly foreign woman of impoverished circumstances who is harboring secrets and obviously lying through her teeth. She may or may not be a spy.

Mitzi Stein, her even younger, likable and rather precocious, protective sister who is apparently, a bit of a prodigy. She too may or may not be a spy.

Fred Evans, another suspicious type - British this time - who claims to be a newspaper reporter - excuse me, 'roving correspondent'. He may or may not be a spy.

Last but not least, there's the hard drinking, oh-so-eccentric master of the harpsichord, Kitson, a loud, bushy-bearded slovenly type in a plum dinner jacket who is the sole reason for the Puig d'Aze Music Festival. At the first concert he plays nothing that is on the official program to the confusion of the invited audience.

Of course when Jane and Dagobert show up anyplace and at any time - can murder be far behind?

MURDER, MAESTRO, PLEASE is simply another in the wonderful Delano Ames' repetoire of books bound to please.

Don't forget to check in at Patti Abbott's blog, Pattinase, to see what other Forgotten (or Overlooked) Books other bloggers are talking about today.

Oh, a note to those of you who may not be too familiar with the area of the world in which Jane and Dagobert find themselves this time out.

Traveling by motorcars from Puig over the border into Andorra:

We found a picnic spot about an hour later and waited until Tyler, who had been giving a driving lesson to Perdita, caught up with us. It was a green valley thick with wild narcissus, a few miles before the village of Adorre-la-Vielle, the capital of the republic. (It isn't quite a republic, but since 1278 a fief owning feudal allegiance to two co-princes who are the Spanish Bishop of Urgel and the French Assemblee Nationale. It is very complicated and doubtless fascinating, but details of 'viguiers and bayles' as Dagobert explained them to us during the picnic fortunately slip my - and his - memory.)