Friday's Forgotten (or Overlooked) Book: MURDER ON THE BLACKBOARD (1932) by Stuart Palmer 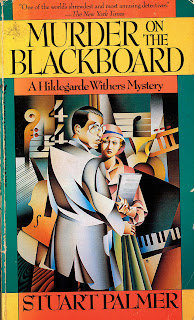 This is the first Miss Withers mystery I've read - or at least that's what memory tells me. Many thanks go out to my good blogging friend Bev at My Reader's Block for her generosity in making the book available to me.

Amateur sleuth Hildegarde Withers is a 'spinster' school teacher with a devious mind - perfect for solving crimes - and a take no prisoners attitude. The children in her charge tremble before her acerbic wit and 'rules are rules' form of teaching - nothing gets by this eagle-eyed lady of a certain age.

Miss Withers also happens to be the smartest detective in New York although she is not a member of the NYC police department. She is an amateur who likes to stick her nose into crime when she gets a chance. And since her best friend happens to be curmudgeonly Detective Inspector Oscar Piper of the NYPD, she gets more chances than most. It is an odd coincidence, but murder just seems to happen in the vicinity of Hildegarde Withers and she is only too eager to solve the mystery, with Inspector Piper along for the ride of course.

This time out, it's murder in the school room when a young teacher is killed in class after hours and Miss Withers stumbles across the body. But by the time Piper and the cops appear, the corpse has vanished. Since Withers was watching the only viable entrance, she reasons that the killer must still be hiding inside and the search begins.

Who knew that a school building after hours could be so sinister? The author has a knack for making an everyday building usually full of teachers and chattering kids, seem dark and menacing, a nice macabre touch.

Hardly has the search been concluded when in the school's basement, Inspector Piper is knocked out with a shovel and must be rushed to the hospital in critical condition. Miss Withers is left on her own (surrounded by inefficient cops) to hunt for clues and solve the mystery.

But the wily killer has apparently escaped through a fire exit (setting off the alarm) after further search in the basement turns up the charred remains of a body in the school's furnace. The janitor, found drunk in the dark recesses of that same basement, seems the most likely suspect (despite the fire alarm). But Miss Withers is doubtful.

There are many questions and no easy answers. As the back cover on my vintage paperback states:

What does the music scrawled on the blackboard mean?

Where was the murdered woman getting her scotch?

Why is her roommate hiding a pistol?

Why was the janitor not found during the first search of the school building?

Who set off the fire alarm?

What about that surly guy running a candy store across the street?

Whose body is it in the furnace?

What about that Irish Sweepstakes ticket?

Where is the missing shoe?

Will the hapless young cop find true love with one of the suspects?

There are many red herrings to wade through in this cozy but fast-paced whodunit, since the author seems inordinately fond of leading the reader up the garden path. No real 'fair play' here, as a couple of the clues are not explained well enough so that they make real sense. But in the end, most all is revealed - in the great tradition of the Golden Age mystery - by Miss Withers, to the required roomful of suspects.

By the way, my vintage copy of the book features the same cover as depicted in this post. Fabulous artwork by John Jinks has the look of the very stylized painter Tamara de Lempicka (1898 - 1980).

MURDER ON THE BLACKBOARD was the second of three Hildegarde Withers books turned into films starring Edna May Oliver as Miss Withers and James Gleason as Oscar Piper.

Edna May Oliver as Hildegarde Withers

Don't forget to check in at Patti Abbott's blog, Pattinase, to see what other forgotten (or overlooked) books other bloggers are talking about. Today is Ross MacDonald Day over there - something I hadn't realized, so there are lots of Lew Archer books to read about. My favorite Archer: THE GALTON CASE. But I enjoyed them all. You can't go wrong with Ross MacDonald. Especially if you like hard-boiled detectives with heart.