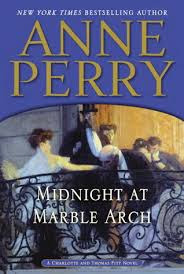 I've read Anne Perry's Charlotte and Thomas Pitt series from the beginning, many MANY books and years ago. MIDNIGHT AT MARBLE ARCH is evidence that the prolific Perry is still writing at her very best.

Victorian malice and foul murder are alive and well in Perry's latest trip to the dark and foggy London of the past. It is 1896 and the city is abuzz as the possibility of a second Boer War draws closer and events in Africa reach out to touch the financial machinations of the very rich.

But events closer to home have brought Thomas and Charlotte Pitt into a strange murder case involving one of society's own.

This is a London in which the upper crust keeps its eyes closed to sexual violence, conspiring to avert scandal even as it pertains to one of their own. When a young girl dives to her death through a window in full view of a frivolous afternoon party and no one is inclined or fast enough to think to save her, you know that these are the sorts of people one had better best avoid.

Since ex-policeman Thomas Pitt was promoted to Head of Special Branch, it is his duty to mingle with 'his betters' even if the effort often fills him with unease and distaste. Author Anne Perry is excellent at probing the fine points of upper class misbehavior and the often extreme levels to which the powerful will go to prevent any tarnish of scandal.

Pitt was not 'well born', but his wife Charlotte was - though she has never regretted marrying policeman Thomas. They've lived a frugal life until the recent promotions which have made the honest and honorable Pitt a rather powerful man, though with few friends in high places and many rancorous enemies. This we've learned over the course of many books in this long-running series.

Before the tragic events of a ghastly afternoon in which the Portuguese Ambassador's sixteen year old daughter is tragically driven to her death, there is another event just as ghastly: the brutal rape and murder of the wife of society banker Rawdon Quixwood. Almost immediately gossip begins blaming Quixwood's lady wife for the violence done her late at night in her own home, especially when it appears she opened the front door to her assailant. When later the coroner states that the lady apparently committed suicide by drinking poison - after the rape - speculation turns feverish.

In Victorian society (as in many others), rape was almost always seen as the 'fault' of the victim. The truth was rarely disclosed as everyone concerned looked the other way and refused - in most cases - to speak to the police. That didn't stop the gossips, though, from destroying the victim's reputation. In a society where women were either ladies or whores, the result wasn't very pretty and justice was often the loser.

Since matters at first appear to be out of the official reach of Special Branch, it falls to Victor Narroway (Lord Narroway) to quietly assist in the investigation of Catherine Quixwood's death - especially since the victim's husband has requested his help. Narroway is a friend of Thomas Pitt and as the retired ex-head of Special Branch, he is in a unique position to dig around informally behind the scenes. In this he is helped by the wise council of his old friend, Charlotte's elegant 'great-aunt' Lady Vespasia Cummings-Gould. The low-key affection between Narroway and Lady Vespasia is one of the pleasures of reading these books.

Eventually it becomes apparent that a serial rapist and murderer is at work in London and although we know fairly early who this might be, there are still many unanswered questions. But when in a dramatic turn of events, a suspect is arrested and put on trial for Catherine Quixwood's brutal assault, as far as society is concerned the case is closed.

The sensational trial that ensues is one of Anne Perry's finest set pieces - something she is especially gifted at creating.

But Narroway and Pitt are not satisfied that the right man is in the dock. (Pitt became involved when the case of the Portuguese Ambassador's daughter was linked to the Quixwood assault. Special Branch has a right to investigate officially when matters of state might be involved.) As the search for clues continues in a frantic race against time, the twisted truth when finally pieced together, is even uglier than first suspected.

Another extremely satisfying tale from the doyenne of Victorian mystery.