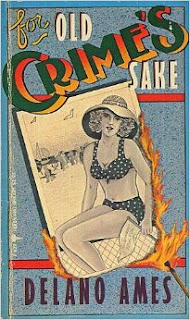 Yes, yes, I know I've been lauding Delano Ames lately as the next best thing to chocolate, but bear with me. I'm smitten. I must laud while the lauding is good.

FOR OLD CRIME'S SAKE published in 1959 is yet another delightful vacation book - another wild and wacky holiday with those insouciant amateur detectives Dagobert and Jane Brown. This time we're off to Tabarca (?!) a small island in the Mediterranean where a grumbling Jane has won (with Dagobert's help) an all expenses (more or less) paid trip.

Jane's grumbling is the result of her reluctance to go anywhere near Tabarca. To her, the whole escorted trip in the company of six other contest winners and an officiously jovial host (sort of like a sheep-herder, but with people) who refers to himself in the third person, sounds like a nightmare.

Turns out Jane was right.

But let's back up a bit. We open in London where Dagobert and Jane are, as usual, discussing economics.

'Dagobert was deeply moved when my premium bond drew a fifty-pound bonus. Money so simply come by opened up new vistas. Far too many people, he decided, underrate money; and to acquire more of it momentarily displaced his current passion for Mudejar architecture.

Knowing my husband's aptitude for getting what he wants, I stirred expectantly. He grew pensive, giving the problem fuller consideration. In an effort to be helpful I said that some people made money by going to work. Dagobert who is always open to fresh ideas at once went out and bought the morning papers.

I plied him with coffee as he ran a hopeful eye down the Situations Vacant column.

"There are all sorts of things," he said in surprise. "The Government of Nigeria, for instance, is looking for a driller. Or, nearer home in Slough, Tracers and Estimators are urgently required. Bee-keepers...no, it's book-keepers. Coffin maker...

He turned the page before I could see it. 'We mustn't rush these things," he said, feeling that enough had been done for one morning. "It may take a day or two."

As these sorts of things will, the aforementioned fifty pounds detours into a 'let's take a trip' mode. But fifty pounds isn't much when gamboling abroad. Dagobert's new idea is that he and Jane should enter numerous competitions (contests) and win themselves a trip or two or at the very least 'double their income' (as a contest in The Daily Sketch promises). Soon Dagobert is furiously 'at work' signing up for as many competitions as he can find while Jane goes out to buy new shoes.

When I returned late that afternoon, he was still hard at it. The place was strewn with magazines and papers. He had forgotten lunch and smoked two packets of cigarettes. He had worked out that by winning, say, only a quarter of the competitions he had already entered our earnings would be in the region of a hundred thousand pounds.

I know what you're thinking, but all is not lost. They do, improbably, win the Grand Prize offering of a trip to the island of Tabarca, Europe's tiniest Principality. (Or at least Jane wins the contest. Dagobert forged her name on the entry since obviously, he couldn't enter everything under his own name.)

According to the newspapers, Tabarca has recently been bought (along with all feudal rights) by Henry Howard Hutton Jr. a 'pulled up by his bootstraps' millionaire; the island will be the setting for his lavish wedding to Princess Juana of royal Tabarcan lineage.

In fact, the contest has been spawned - as a way of promoting the island paradise and attracting publicity and tourist dollars - by 'Home Truth' a local gossip rag, controlling interest recently purchased by Hutton Jr.

Jane doesn't want to go. She is non-plussed at being chosen one of the 'Lucky Seven' contest winners. (An assorted motley group.) The trip doesn't sound like her sort of thing at all. Especially since it means leaving Dagobert behind (no spouses allowed) to the tender mercies of a married neighbor with an eager eye and the same egregious taste in music.

But 'but me no buts', Jane is soon off to Tabarca.

Following the storm-tossed, choppy-waved channel crossing from hell - everyone is agonizingly sea sick and relegated to their cubby-hole cabins - the Lucky Seven discover that they are one contest winner short. They are now the 'lucky' six, one of them has disappeared. But their tour guide Bobby Marcovitch, after an initial panic attack, insists that the disappearance shouldn't throw a damper on the proceedings.

The rest of the trip goes downhill from there.

But with Dagobert and Jane, there's never a dull moment as mistaken identities, red herrings, murder, blackmail. revenge, a broken engagement, not to mention the threat of capital punishment by hanging, add their own flavor to a murderously boisterous Mediterranean holiday, culminating in enough over-the-top Tabarcan island festivities to rival the royal wedding in Monaco. Phew!

Oh yes, Dagobert catches up to Jane, not to worry. My favorite moment in the book is when the group (the women wearing borrowed mink coats - a perk for the trip only - supplied by the contest host)  is driven to their hotel (before embarking on a boat to the actual island) and Jane glances out the car window. She spies a motorcycle following them and without any hint of a qualm, she realizes that - somehow - it's Dagobert all the way from London. She pretends not to notice.

I hate to use the word 'romp' but this is exactly what Delano Ames delivers in FOR OLD CRIME'S SAKE.

Don't forget to check in at Patti Abbott's blog, Pattinase, to see what other Forgotten (or Overlooked) Books other bloggers are talking about today.