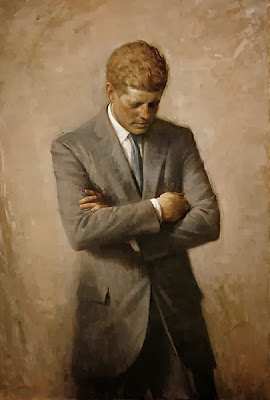 Today, November 22nd, is the 50th Anniversary of that dreadful day in Dallas, Texas, when a gunman destroyed not only a President and his presidency but any remaining traces of innocence my generation might have harbored. The death of a young President, happening so horribly, was the very last thing any of us would have ever envisioned. It was not only the shock, you see, it was the idea; if a President could be gotten at, than who on earth was safe? The world was suddenly turned topsy-turvy in a most terrible, unexpected way.

Gone in the shock of a few moments was the 'Camelot' of our dreams, the soft-spoken elegant wife - no longer the First Lady, those adorable children we'd become so fond of, the dogs, the ponies, the vigorous Kennedy clan coming and going at the White House, the very idea of an exuberant America on the brink of something grand.

How could this happen? No wonder an anguished Walter Cronkite (the most respected television newsman in America) cried on the air. This was an event that defied the imagination.

Fifty years later, it was just yesterday. A few days ago.

I still occasionally ask: how could this happen?

I was startled recently when standing on line at the supermarket, I happened to glance at the front page of a tabloid flashing autopsy photos of President Kennedy. My initial reaction was outrage. It still is. What has happened to us? How can it be that so many think nothing of such a deviant invasion of privacy? The plundering of a murdered man's dignity.

Along with assorted groceries, breath mints, potato chips and pictures of dim-witted celebrities, you're welcome to look at photos of a President's corpse.

How could this happen? 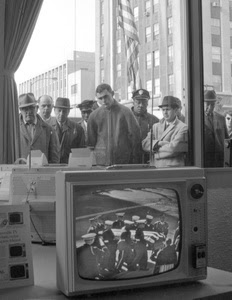 Watching the funeral in a shop window.
Chicago, November 1963
Posted by Yvette at 10:00 AM