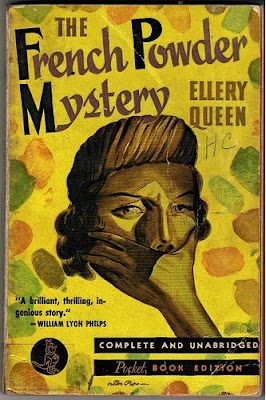 THE FRENCH POWDER MYSTERY has the greatest beginning - not surprising that the rest of the book doesn't quite live up to it. But this is still a pretty good puzzle mystery. An improbable crime, no question, but it has tons of mystery impedimenta and many suspects (which I love). And as usual Ellery gathers up clues like a human vacuum cleaner, but this time out (in the second Ellery Queen book in the series) he's not as annoying as he seemed in the first book. (Not reason enough NOT to read the books, by the way.) I do like the warmth of feeling between father  (Inspector Richard Queen) and eccentric son.

Cyrus French, retail giant and owner of French's Department Store in central Manhattan (sort of like Macy's) is also head of the Anti-Vice Squad - his own personal war on drugs, gambling and other assorted human vices. He is a man full of rectitude who doesn't realize that vice has slowly crept into his family sphere. Imagine his surprise and shock when his second wife's dead body makes a startling debut in a French Department Store window during a room and furniture design demonstration. When the model pulls down the wall bed, out pops the dead body of Mrs. Winifred French.

I loved the hubbub of horrified street-side gawkers, uniformed cops trying to keep order, the confused bustle of shoppers in the store being corralled before anyone knows what's really going on, store detectives attempting to take charge, executives and other hirelings running to and fro while Cyrus French takes one look at his wife's body and collapses. Fabulous furor. The sort of thing that starts a mystery off with a very satisfying bang.

When a harassed (the new Police Commissioner is an officious pain in the butt) Inspector Richard Queen arrives on the scene, his son Ellery in tow, they are met with the kind of Important Crime which must be solved asap if not sooner.

As if the murder wasn't enough, it turns out that French's step-daughter Bernice Carmody has gone missing and not only that, she appears to be a drug addict - unknown to the elderly French, head of the Anti-Vice Squad, as I mentioned. Talk about shock and awe.

Atop French's Department Store is a convenient apartment used exclusively by Cyrus French and other French family members as a kind of pied-a-terre and setting for important business meetings. Only a limited few have keys (with incised initials) to the pent-house which is reached by private elevator. The authors supply a handy map for the reader's edification.

What is the motive for this heinous crime? How are access to the apartment and the murder linked? Where is Bernice? Is this a case of unspeakable matricide? How is the wife's ex-husband, an imperturbable antique-dealer involved? What about the European interior decorator? And what to make of the mysterious doings in the store's book department? What about the board of directors who very conveniently were having a meeting that morning in the store-top apartment? Is it true that one of the store's directors was Mrs. French's lover?

Ellery soon figures it all out with the help of an old school friend who works for French's as the old man's assistant. As I said, it is all very improbable but I don't really mind - improbability is often key to a good mystery.

We have lots of suspects from which to choose and while I did, once again, pick the killer, it was more or less done by guess work on my part based on my own personal mystery reading experience and my recognition of certain mystery story telling tropes. So I take no credit.

I do find the final chapter in which Ellery lectures everyone - cops and suspects and even, the Police Commissioner - and grandly announces his methods and how the clues came together, a bit much. Okay, Nero Wolfe does the same, but it seems somehow more do-able when Wolfe does it.

I'm currently reading THE SIAMESE TWIN MYSTERY, so it's obvious I am immersed in all things Ellery Queen at the moment.

Don't forget to check in at Patti Abbott's blog to see what other Forgotten (or Overlooked) books other bloggers are talking about today.