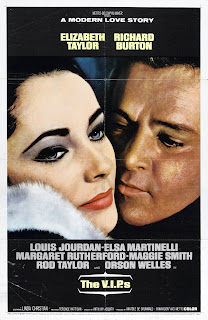 (Note that the poster claims this to be a 'modern love story'. The mind boggles.)

Watched it the other night, late at night, kind of in my zombie mode. (Just kidding, folks!) The sheer bloody-minded awfulness of it kept my interest until the very end. Some films are fascinating in their awfulness and this is one of them. Reason for watching in the first place? Well, obviously I must have been in the mood for an all-star Technicolor spectacle of human emotions run amok - set in an airport.

Who wouldn't want to watch a movie in which fate plays fast and loose with a bunch of Very Important Persons hemmed in by London fog (the atmospheric thing not the raincoat) at Heathrow. I mean, the story practically tells itself.

Before we go any further I have a confession to make: I saw this film the first time around in a theater near me. But I was young then - what did I know? Plus I wanted to see the famed duo of Elizabeth Taylor and Richard Burton fresh from CLEOPATRA scandal.

Back then, real life soap opera had dimmed the allure of movie soap opera, but not the allure of films set in an airport. Airport horror stories. It's the sort of thing that could happen to any of us. Right? And aren't we just a bit curious to see what goes on in the V.I.P. Lounge? That holy place denied to most of us?

At any rate, here's the plot and no I am not exaggerating. There are four main intertwined story-lines. Please remember that the rich are different from you and me. 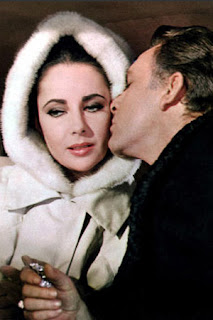 Richard Burton and Elizabeth Taylor play a married couple with Problems. Well, actually it's the wife who has the problem, he is oblivious to her Wretched Unhappiness. He is Paul Andros, billionaire tycoon too busy acquiring companies to notice that he is taking his wife Frances (Elizabeth Taylor) for granted.

Frances, notes pitifully that she would rather have a bunch of flowers from the 'five and ten' picked out personally by Paul, than yet another luxurious diamond bracelet picked out by a flunky. (May I point out that this is the sort of argument only the very rich seem able to make with a straight face.)  To add fuel to the marital discord, Paul has the audacity to give Frances a diamond bracelet just before she is due to depart (he thinks) on a plane to Jamaica. I mean, how dare he? 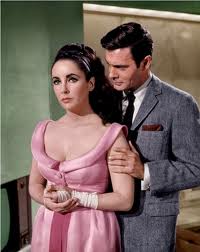 This churlish behavior is the main reason - unbeknownst to Paul - Frances is running off with playboy/gigolo Mark Campselle (gorgeous Louis Jourdan) who promises to change his playboy ways and settle down in New York with Frances.  He can't figure out what he'll do to earn a living but Frances reassures him that her father left her $300,000 (this was back in the day when this was 'real' money) - she will not begin her new life by taking any of Andros' largess. She has principle.

Keep this in mind: Frances has left a letter of goodbye in the one place that only Paul would know to look. It is meant to be found once the plane is in the air carrying Frances and Mark away to their new life. Uh-oh. 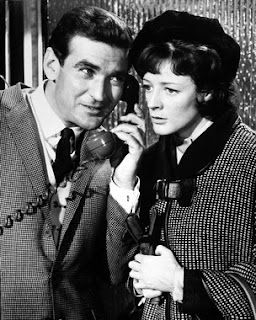 Rod Taylor plays Les Mangrum, head of Mangrum Tractors. He is in London fighting a take-over by Amalgamated Piffle - well, not really, but that's the name I always think of when the word Amalgamated shows up in text or conversation.

Keeping control of Mangrum Tractors (they make very good tractors) means everything to Les and his devoted secretary Miss Mead (Maggie Smith). But just when the deal seems done in Les's favor (reason why he's flying to New York), he is betrayed by a friend. To save his company, Les posts a check for more funds then he currently has in the company account. But it's okay, he reassures Miss Mead, he'll be in New York within a few hours and he'll take care of the imbalance then. Uh-oh.

Maggie Smith, as always, is a natural scene stealer - in particular in a key scene with Richard Burton late in the film. An actress who can do no wrong. 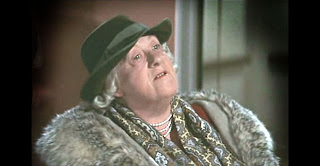 Margaret Rutherford (another natural scene stealer) in her Oscar winning role, plays the Duchess of Brighton - as unlikely a movie duchess as you will meet in her rumpled tweeds and floppy felt hat. To save her family home, the Duchess is flying to Miami to play hostess at some hotel (because of her title). She hates the idea but needs the money. Rutherford is wonderfully touching - another actress who can do no wrong.

Orson Welles plays Max Buda, a film producer of indeterminate nationality traveling with his mistress to Switzerland, where he lives to avoid paying British taxes.

The problem is that his financial deadline expires at midnight. Caught in England the next day, he will have to pay one million in taxes - something he very much wishes to avoid. Welles is unique, let's face it. One might tsk. tsk. to see him wasting his time in this sort of film, but in his own way Welles can't help but make you smile. The relationship with his little groveling accountant is quite funny. Welles just looks as if he's having a good time.

You know what they say about mice and men and plans. When a dense fog roles in, everyone is unexpectedly stranded at Heathrow - no planes can take off until the following morning.

Needless to say, the letter left behind for Paul Andros is found and read too soon. He shows up at the airport in fine fettle, carrying a gun in his pocket, ready to do anything to keep his wife from flying off with her intended. He cannot believe she would prefer a penniless gigolo to him - a captain of industry. Oh how little he understands Frances. Mark needs her, you dolt.

Mysteriously, Burton is photographed rather badly in this film. Not to put too fine a point on it, he looks in need of a bath. It's all that tacky airport lighting I suppose. He just looks icky. Not to mention that his acting is overwrought, his beautiful speaking voice wasted. In his scenes with Taylor he appears ready to pounce and devour her. Scary. And as usual when it came to these two, there is zero on-screen chemistry between them.

The other man, Louis Jourdan, for whatever reason, appears in need of a constant shave - and not in a good way. Although Jourdan, being so damned good looking, can get away with most anything. But his constant five o'clock shadow just adds to the general air of grubby grooming.

Miss Taylor (whom I have a sneaking fondness for) looks good, but is almost a caricature of herself. She is burdened with a horrible hair-do and clothes by Givenchy which don't flatter her short, womanly figure. I don't think she's photographed especially well either. Taylor was at the age when that caricature thing was setting in and really, would plague her for the rest of her career.

Of the four main stories told in the film, the Andros' soap opera is the least interesting. At least in my view.

A word about the sets: Were things really so ugly way back then? Everything plastic imitation leather and wood, drenched in orange, avocado and mustard? Yes, I'm afraid so.

But don't let me totally discourage you, if you're in a certain sort of mood, this film can be a fun way to wile away the time.

And of course - don't forget to check in at Todd Mason's blog, Sweet Freedom, to see what other Overlooked (or Forgotten) Films other bloggers will be talking about today.