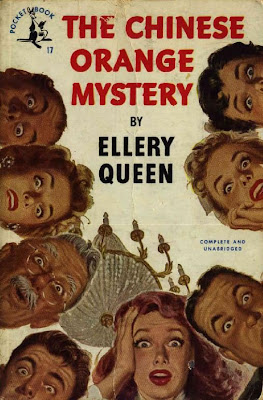 But not to worry, these may be the last two for awhile. If you know this blog then you're familiar with my occasional book frenzies. So do not be alarmed, it is a minor compulsion. I think.

THE CHINESE ORANGE MYSTERY (1934) is another Queen book that begins spectacularly (truth to tell all of the Queen mystery set-ups are pretty brilliant) and then, near the end sort of comes down to earth when all is revealed. The solution to this one is not as convincing as it should be and I did have to role my eyes a bit, but then that happens a lot with Ellery Queen. Still, I loved the book.

Here's my take: When an author (or authors) get you to love a book in spite of your misgivings, THAT, my friends, is audacious brilliance. 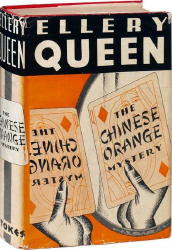 THE CHINESE ORANGE MYSTERY (LOVE that title) is a bewildering locked room puzzle. Locked room murders are a kind of sub-genre in mystery writing and when I'm reading one, I always prepare myself for a preposterous denouement (it's part of the give and take with these particular sorts of books). This mystery is no different, its reveal is Preposterous with a capital P - had to read the ending several times before I could make heads or tails of it.

This is another Ellery Queen peppered throughout with clever chapter headings (a Queen specialty) but missing the printed cast of characters (as in a play), something I find very useful with this kind of mystery. I guess in later books they did away with this little affectation which I quite liked.

Douglas Kirk, a faltering book publisher and collector of jewels and rare stamps lives, along with family members in a large suite of rooms at the Hotel Chancellor. His business offices are advantageously on the same floor, next door to the suite, so assorted other characters come and go (very convenient to the plot). Also on hand is the girl of Kirk's dreams, Miss Temple, who knows a lot about Chinese lore, since she spent several years there.

Ellery Queen's women characters are often more interesting than his male creations and Miss Temple is one of his best. Miss Temple's book on China (in the vein of Pearl Buck) is being considered for publication by Kirk, though his hard-drinking partner sneers at the idea. Kirk, smitten with Miss Temple and trying to break free from a designing femme fatale, is caught on the horns of a dilemma.

The fictional Ellery Queen, bibliophile and well-known mystery solver, is invited to dinner by Kirk and asked, with no further explanation, 'to keep an eye on things'. Intrigued, Ellery is on the scene when on the day of the dinner, an inexplicable (and rather outrageous) murder takes place in a locked room whose main door was always under observation by a hotel employee.

In that room is found the body of a mystery man. A stout middle-aged stranger who'd arrived earlier (without appointment) to see Kirk and was ushered into the waiting room by Mr. Osborne, philately associate and Kirk's keeper of the business gates.

When later, the room (unexpectedly locked) is opened, everything in it is a confusing jumble -  the furniture and even the dead man's clothing are turned backwards. Not only that, but the body has no identification on it. By the way, this is a mystery in which the actual name of the dead man is unimportant. 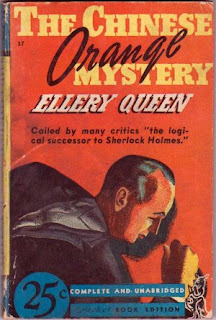 In the end, when events are explained all because of Ellery's insistence that the backward theme is the most important clue (the cops suppose it's only the doings of a maniac) I couldn't help but think that stripping a dead body and then re-dressing it backwards is no easy task. I still say it's impossible, given the time. But maybe that's just me. The incredibly swift (and convoluted) solution the killer puts into play when he discovers that the dead man has no neck tie strains credulity to the breaking point.

But we do get to learn quite a few interesting bits and pieces about Chinese culture and stamp collecting.

At any rate, despite my misgivings, I loved this book even if one of the main characters embodies a pet peeve of mine: the hysterical man. It's probably not politically correct, but I can stomach a hysterical woman much better than I can a man.

You can see that I am quite willing to overlook all sorts of things when it comes to Ellery Queen. As I said before, that's brilliance. Far as I'm concerned anyway. 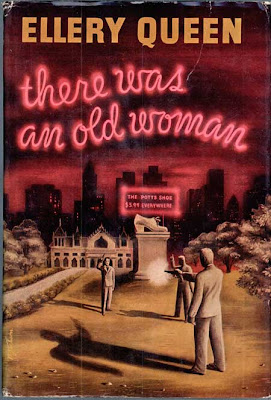 THERE WAS A OLD WOMAN (1943) has a kind of 'alice in wonderland' plot (though it owes a great deal to Mother Goose) with Ellery in the role of 'Alice'.

The outrageous, contentious, highly eccentric and very wealthy Potts family live in a huge Riverside Drive mansion in upper Manhattan, ruled with an iron fist by the elderly Potts matriarch, Cornelia Potts. Their fortune results from trade: Potts Shoes are America's Shoes - $3.99 Everywhere. On the grounds of the elaborate mansion sits an incongruous sculpture of a shoe over which a neon sign declares 'The Potts Shoe.' Hence the old woman who lived in a shoe analogy.

The cantankerous (and sickly) elder Potts dominates the lives of her six grown children, three from a first marriage, three from a second. The first three, spawn of Bacchus Potts (declared dead), are the apples of Cornelia's eye, despite their colorful general unpleasantness. The second three are the spawn of a certain Steven Brent who, forced to change his last name to Potts, lives in the house as an ineffectual shadow father. His progeny are the sane (and therefore resented) half of the family.

Steve Potts, nee Brent, is a mildly interesting character relegated to the background because of his wife's indifference and contempt. He shares his life with an old (unmarried) male friend who also lives in the house. Very odd relationship viewed from today's point of view. Are these two men sharing more than endless games of checkers? The author does not elaborate.

"Marry Steve - yes, ma'am. But Steve, he'll die without me, ma'am. He's just a damn lonesome man, ma'am," Major Gotch had said to Cornelia. 'Seeing that you're so well-fixed, seems to me it won't ruffle your feathers none if I sort of come along with Steve.'

...and Major Gotch moved right along in and settled down to share his friend's incredible good fortune and make himself, as he liked to say, thoroughly useless."

In fact, most of the Potts, except for Cornelia herself and the twin sons of the second marriage (both of whom successfully run the shoe company), are entirely useless. With maybe a reservation or two for the plucky heroine, Sheila Potts, Thurlow's half-sister, who catches Ellery's eye though she is engaged to the family's lawyer Charlie Paxton.

It is Paxton, a friend of Ellery's, who draws the amateur sleuth into the Potts family doings.

Thurlow Potts (Built incredibly like a baby kangaroo.), the eldest of the 'original' Potts and Cornelia's favored son is a pompous loony who passes the time bringing lawsuits against anyone who dares insult the family name. He revels in his grotesque pursuits and precipitates tragedy by challenging his half-brother to a duel. The contretemps with real guns is held on the grounds of the mansion with Ellery acting as an unwitting 'second.' 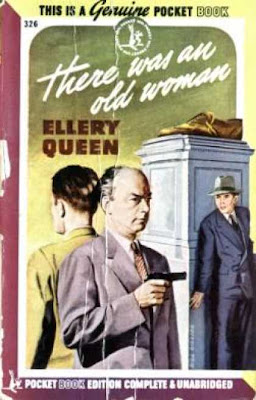 The old woman who lived in a shoe analogy adds a kind of grim ridiculousness to the Potts' deadly doings which result in two murders, a natural (and very convenient) death, forgery, general unhappiness and hysteria and the attempted murder of Ellery himself.

The crimes' solutions (there are three or maybe four) are as improbable and convoluted as anything ever dreamed up by the authors, the last taking place in the middle of a wedding. But again, I thoroughly enjoyed the book and recommend it highly.

These two books are particularly well-written, they shine with excellence and a sense of joy in the writing (imagined or real) which, I believe, must stem from the inventive genius of the author tandem of Frederic Dannay and Manfred Lee. 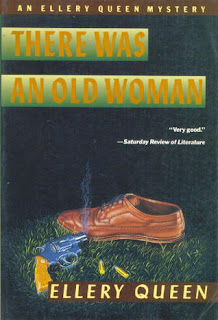 Mysterious Press has re-issued a bunch of Ellery Queen (though not, as far as I know, There Was an Old Woman - I got my copy at the library) titles in nicely done trade paper-back editions.
Posted by Yvette at 4:31 PM