NANCY DREW, REPORTER, a 1939 film directed by William Clemens starring Bonita Granville, John Litel and Frankie Thomas is based on the series of popular books by Carolyn Keene which for many girls (including myself) were reading rites of passage once upon a time.

The movie's not a bad way to waste a little over an hour if you're in the mood for a jaunty little mystery minus the mystery, but like the whole idea of Nancy Drew, girl detective, getting into improbable scraps while trying to nab a killer.

Truth to tell, my favorite parts are the scenes between Nancy and her father Carson Drew (played by John Litel). The comfortable house they live in is the sort of place many of us dreamed of when we were kids - it comes complete with spacious, homey interiors, a wonderfully classic staircase and a sweet old housekeeper. Looked at with 2013 eyes, it seems almost like life on another planet...

With a spot of murder thrown in for good measure.

As usual with these sorts of things, the cops don't have a clue (they're portrayed rather unflatteringly), the wrong person is in jail and it's up to Nancy Drew (along with her eternally hapless boyfriend Ted - Ned in the books) to set things to rights. In this story the two youngsters are hampered in their quest for justice by Ted-Ned's obnoxious younger brother and sister who tag along at inappropriate times and enjoy putting explosive devices under the hood of Nancy's car.

"Oh Ted, why do you have to have a little brother?"
"Ask my mother."

As part of a school project, Nancy and a few other students will spend three days 'working' for the town newspaper. Whoever does the best reporting job will win fifty bucks and a medal.

Nancy immediately gets involved in the murder case of Mrs. Lambert, a rich old woman who was killed with a rare chemical poison only available to photographers. The young woman currently accused of the crime lived in the house with the old woman and was keen on photography - uh oh. Of course there's a huge inheritance involved. The spoils have been left to the accused languishing in jail insisting (rather lamely) that she's innocent.

Soon Nancy and Ted are chasing around town in Nancy's nifty convertible roadster (my dream car), breaking and entering, absconding with evidence the police have overlooked (of course). Poor skinny Ted is then coerced into a ridiculous boxing match with a bad guy sporting a cauliflower ear, and when the kids stop to eat at a Chinese restaurant (complete with live band and a dance floor) they're forced to sing for their supper. (They're minus the 65 cents needed to pay the tab.) All in a day's work. 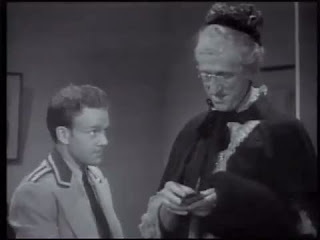 In the end, Nancy and Ted and a cop dressed like an old woman (Olin Howland pretending to be the kids' grandmother) set up a recording device to trap the real killer at a hotel in town all without benefit of police back-up - the way they did things in the old days. 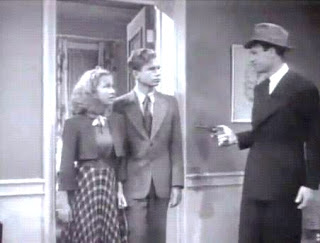 It's all preposterous fun plus Bonita Granville is adorable and Frankie Thomas is a cutie.


NANCY DREW, REPORTER is currently available to watch on youtube.

Don't forget to check in at Todd Mason's blog, Sweet Freedom to see what other Overlooked (or Forgotten) Films other movie mavens are talking about today.