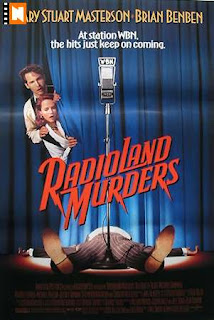 At first I thought this was the Woody Allen film about early radio, but once I read up on it on Netflix, I realized my error. I also realized about five minutes into the movie that a little of Brian Benben (an actor I am not familiar with) goes a very long way. Originally, I understand that Steve Martin was attached to this picture and boy he would have been perfect in the role of Roger Henderson, schleppy head writer for a new radio station set to take the airwaves by storm.

It's 1939 and radio is king. On the day of WBN's on air debut, the station's owner General Whalen, is in over-preening attendance as is a major unhappy sponsor (he never laughs and he hates the writing) plus a host of potential investors, not to mention a live radio audience in the studio eagerly waiting to be entertained - all blissfully unaware that a crazed murderer lurks among them.

The film was executive produced by George Lucas (he wrote the original story) and directed by Mel Smith.

This ought to have been a smash hit. I mean, with a premise like that - right?

But it was not to be.

RADIOLAND MURDERS was a humongous flop the first time around and a lot of the reviews online still label it a big stinkeroo.

But I'm a fan of the murders in a radio station atmosphere so I thought I'd take a peek. I'm kind of glad I did. 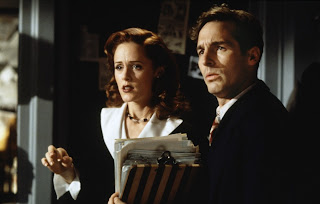 RADIOLAND MURDERS has a fabulous cast (even Benben sort of grows on you after a while, kind of like a crazed cousin who means well). It is the cast which makes it all worthwhile. The film  also has a wonderfully atmospheric beginning done at Industrial Light and Magic, George Lucas' kingdom of special effects. (In fact, much use is made of computer wizardry though you'd hardly notice. It's all done very well to great effect.)

But back to the cast. Let me list the actors:

Ned Beatty is the radio station's owner, General Walt Whalen, a guy who runs the station as if his employees were enlistees.

Baby-faced Scott Michael Campbell is Billy the station page, a boy in ridiculous uniform who has Aspirations. His mom and pop are in the audience hoping for a glimpse of their son doing Something.

Jeffrey Tambor (wearing a most conspicuous hair piece) is the director, Walt Whelan, Jr.
.
Christopher Lloyd is Zoltan the backstage sound effects man who huffs and puffs his way through the whole movie never leaving his backstage lair.

Stephen Tobolowsky is the sound chief. You'll remember him from the television classic, Mary Hartman, Mary Hartman. And if you don't, you should.

The ultra wonderful Broadway transfer Anita Morris is Claudette Katsenback, The Va-Va Voom Girl, femme fatale and sultry singer. This woman should have been a HUGE star.

Harvey Korman is a writer who spends the entire movie in a drunken stupor (not much of a part, but it's always nice to see Harvey anytime, anywhere). 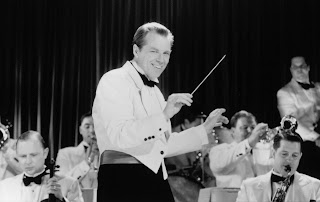 And best of all, there's Michael McKean. He is Rick Rochester, the harried and much put-upon orchestra leader. Let me just say, I ADORE Michael McKean. He can do no wrong as far as I'm concerned and if you need any reason to watch this film, he's reason enough. 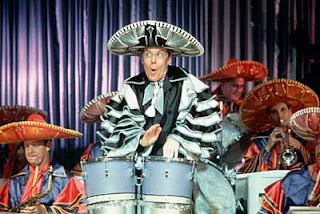 I love this guy's face. The way he reacts on camera, just watching him doing nothing makes me smile. He throws himself into this part and you can see by his gleeful expressions that he's apparently having a lot of fun.

Added to the cast are special appearances by George Burns, Rosemary Clooney and Billy Barty as radio acts. On the revolving stage, bands (swing, western, blues, opera, you name it), singers and assorted 'acts' entertain in between various programs: a detective show, a thriller show, an adventure show, a cowboy show, a soap opera, a caveman show and other assorted radio favorites. All accompanied by raucous sound effects created by the indefatigable Zoltan.

All brought to you at the speed of sound.

Once the station goes on air, nothing, not even murder can stop its forward motion. It's a barely controlled behemoth kept in check by frenzied behind the scenes activity. The much-put-upon writers deliver new dialogue to the on-air actors who suffer through constant re-writes most of which make little sense. And in between, girl groups sing and dance the requisite commercials. (This is almost the best part.) 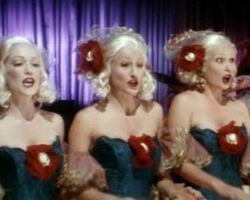 The entire movie takes place inside the radio station during its debut broadcast, though bits and pieces occur on various window ledges and then near the end, up on the roof and the tall radio tower. The excellent editing by Paul Trejo is super-quick and beautifully synchronized, cutting back and forth between backstage, front-stage, audience and studio control room. Not to mention, the underneath gears of the revolving stage.

I loved the sound editing, fully integrated as we move between singing, music, screeching, screaming, dancing, talking, murders, all the while Roger trying to get his wife back (she thinks he cheated on her) and facing a revolt of the writing staff who hasn't been paid in weeks. 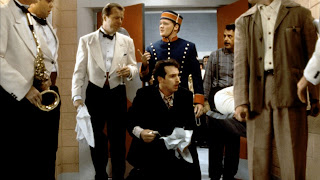 Through a set of convenient circumstances, Roger becomes the main suspect - no surprise there. The bunch of keystone cops then begin chasing him around the studio while he tries to find the real killer as one after another, the victims topple.

It's all a throw-back to the frantic screwball comedies of the thirties complete with lots of physical comedy, pratfalls, fast talking and the like. Most of it works for me.

Now for the bad news:

As I said, I'm not crazy about the leading man played by Brian Benben. I'm not crazy either about the guy who plays the homicide detective in his usual very unfunny over-the-top fashion, Michael Lerner.

As for the movie's pace, near the end, it all begins to pall. The shticks slacken, the film becomes wearily insistent if you know what I mean. A movie like this needs spontaneity, or the appearance thereof. But RADIOLAND MURDERS begins to run out of gas in the last quarter of the film.

Even though the bad guy is bumped off in an inventive way (think KING KONG) and the murder motive is a rather amusing one - I can say no more - by the final denouement and the requisite chase for the murderer, I was getting a bit restive and wishing the movie would end already. I hate when that happens.

But on the whole, I'd rather have seen this than not. I'm thinking you'll feel the same way.

Don't forget to check in at Todd Mason's blog to see what other Overlooked (or Forgotten) Films other bloggers are talking about today.
Posted by Yvette at 11:55 AM