This is a nifty little black and white Cold War thriller set mostly in a generic Balkan police state of the kind familiar to us from 1950's flicks. It features the Hitchcockian motif of well-meaning amateur thrust into danger which for what ever reason, always seems to work. Maybe because we're all Walter Mittys at heart? Author Eric Ambler made very good use of this trope in his books.

Gosh I love those unnamed Balkan states, so useful for all sorts of deadly movie doings back in the day.

Our story begins in England where  beautiful, but lonely and unmarried (most men think her vocation is disgusting, I mean, BUGS!) entomologist Frances Gray (Margaret Lockwood) is asked to do a simple enough sounding good deed for her country. At first, hesitant (as well she should be), she then decides to give it a go. After all, the danger is minimal. Yeah, right.

In fact, the whole idea of this mission is absurd, but since when has that ever stopped any plucky heroine?

Frances is addicted to the thrilling radio adventures of Frank Conway and his pal Rusty as they take care of the bad-guys and leave their devoted audience with a weekly hair-raising cliffhanger. Frances claims she only listens to the Conway show in order to repeat the stories to her nephew. Explanation: The boy is prevented from listening to the radio until he finishes his homework.

Her British government contact, Mr. Hedgerley (Naunton Wayne of Chalmers and Caldicott fame) realizes her fondness for the show and has Frances traveling as Frances Conway. Well, you didn't think she'd travel under her own name did you? False papers are a must. She is supposed to be a scout for a tourist agency, heading to this Balkan police state to check out tourism possibilities - though she knows nothing about the country except for some last minute crib notes handed her by Hedgerley. Yeah, that'll work.

The mission: find out if scientists in this unnamed country (or if it is named, I didn't catch it) are breeding diseased bugs as potential biological war weapons. You'd think this sort of thing which seems rather important to my untrained eye, would be handled in a more professional seeming fashion by the Brits, but then we wouldn't have a story. And anyway, no offense meant, but don't the British excel at this sort of bumbling spy-work?

Frances Gray may be a good entomologist, but she makes for an amateurish spy not even bothering to really hide her microscope (she thinks putting it in her handbag and tucking the handbag under her train seat will work). Women have been known to carry a multitude of things in their handbags, but a laboratory microscope? At any rate, Frances is unfortunate enough to find herself sharing her train compartment with Commandant Razinski, Chief of Police of said unnamed Balkan state. He is played with total gusto by Marius Goring in a very sinister fashion. (He really appears to be having a great deal of fun being bad.) 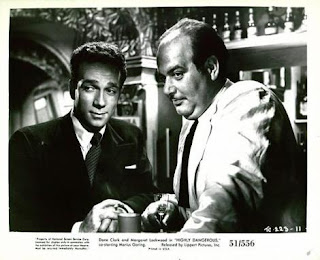 Razinski finds the pocketbook under the seat (well, the straps are in full view) and from that moment on, Frances is under suspicion. She unwittingly gets her contact killed once she arrives in town and must turn to an American reporter Bill Casey (Dane Clark) for help to carry out her mission. He's in it for the story and she's in it to save mankind. You know how that goes. 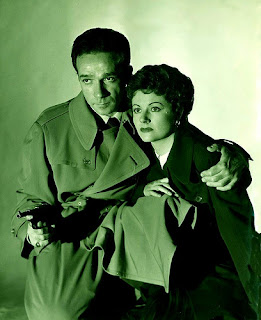 Dane Clark is a strange movie presence. He starred in many two-bit B films of the fifties and always delivered, usually as a hood. He had an odd, almost homely, large featured face and he began to lose his hair early. He really should not have been a leading man and yet he was and got away with it. In this film he plays stooge to the lady entomologist, risking life and limb to carry out a hair-brained plan (inspired by the exploits of Frank Conway and his pal Rusty) which has little chance of working. 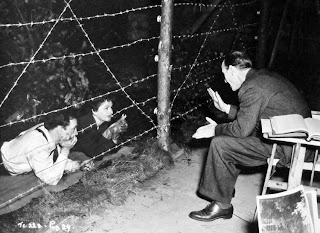 Except that, with a few dangerous blips, it does. Frances and Bill get samples of the bugs and then must get them back to England with the police and Razinski hot on their tails.

Here Frances wears the ugliest cat's eye sunglasses I've ever seen. Though in truth I probably wore the same pair once upon a time. Ha!

The movie was mostly filmed indoors at Pinewood Studios in England and it shows. Lots of rear projection and outdoor shots shot indoors, that sort of thing.

It's not the tightest thriller I've ever seen, nor even the most thrilling, but it has its moments. (Some rolling of the eyes is called for but then, that's usually the case with these sorts of films.) What makes this film worth a look is the sparkling cast.

Who couldn't like a film which starred Margaret Lockwood, Dane Clark, Marius Goring (chomping on a cigar throughout), Naunton Wayne, Wilfred Hyde-White (LOVE this man) as the British consulate, Michael Horden as Frances' boss at the lab, and in a short part done very well, Eugene Deckers. A terrific cast.

But still, while watching, I couldn't help wondering what Hitchcock might have done with the same material.

Don't forget to check in at Todd Mason's blog Sweet Freedom to see what other overlooked or forgotten films other bloggers are talking about today.

HIGHLY DANGEROUS is currently available for streaming on Netflix.